Kansas cruises to 81-65 win over Villanova in Final Four 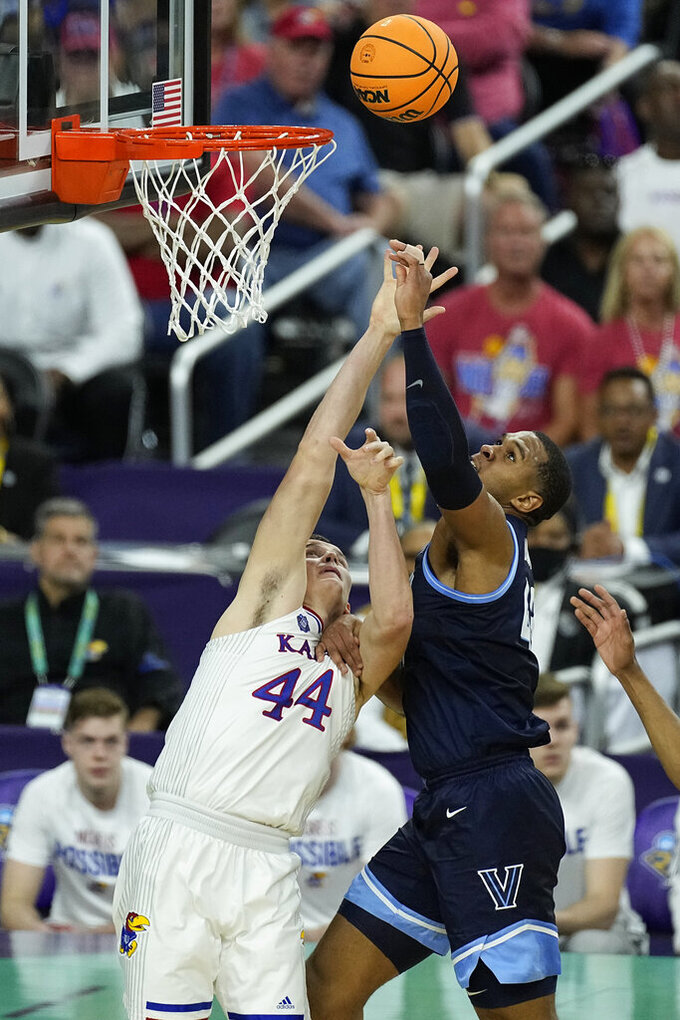 Kansas' Mitch Lightfoot (44) battles Villanova's Eric Dixon for the rebound during the first half of a college basketball game in the semifinal round of the Men's Final Four NCAA tournament, Saturday, April 2, 2022, in New Orleans. (AP Photo/Gerald Herbert) 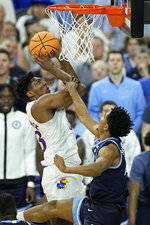 NEW ORLEANS (AP) — Ochai Agbaji followed a celebrating stream of Kansas players off the floor at the Final Four, their shouts of “One more!” echoing all the way up the tunnel of the Superdome and right to the door of their locker room.

One more game awaits, the biggest of their careers.

The Jayhawks earned a trip back to the national championship Saturday night with a shooting performance that will go down in history. David McCormack muscled his way to 25 points, Ochai Agbaji hit six 3-pointers and had 21, and the only No. 1 seed to reach the national semifinals rolled to an 81-65 victory over Villanova before a huge crowd that packed the home of the New Orleans Saints one year after the pandemic kept just about everyone away.

Well, they can look forward to a big-time showdown now: The Jayhawks, the winningest program in Division I history, will face North Carolina, which sits at No. 3 on the list and has been to more Final Fours than anyone.

The Tar Heels sent Duke coach Mike Krzyzewski into retirement with an 81-77 victory in their semifinal Saturday night.

The Jayhawks (33-6) hope a familiar pattern holds, too: The last three times Kansas and Villanova have met in the tourney, the winner has gone on to cut down the nets, including their lopsided Final Four matchup four years ago in San Antonio.

Playing without injured guard Justin Moore, the Wildcats (30-8) watched as Kansas scored the game’s first 10 points and eventually built a 19-point cushion Saturday night. And despite big performances from Collin Gillespie, Brandon Slater and Jermaine Samuels, the short-handed and undersized Wildcats never made it all the way back.

Gillespie, playing in his 156th and final game for the Wildcats, hit five 3-pointers and finished with 17 points, while Slater hit four 3s and had 16 points. Samuels finished with 13 points in the final game of his career.

“They played great. They were well-prepared. They really executed,” Villanova coach Jay Wright said. “We did a lot of things wrong, but we want to make sure they get the credit they deserve. They played a great game.”

Each team finished with 13 made 3-pointers, and the 26 total shots from beyond the arc set a record for a Final Four game, topping the 25 that the same two teams made in 2018 at the Alamodome.

Unlike that night, though, it was the Jayhawks who pounced on Villanova at the start, trying to run ragged a team whose depth problems were only compounded by the loss of Moore, who tore his Achilles tendon in the regional finals.

The Jayhawks applied pressure the moment Villanova inbounded the ball. They unleashed traps in half-court, something they rarely did in the regular season. And they twice picked the pocket of Gillespie, a two-time Big East player of the year, leading to easy baskets and a 10-0 lead before some of the 70,000-plus fans had even found their seats.

“We got off to such a great start in large part because of how we shot the ball,” Kansas coach Bill Self said.

Whenever Agbaji, the Big 12 player of the year, wasn’t enjoying the soft rims of the Superdome to knock down 3s, the 6-foot-10, 250-pound McCormack was having his way with the undersized Wildcats in the paint.

The Jayhawks’ lead soon stretched to 15 midway through the first half before Wright finally called timeout.

His counterpart could probably relate: In a game that Self has been loath to re-watch, the Wildcats raced to a 22-4 lead out of the gates four years ago and cruised to a Final Four blowout and eventually their third national championship.

“This is legit revenge for 2018,” tweeted the Mavericks’ Jalen Brunson, who had a big role for Villanova that night.

Daniels and Gillespie did everything they could to rewrite the finish.

Daniels, the New Orleans native who began his career down the road at Tulane, kept making hustle plays around the hoop, and Gillespie, the blue-collar kid from Philadelphia, was able to knock down a couple of contested 3s.

The Jayhawks still led 50-34 early in the second half when Wright went to a smaller lineup and ramped up the pressure on defense. The result was three consecutive turnovers, and quick 3-pointers by Slater and Antoine — the seldom-used guard who absorbed many of Moore’s minutes — that allowed Villanova to trim the lead to single digits.

“We felt like we were right there,” Gillespie said. “It’s a long game, it’s a 40-minute game, and we pride ourselves on playing 40 minutes every night. And we were just talking about dig, scrap and claw and try to steal it in the end.”

McCormack finally made Villanova pay for going small with a rim-rattling dunk with 10:25 to play.

And when the Wildcats made one last run, getting a three-point play from Samuels to close within 64-58 with just over 6 minutes left, McCormack and Braun answered again. The latter's deep fadeaway 3 as the shot-clock expired gave Kansas some breathing room again, and the Big 12 champs coasted from there into Monday night's title game.

“You knew Villanova would make a run and we just kind of held on and responded,” Self said, “but I thought we played great. I thought we were disciplined defensively. I thought we stayed down on shot fakes, basically, for 40 minutes. And with the exception of defending the arc, I thought that we just played terrific.”

The Jayhawks will play for the championship on the same Superdome floor where they lost to Kentucky in the 2012 title game. Kansas allowed the Wildcats to build a big early lead that night before its comeback bid fell short.

Kansas and North Carolina will play for the seventh time in the NCAA Tournament, and five of those games have occurred on the final weekend. That includes the triple-overtime 1957 title game won by the Tar Heels in Kansas City, Missouri.

Kansas committed just seven turnovers while Villanova had nine. ... Self coached his 75th tournament game, breaking a tie with Michigan State's Tom Izzo for fifth on the career list. ... Villanova dropped to 5-6 when its opponent scores at least 70 points this season. ... Gillespie and Slater were 9 of 15 from beyond the arc; the rest of the Wildcats were 4 of 16.