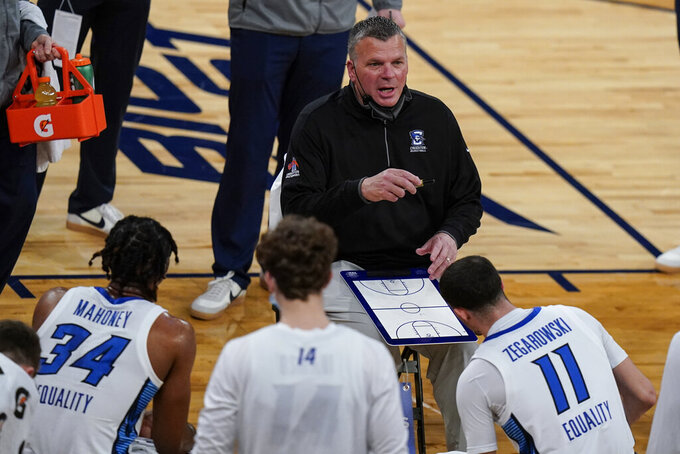 Creighton head coach Greg McDermott talks to his team during the first half of an NCAA college basketball game against the Butler in the Big East conference tournament Thursday, March 11, 2021, in New York. (AP Photo/Frank Franklin II)

NEW YORK (AP) — With coach Greg McDermott back on the bench after a one-game suspension, No. 17 Creighton seemed to put a tense 10 days behind and have some fun.

The veteran Bluejays cruised into the semifinals of the Big East Tournament with an 87-56 victory against Butler on Thursday night.

Second-seeded Creighton (19-7) moves on to face No. 3 seed Connecticut on Friday night at Madison Square Garden after the Huskies routed DePaul 94-60 in the last quarterfinal.

McDermott was suspended for the final game of the regular season for making racially insensitive remarks to his players. The 56-year-old coach created a firestorm by twice using the term “plantation” as part of an analogy urging team unity after a recent loss.

“I’m proud of those guys in the locker room,” McDermott said in a postgame interview with FS1. “They were really forced to mature a lot in the last 10 or 12 days because someone they really trusted made a mistake. And it was a hurtful mistake to them. We had to work our way through it. I’m proud that they allowed me to pour my heart out to them and at the same time poured their heart out to me so that we could come on this court tonight, come together and try to put our best foot forward. And obviously they did that. It’s been a tough 10 days, without question, and that’s all on me.”

The university suspended McDermott indefinitely after he coached the team in a loss last week at Villanova. He missed the season-finale victory at home against Butler on Saturday and was reinstated Monday.

“We’ve had a lot of conversations obviously over the last 10 days. Especially in New York. More one-on-one with me. Just continuing to work through this process," McDermott said in his postgame news conference. "But the message I left all of them with is you have to enjoy this.”

McDermott’s return went off drama-free in a mostly empty MSG, pulling his face mask up and down to periodically give directions.

Creighton scored the first seven points and was never challenged.

Zegarowski made two 3-pointers within the first two minutes of the second half to put Creighton up by 20.

McDermott was able to clear the bench over the final six minutes and let little-used reserves such as Devin Davis and Andrew Merfeld, son of longtime assistant coach Steve Merfeld, get on the scoreboard.

That got a charge out of the small contingent of Creighton fans in the building as well as the Bluejays starters on the bench.

“We're at our best when we're hootin' and hollerin' and smiling and laughing. That's when this team functions at its best,” McDermott said.

Zegarowski re-iterated his support for his McDermott.

“He’s not only a great coach, he’s a great person to have in your corner,” Zegarowski said. “He’s a real role model for all of our guys.”

The junior guard added: “It’s great to have him on our side. I feel really good when he’s out there coaching us up.”

Bryce Nze had 21 points to lead No. 10 seed Butler (10-15), which trailed by 33 in the second half after edging seventh-seeded Xavier 70-69 in overtime Wednesday night.

“When they got away from us, we just couldn't reel them back in,” Butler coach LaVall Jordan said.

Butler: The Bulldogs were depleted by injuries this season and finished with a losing record for the first time since 2013-14, their first season in the Big East.

Adding to the misery, freshman guard Myles Tate was helped off the court with a left knee injury in the second half. Jordan said it was too soon to tell the extent of the injury.

Creighton: The Bluejays' only real issue came in the first half when Jefferson caught some friendly fire under the basket. He and teammate Alex O'Connell turned into each other and collided face first. Both players went to the floor and stayed there for a few minutes.

Jefferson had a bloody nose. O'Connell came away in better shape, but both left the game to get checked in the bench area. Blood had to be mopped from the floor where Jefferson went down. He re-entered after the under four-minute timeout with a big white wad of what appeared to be gauze or tissue plugging his right nostril.

Creighton went 2-0 against UConn this season. The BlueJays are in the Big East semifinals for the third time since joining the conference in 2013 and first time since 2017.