No. 13 Creighton comes off layoff with 77-53 win over DePaul 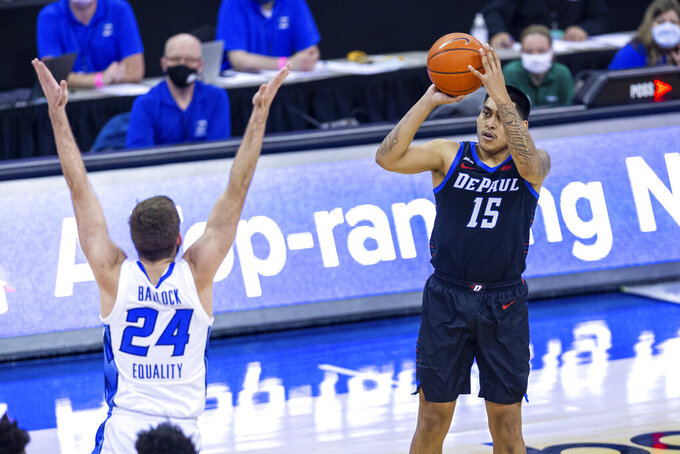 The Bluejays (17-5, 13-4 Big East) have won seven of their last eight games, including four straight.

DePaul (4-11, 2-11) sustained its most lopsided loss since a 38-point defeat to Providence last March.

Creighton was playing its first game in 10 days because of a regularly scheduled break. The Bluejays sputtered a bit early before finding their rhythm, and they closed the half on a 21-5 run to lead 34-23.

Creighton scored 11 of the first 13 points of the second half to put the game away, with the lead ballooning to as many as 30 points.

DePaul was coming off its best performance of the season, an 88-83 win at St. John's on Saturday in which it shot 63% from the field, tied for the best mark in the Big East this season.

The Blue Demons got out to a quick 11-3 lead against the Bluejays, but after making 4 of 8 shots to open the game, they went 5 for their next 25 as Creighton pulled away.

DePaul finished at 35.5% from the field, with Romeo Weems and Charlie Moore scoring nine points apiece. Moore had entered the game as Big East player of the week after scoring 24 points and recording eight assists against St. John's.

Creighton: The Bluejays beat DePaul for the 14th straight time and remain in contention to win or share the conference title with two of their last three regular-season games on the road.