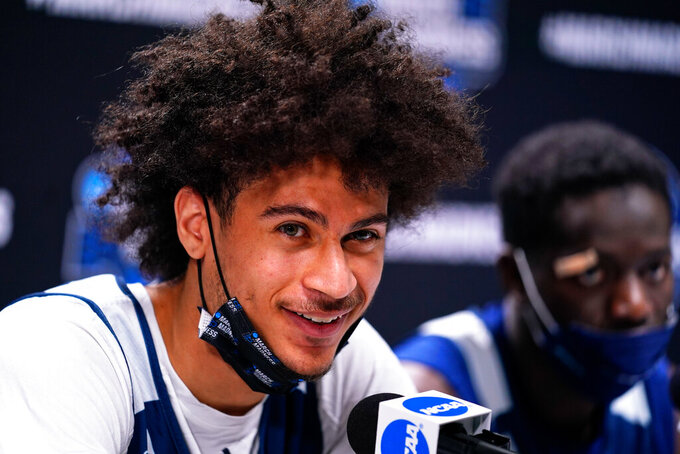 JERSEY CITY, N.J. (AP) — Three of the stars of Saint Peter's remarkable run to the Elite Eight have put their names in the transfer portal following coach Shaheen Holloway's departure for Seton Hall.

Starting guards Daryl Banks III and Matthew Lee and backup Doug Edert tweeted about their moves Wednesday. All thanked the little Jesuit university in Jersey City, New Jersey, for the past three years. They said they wanted to see what opportunities awaited them in basketball.

Players who enter the portal are letting other schools know they are considering a transfer. Peacocks big man and three-time Metro Atlantic Athletic Conference defensive player of the year KC Ndefo entered the portal last year but returned to Saint Peter's.

Holloway, who led the Peacocks to the MAAC Tournament title and wins over No. 2 seed Kentucky, No. 7 seed Murray State and No. 3 seed Purdue in becoming the Cinderellas of this year's NCAA Tournament, was hired by Seton Hall, his alma mater, on March 28. It happened a day after national runner-up North Carolina routed Saint Peter's for a berth in the Final Four.

Saint Peter's is still searching for a new coach. The players' decision to enter the portal might be seen as keeping their options open if they have concerns about who gets the job.

Lee averaged 6.8 points and had a team-high 87 assists. Edert averaged 9.5 points coming off the bench most of the time.