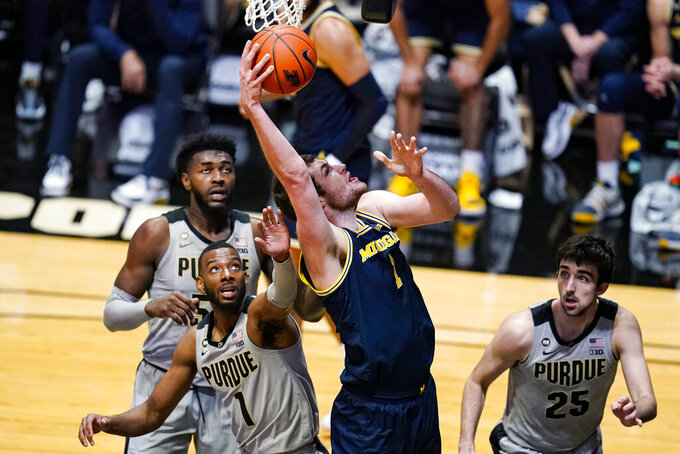 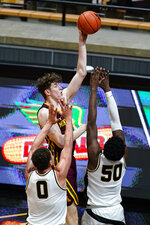 MINNEAPOLIS (AP) — Liam Robbins needed a couple of calculated steps of development before he plunged into major college competition, a late-blooming 7-footer now in his first season with Minnesota who has proven he belongs in one of the toughest conferences in the country.

The transfer from Drake found quite the collection of big men waiting for him.

“They’re finding a way to our league a lot more than other leagues, maybe. It’s amazing the amount of bigs we have in this league that are really good,” Gophers coach Richard Pitino said.

There are 33 players on Big Ten rosters listed at 6-10 or taller, covering every team except Penn State. That includes nine 7-footers. With freshman Zach Edey (7-4) backing up Williams, Purdue is also one of four teams with two 6-10-plus players among their top five scorers.

“Some leagues have two or three good big guys. I mean, this is like every single team has a big guy that can play and can play anywhere. So it’s very, very challenging,” said Rutgers coach Steve Pikiell, whose team boasts two of the best defensive centers in the conference with Myles Johnson (6-11) and Cliff Omoruyi (6-11).

Minnesota visits Rutgers on Thursday in the latest test for Robbins. His first two Big Ten contests came against Cockburn and Garza. Eight games into the conference schedule, Robbins had faced Garza twice, Dickinson twice, Cockburn and Wisconsin's tandem of Potter and Reuvers.

"You’re going up against guys just as big as you,” Robbins said. “You just have to be physical, and every time down the court you have to be fighting for position constantly. I think that’s been the biggest adjustment.”

He's had a lot of those in the last few years.

Robbins had an 8-inch growth spurt between his junior and senior seasons while playing sparingly for Assumption High School in Davenport, Iowa, and hit the 300-pound mark. That's when having a basketball-heavy family came in handy. Two of his uncles are college assistants — Duffy Conroy with Louisiana Tech and Ed Conroy at Minnesota — and helped him and his parents settle on a year of prep school at Sunrise Christian Academy, a powerhouse program in Kansas.

Through intermittent fasting off the court and intense competition on it, Robbins reduced his weight to 235 pounds and drew scholarship offers that hadn't been there before. He picked Drake.

“The fact that he was able to stay disciplined and change his body and keep his confidence up and not get beaten down, I think that speaks volumes about how he was raised,” Ed Conroy said.

After two seasons of steady improvement with the Bulldogs in the Missouri Valley Conference, one of the strongest mid-major leagues in the sport, Robbins believed he was ready to turn his desire to play in the Big Ten into reality.

Pandemic conditions made campus visits unavailable, so Robbins was going to have to take a little bit of a leap of faith wherever he was going to go. So his mother called her brother to explore the option of Minnesota, which was all the more appealing with not only an uncle as an assistant on staff but a cousin, Hunt Conroy, a senior guard on the roster.

After losing center Daniel Oturu to the NBA, the Gophers conveniently had a spot in the lineup. Pitino even teased Ed Conroy for not luring Robbins to the program earlier.

“He really does love the game. That's why he's able to make some of these adjustments. Even though he has an edge about him, he's pretty even keel," said Ed Conroy, whose older son, Riley Conroy, is on staff at Southeast Louisiana. Formerly the head coach at Tulane and The Citadel, Ed Conroy is also the cousin of the late author Pat Conroy.

Robbins, who leads the Big Ten in blocks (2.8 per game) and is 10th in the league in rebounds (6.9), was recently named to the list of 10 candidates for the Kareem Abdul-Jabbar Center of the Year award by the Naismith Memorial Basketball Hall of Fame.

“We think we’ve got a really good one there. He’s going through it on the fly a little bit just because he hasn’t experienced it, but it’s great to see him succeed,” Pitino said.

Garza has enviable range, going 26 for 57 on 3-pointers this season for a robust 45.6% clip. Robbins can pop off a pick and let a shot fly from behind the arc, too, with 16 makes in 42 attempts (38.1%). That's the way the NBA game has gone, with an increasing value placed on power forwards and centers who can score from all over the floor rather than from their traditional spot on the blocks.

“I just wish we would appreciate them for what they are in college and kind of go from there," Pitino said. "I know a lot of these big guys want to showcase their skills to hopefully get to the next level, but you’ve got to embrace what helps the team win as well, and in this league specifically people seem to be doing that.”