South Preview: 'Nova vs. Michigan again at site of '18 title 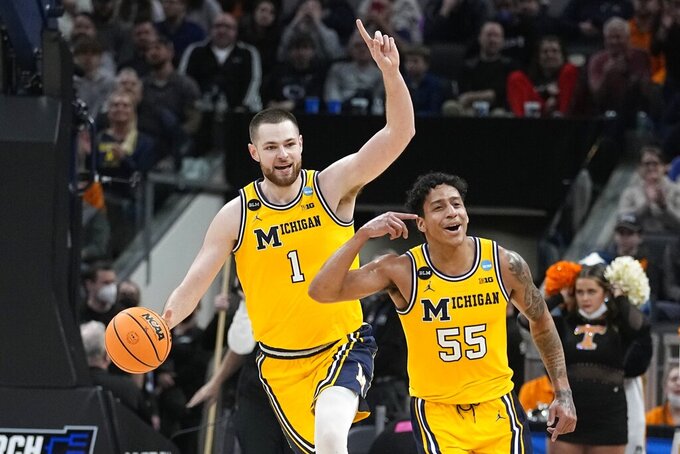 FILE -Michigan's Hunter Dickinson (1), and Eli Brooks (55) celebrate after they defeated Tennessee in a college basketball game in the second round of the NCAA tournament, Saturday, March 19, 2022, in Indianapolis. Michigan, one of four double-digit seeds still playing, is in its fifth consecutive Sweet 16. Only No. 1 overall seed Gonzaga at seven in a row has a longer active streak. Michigan meets Villanova on Thursday, March 24, 2022. (AP Photo/Darron Cummings, File)

SAN ANTONIO (AP) — Collin Gillespie, Jermaine Samuels and Villanova are back in the city of the Alamo for the first time since winning the national championship there four years ago. Even the opponent is the same, though in a different arena for this somewhat unexpected Sweet 16 matchup against Michigan.

Gillespie and Samuels, true freshmen during that 2018 NCAA Tournament title run, are now graduate students and four-year starters who got an extra season of eligibility because of the pandemic.

“We were just role guys on a team with six guys who had been in big games before. So we learned a lot from those guys and the preparation that it takes to get to that point,” Gillespie said Wednesday. “Now that we’re back in San Antonio, it doesn’t really ... like the two don’t really correlate.”

Gillespie, a third-team All-American and the Wildcats' leading scorer at 16 points per game, has started 121 games since having four points and five rebounds in 16 minutes during that 2018 title game. Samuels only got on the floor for the final 10 seconds of the 79-62 win, but has since started 110 games.

Second-seeded Villanova (28-7) and No. 11 seed Michigan (19-14) meet in a South Region semifinal Thursday night at AT&T Center, the home of the NBA's San Antonio Spurs about three miles from the Alamodome that hosted the 2018 title game. The Wildcats were also the 2016 champs, in Houston, about 200 miles away.

Top seed Arizona (33-3) plays No. 5 seed Houston (31-5) in the other South semi. The Wildcats had to survive overtime against TCU in the second round. The Cougars, a Final Four team last season, are much closer to home after starting this NCAA tourney in Pittsburgh.

Michigan, one of four double-digit seeds still playing, is in its fifth consecutive Sweet 16. Only No. 1 overall seed Gonzaga at seven in a row has a longer active streak.

The Wolverines alternated wins and losses over their last 10 games before the 68-team NCAA Tournament field was set, and played their last five regular-season games without suspended coach Juwan Howard. They then had to overcome halftime deficits against Colorado State and Tennessee in the NCAA's first two rounds, getting their first back-to-back wins in nearly six weeks.

Eli Brooks, who chose the Wolverines over Villanova in recruiting, is getting ready for his 14th NCAA tourney game. The guard is the only current Michigan player who appeared in the 2018 title game, playing the final three minutes.

After big man Hunter Dickinson pointed out Brooks' time at Michigan was a common denominator in the school's five consecutive Sweet 16s, Brooks quickly interjected, “I've only got four of them. I can't take credit for all five.”

Michigan lost three of its top four scorers from that 2018 team. Jalen Brunson and Mikal Bridges were among four Villanova players drafted by the NBA soon after that title game, and those were the guys who helped set the tone for Gillespie and Samuels.

“They watched the leadership of Jalen Brunson, Mikal Bridges, and they really learned from that and they’ve become the same kind of leaders,” Villanova coach Jay Wright said. “When you had Jalen and Mikal and guys like that, you never think you’re going to get leaders like that again. Then you watch Collin and Jermaine and you realize, if you have guys like that, there’s a chance they can pass it on.”

Houston went into this season having to replace four starters from the Cougars' first Final Four team since advancing that far three years in a row during the Phi Slama Jama era from 1982-84.

Then Marcus Sasser, the lone returning starter and the Cougars' leading scorer, broke a bone in his left foot before Christmas and hasn't played since. Sophomore guard Tramon Mark, who played 20 minutes in the national semifinal last year, had already been sidelined for the season by a shoulder injury after seven games.

“I think all coaches go through that. I don't think that makes us special of unique,” coach Kelvin Sampson said. “I guess the blessing was it happened early in conference season.”

That allowed the Cougars to adjust from almost solely depending on their guards to being more inside-out with senior posts Fabian White Jr. and Josh Carlton, both first-team American Athletic Conference picks. They still have guards Kyler Edwards, sophomore Jamal Shead and senior Taze Moore.

Edwards, a Texas Tech transfer who played in the 2019 national championship game, has 40 points in this NCAA tourney with 10 made 3-pointers.

Villanova's Jay Wright and Houston's Kelvin Sampson both had a bottle of wine and other gifts waiting for them in San Antonio from Spurs coach Gregg Popovich.

Wright was on Popovich's staff with the gold medal-winning team at the Olympics last summer, and had worked with USA Basketball before that. Sampson was a consultant for the Spurs for several months in 2008, spending time directly with Popovich after getting fired by Indiana.

With the NCAA regional games at their home arena, the Spurs are on a four-game road trip.

Sampson went to the Spurs practice facility, where Popovich had left him a bottle of win, a nice note and a bunch of Spurs gear.

"I felt like a camper. Except you wouldn’t give wine to a camper, would you?,” Sampson said.

Wright also got a bunch of suggestions from Popovich about what to do while in town.

“Pop gave me hotels, restaurants, everything," Wright said. “I told him, ‘Pop, this is college basketball, man. I’m with these guys morning, noon, and night. I don’t leave these guys. We don’t go out to dinner.’”