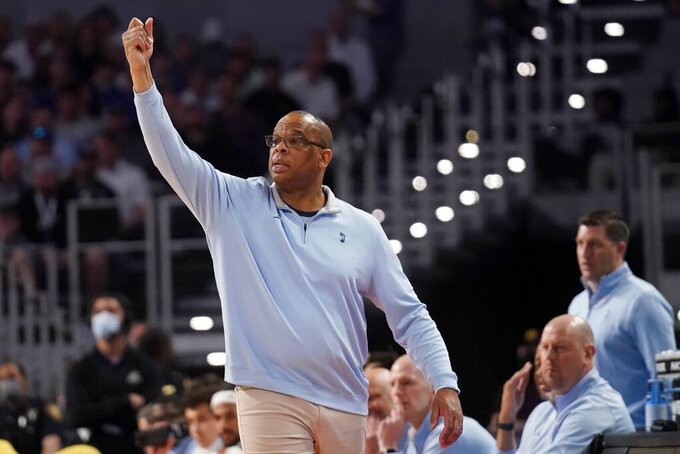 North Carolina head coach Hubert Davis instructs his team in the first half of a second-round game against Baylor in the NCAA college basketball tournament in Fort Worth, Texas, Saturday, March, 19, 2022. (AP Photo/Tony Gutierrez)

Michigan and Kentucky stood out in a study examining the men’s and women’s NCAA Tournament brackets based on graduation rates, academic success and diversity in the head coaching ranks.

Michigan was the overall No. 1 seed as the national champion for a third straight year in the men’s field according to the study released Wednesday by The Institute for Diversity and Ethics in Sport (TIDES) at Central Florida, as well as a No. 3 regional seed on the women’s side.

Kentucky held the overall No. 1 seed as the champion for the women’s field while owning a No. 3 regional seed on the men’s side.

This was the third year of the “Brackets for Brains and Diversity” study. It focuses on team Graduation Success Rate (GSR) and Academic Progress Rate (APR) scores, GSR gaps between white and Black players, and the racial or gender diversity of head coaches.

“It’s the time of the year where we barely talk about anything besides what’s happening on the hardwood understandably,” TIDES director and lead report author Richard Lapchick said. “So it’s to drop back into the conversation the academic performance of student athletes, the hiring practices of the individual schools.”

On the men’s side, the study’s Final Four featured Yale, North Carolina and Memphis alongside Michigan as 1-seeds, with Juwan Howard’s Wolverines and Hubert Davis’ Tar Heels reaching this week’s Sweet 16 on the court.

Yet several teams still playing in March performed well below their on-court seeding, including No. 1 seed Arizona (a No. 14 in the study), No. 3 seed Texas Tech (14), and two No. 4 seeds in UCLA and Arkansas earning 16-seeds in the study.

On the women’s side, the study’s Final Four featured Notre Dame, Georgia and Buffalo alongside Kyrz Elzy's Kentucky team as the 1-seeds. Of that group, only Niele Ivey’s Fighting Irish reached the Sweet 16.

The bracket report is one of numerous studies released annually by TIDES. including one last week on graduation rates for NCAA Tournament teams. The group also produces reports examining diversity-hiring practices for college athletics, and professional leagues such as the NFL, NBA, WNBA, Major League Baseball and Major League Soccer.