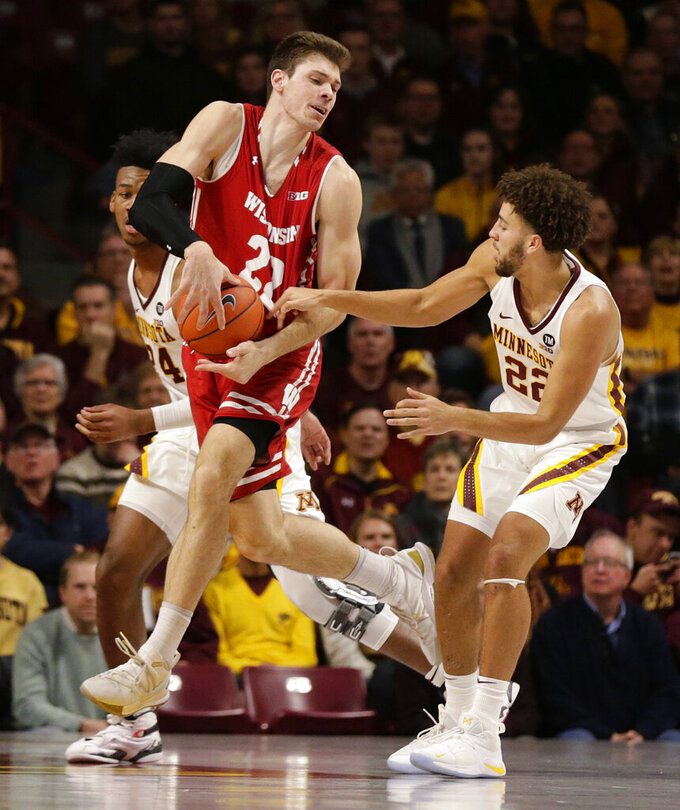 Wisconsin forward Ethan Happ (22) has the ball slapped away by Minnesota guard Gabe Kalscheur (22) during the first half of an NCAA college basketball game Wednesday, Feb. 6, 2019, in Minneapolis. (AP Photo/Andy Clayton-King) 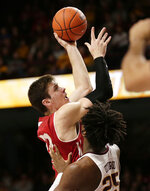 MINNEAPOLIS (AP) — After hugging his Wisconsin teammates to celebrate their sixth straight victory, Ethan Happ walked by Minnesota's student section on his way off the court with a wide smile, a sarcastic wave and a couple of blown kisses .

As the best player on the rival Badgers, Happ was a natural target of the typical jeering that was only heightened by a rocky start around the rim for the visiting team. The preseason Associated Press All-American wasn't fazed, though, and by the end of the night Wednesday there was the 6-foot-10 Happ with yet another double-double and yet another win over the Gophers .

"They've been very kind to me over the years," Happ said with a deadpan delivery in a postgame interview at Williams Arena, where he finished his career 3-0. "I just wanted to thank for their hospitality."

With the unflappable Happ leading the way, 19th-ranked Wisconsin (17-6, 9-3) has deftly recovered from a rough five-game stretch and crept into range of the regular season conference title. They're one game behind first-place Michigan, with a rematch against the Wolverines conveniently scheduled for Saturday afternoon at Crisler Center. The Badgers won the first meeting 64-54 at home on Jan. 14 to start their winning streak.

"It's hard to get wins in the Big Ten, especially on the road, so we're just happy that we came out of here," Happ said after the 56-51 victory for which he supplied 15 points, 13 rebounds and four assists in 33 minutes.

With freshman Daniel Oturu playing tight defense on Happ and the rest of the Gophers digging hard in the post and double-teaming at times, the Badgers missed 13 of their 18 attempts in the first half that were either layups or dunks. They made seven of eight after that.

"We did a better job of working angles, double pivoting, just being a little bit more patient," coach Greg Gard said. "I thought Ethan did a better job in the second half, too, of finding teammates when he did draw a crowd."

That ability to make the clean pass to the perimeter, where D'Mitrik Trice (44.7 percent) and Brad Davison (43.0 percent) are two of the top six 3-point shooters in the conference, makes Happ put Wisconsin's opponents in even more of a bind as if trying to defend his footwork in the post weren't already enough.

"I've never seen one player do more for one team. I've never seen it. When he's in the game he just occupies so much," Gophers coach Richard Pitino said. "He's about as unstoppable as it gets, so it's remarkable to me that people don't think he'll play in the NBA. I think he will."

In six games against the Gophers in Happ's career, the Badgers have held their border-state foe to fewer than 60 points in four of those matchups, with his length and instinct clearly playing a part.

After a 15-18 record last season stopped Wisconsin's NCAA Tournament streak cold at 19 consecutive appearances, the improvement by sophomores Trice, Davison and Nate Reuvers has been the biggest lift for the Badgers.

That wouldn't possible, though, without the presence of their senior leader his coach dubbed "the poster child for player development" in the program Gard has been trying to put his own stamp on after succeeding all-time Wisconsin wins leader Bo Ryan three years ago.

The fifth-leading scorer (18.3 per game) and third-leading rebounder (10.4 per game) in the Big Ten this season, Happ will leave the Badgers, wherever they finish two months from now, with a whole bunch of school records.

"He came in really kind of unheralded and not highly recruited and has really worked and put time into it," Gard said. "He's a gym rat."