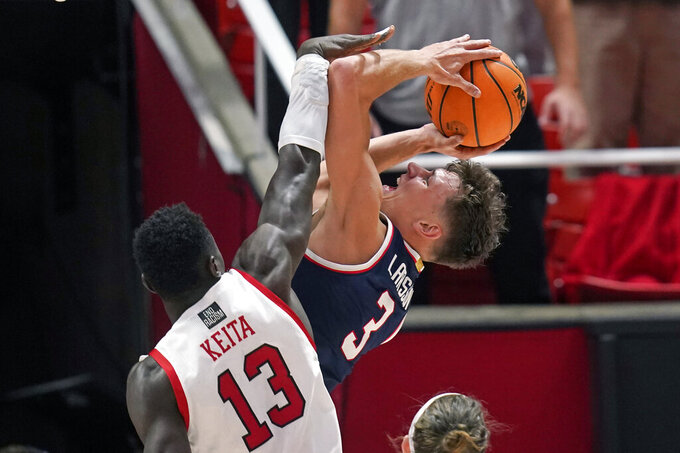 The Utes handed the No. 4 Wildcats their first loss of the season, 81-66, on Thursday night in the Pac-12 opener for both teams.

Utah locked down Arizona on the perimeter – limiting the Wildcats to 4-of-28 shooting from 3-point range. The Utes flustered the Wildcats into rushed shots and early turnovers, setting the tone for what became a comfortable victory.

Coming into Thursday’s game, Arizona had the nation’s top scoring offense after averaging 97.5 points through its first six contests.

“When you have Arizona on your chest, you expect the other team’s best shot and obviously their shot was lot better than ours tonight,” Arizona coach Tommy Lloyd said. “We didn’t match it, especially early in the game.”

Arizona struggled to generate a consistent offensive rhythm before halftime against Utah’s stifling defense. The Utes forced 11 turnovers in the first half that they converted into 15 points. When Arizona got looks at the basket, the Wildcats couldn’t knock down shots — making only 27% of their field goal attempts before halftime.

Ben Carlson and Worster each made back-to-back baskets to punctuate a 17-4 run that put the Utes ahead 39-20 late in the first half.

Arizona cut Utah’s lead to 52-46 in the second half on a 3-point play from Ballo. Madsen and Branden Carlson each scored a pair of baskets to help the Utes counter with an 18-4 run that pushed their lead back to 70-50.

The Wildcats didn’t seriously threaten Utah again and the Utes walked away with their first win over a top-10 opponent since beating then No. 6 Kentucky 69-66 on December 18th, 2019, in Las Vegas.

After dropping several close games against Pac-12 opponents a year ago, a dominating victory over Arizona offers evidence that the Utes have evolved into a team who can finish games this season.

Utah won just four games in league play during Smith’s first season and seven of their losses came by six points or fewer.

“It’s just effort and attitude and just a mindset that this game is not over, we got more in us,” Carlson said.

Arizona: Especially in the first half, the Wildcats didn’t resemble the high-flying team that won the Maui Invitational.

Utah: The Utes were impressive against the defending Pac-12 champions and showed they will be a factor in the league this season.