With heavy hearts, No. 16 UVA beats No. 5 Baylor in Vegas 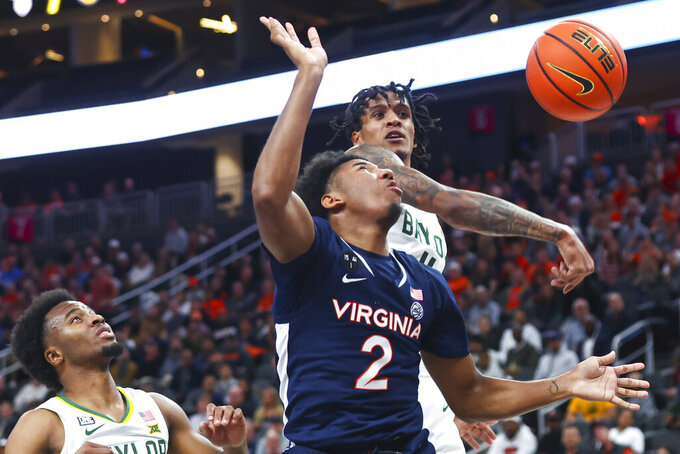 LAS VEGAS (AP) — Armaan Franklin scored a career-high 26 points, and No. 16 Virginia used a big second-half run to knock off No. 5 Baylor 86-79 on Friday night in the team's first game since three Cavaliers football players were killed in a campus shooting.

Virginia's players wore sweatshirts during warmups that honored the victims from Sunday's shooting, which led to the cancellation of the Cavaliers' scheduled home game a day later. A former Virginia football player has been charged with murder in the slayings of Lavel Davis Jr., Devin Chandler and D’Sean Perry.

The Cavaliers (3-0) will play No. 19 Illinois in Sunday's championship of the Continental Tire Main Event. Baylor (3-1) faces No. 8 UCLA in the consolation game.

Virginia went on a 21-2 run in the second half and twice went ahead by 22 points.

“That (big run) gave us a distance, and we certainly needed that the way they came back,” Virginia coach Tony Bennett said. “We couldn’t stop them at the end, which was the disappointing part.”

Franklin scored 10 points during that burst, and he finished 7 of 12 from the field, including 3 of 6 from 3-point range.

“I know I have teammates who are in position of getting me the ball, and the same for them,” Franklin said. “I know they can create for themselves. It was just taking open shots and being ready to shoot."

Keyonte George scored 20 points for Baylor and LJ Cryer had 19.

Trailing 62-40 midway through the second half, Baylor responded with an 8-0 run. The Bears used a full-court press and kept chipping away, twice getting as close as six points, but Virginia held on.

“We’ve got to do a better job of getting easy buckets,” Baylor coach Scott Drew said. “Normally, we get them off of our defensive transition, and we didn’t get any stops for 10 minutes.”

Baylor: The Bears are coming off back-to-back Big 12 Conference titles, the first team other than Kansas to accomplish that since Iowa State in 2000-01. With a balanced attack that includes four players averaging in double figures, the Bears have high hopes of advancing far into the NCAA Tournament.

Virginia: All five starters are back from last season's team, which made the NIT quarterfinals. The Cavaliers are counting on the experience of a senior-led team to make an NCAA Tournament run. Before last year, Bennett's team had played in seven consecutive NCAA tourneys.

The Cavaliers will face another explosive offense in Illinois, which rallied in the second half to beat UCLA. The Bears and Bruins will meet in a consolation game between teams ranked in the top 10.