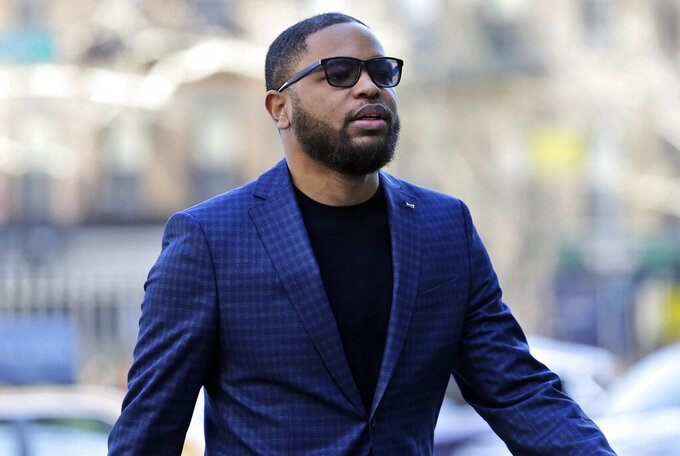 FILE - In this March 5, 2019, file photo, Christian Dawkins arrives at federal court in New York. Dawkins denied on Wednesday allegations that he paid a $2,500 bribe to then-University of South Carolina assistant Lamont Evans. He told a federal jury that the money was meant to pay expenses for the family of South Carolina basketball player P.J. Dozier, a top NBA prospect at the time. (AP Photo/Seth Wenig, File) 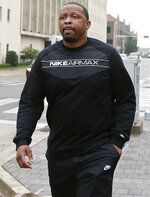 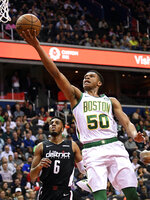 NEW YORK (AP) — A former aspiring business manager for NBA players took the witness stand at a college basketball bribery trial Wednesday to deny charges that he paid off coaches at major programs to get their help in landing clients with potential for lucrative pro contracts.

"I never paid a coach with the intent of bribing or influencing anyone," Christian Dawkins told a jury in federal court in Manhattan.

Dawkins, 26, described resisting pressure from FBI agents posing as investors in his fledging sports management company to make payouts to coaches at schools including the University of Arizona, University of Southern California, Creighton and Texas Christian University. At one point during the testimony, the defense played a secret recording where Dawkins complains to one of the undercovers that they shouldn't "be Santa Claus and just give people money," saying the funds would be better spent at strip clubs.

Earlier Wednesday, the government ended its case by playing other wiretap recordings of Dawkins. On one 2017 call, then-Arizona assistant coach Emanuel "Book" Richardson tells Dawkins that head coach Sean Miller was involved in a deal to pay eventual No. 1 NBA draft pick Deandre Ayton $10,000 a month to play for the Wildcats.

There was no immediate comment Wednesday from officials at Arizona. Miller, who remains the coach at Arizona, has repeatedly declined to discuss the investigation.

Dawkins was testifying in his own defense at a federal trial where he and his co-defendant, amateur coach Merl Code, have pleaded not guilty to charges accusing them of conspiring to bribe coaches in 2017 while trying to get Dawkins' company off the ground.

Asked specifically about an alleged $2,500 bribe made on behalf of an NBA agent to then-University of South Carolina assistant coach Lamont Evans, Dawkins told the jury that the money instead was meant to cover the expenses of the family of basketball player P.J. Dozier, a top recruit at the time.

Dawkins insisted it wouldn't make sense to bribe coaches because they carry little influence over players' decisions on who to hire as agents and business managers.

"From a business perspective, it doesn't make sense," he said. "Lamont Evans couldn't do anything for us so there was no reason to pay him."

Dawkins freely admitted that while working for the agent prior to launching his own firm, he regularly doled out cash to family members of standout prospects — "fathers, mothers, sisters, brothers" acting as player "handlers" — in violation of NCAA rules. He said in the "ferocious" competition to sign top talent, it was a price of doing business.

"I have nothing to hide from that standpoint," he said. "Everybody was paying players."

Dawkins was to return to the witness stand Thursday for cross-examination.

Evans and Richardson have pleaded guilty to bribery conspiracy charges and are awaiting sentencing.