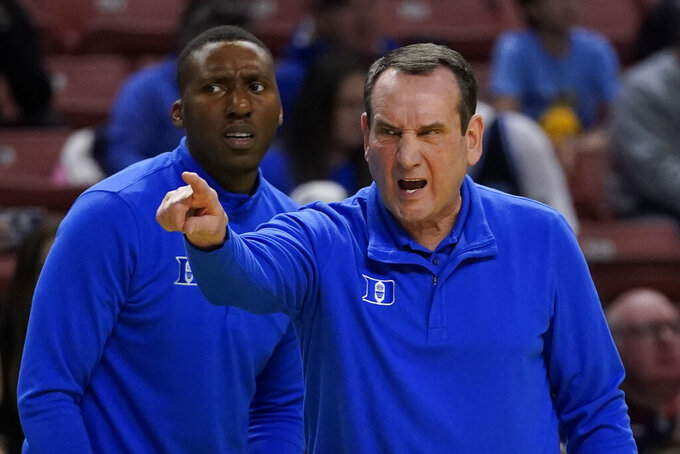 Duke head coach Mike Krzyzewski yells during the first half of a college basketball game against the Cal State Fullerton in the first round of the NCAA tournament on Friday, March 18, 2022, in Greenville, S.C. (AP Photo/Chris Carlson)

Mike Krzyzewski won his first NCAA Tournament game as Duke's coach in 1985 and his 98th on Friday night.

He was an up-and-comer with a hard-to-spell last name back then, and a contender for the title of college basketball G.O.A.T. now — no matter how much longer his final season runs. You'll miss him when he's gone. But if Duke's comfortable 78-61 first-round win over Cal State-Fullerton is any indication, that won't be anytime soon.

The second-seeded Blue Devils came out red-hot and played defense the way Krzyzewski has been begging them to for weeks. They led by 10 at halftime, padded the cushion to 20 in the second half and cruised home with all five starters in double figures.

And if it looks like the rest of this tournament sets up nicely for Coach K after a rocky close to the regular season, well, you're not alone, either.

Day 2 of the tournament featured three upsets, one fewer than Thursday, and nothing on the magnitude of tiny, 15th-seeded St. Peter's toppling mighty Kentucky. Only four games were even close, with Michigan State hanging on by its fingernails to beat Davidson 74-73, and matching Spartans coach Tom Izzo against Krzyzewski, his longtime Hall of Fame nemesis and pal, for the sixth time in the tournament in Sunday's second round.

“It's like the Hatfields and the McCoys,” Izzo said. “You got to war for a day, but the respect and the admiration will be there for a lifetime.”

Battles between dinosaurs with resumes as good as these two — Krzyzewski is 75; Izzo, 67 — will become increasingly rare. None of today's younger coaches who are that good will stay at the same school for that long. Texas coach Chris Beard, a rising star in the profession, improved to 5-0 in first-round games as his No. 6 Longhorns posted a workmanlike 81-73 win over a tough 11th-seeded Virginia Tech squad.

That sounds impressive, until you remember that Coach K has turned that trick 33 times and gone on to the Final Four a dozen times and won it all after five of those.

Friday's upset-that-wasn't resembled a wrestling match, with seventh-seeded Ohio State subduing No. 10 Loyola of Chicago, 54-41. The Ramblers, everybody's favorite underdog and a reliable bracket-buster in recent years, were actually listed as a slight favorite by by FanDuel Sportsbook. But things went pretty much downhill right after Sister Jean, Loyola’s 102-year-old chaplain, led the Ramblers in a pregame prayer.

“We knew we were in for a rock fight, and that’s very much what it was,” Ohio State coach Chris Holtmann said afterward.

Keeping with the Goliath-beats-David theme, Purdue gained back a measure of respect for the Big Ten by crushing 14th-seeded Yale 78-56. The eighth-seeded Boilermakers relied on Jaden Ivy's speed outside and owned the paint by planting 7-foot-4 Zach Edey under the basket, where he scored 16 points and grabbed nine rebounds in just 19 minutes of work.

“Have you seen anybody in your life as big as he is ?” Jones said. “Other than Yao Ming, I’ve seen nobody as big as he is. He is the second-largest man I’ve ever seen.”

As big men go, Jabari Smith was even more impressive, scoring 20 points, adding 14 rebounds and a thunderous dunk that produced the first sure-fire poster of the tourney as second-seeded Auburn pulled away from Jacksonville State, 80-61, en route to the Tigers' 10th-straight tourney-opening win.

The Tigers looked like serious contenders from the get-go, and with the game in hand, Smith, a 6-10 power forward and likely NBA lottery pick, signaled his bad intentions beginning at the arc. Picking up speed, he then headed straight for the rim with the Gamecocks’ 6-10 forward Brandon Huffman in his way. Smith went up and over, then threw the ball down with enough force to suck some of the air out of the arena.

“He never did that in practice," laughed teammate K.D. Johnson. "That was the first time he showed me he can get that high, so that was crazy.”

The fact that Notre Dame's players had any legs left at all qualifies as the biggest surprise so far. The 11th-seeded Irish needed double-overtime to shake off Rutgers in a play-in game, then flew cross country and beat No. 6 Alabama 78-64 in their second game in less than 48 hours.

Cormac Ryan scored a career-high 29 points, including seven 3-pointers and figured frequent-flyer points were only the second-best benefit the Irish picked up on the whirlwind tour.

"I think the quick trip actually helped us because we were still hungry. It was like we just got off the court; put us back on, we’re ready,” he said.