No. 2 Baylor on verge of title in incomplete Big 12 season 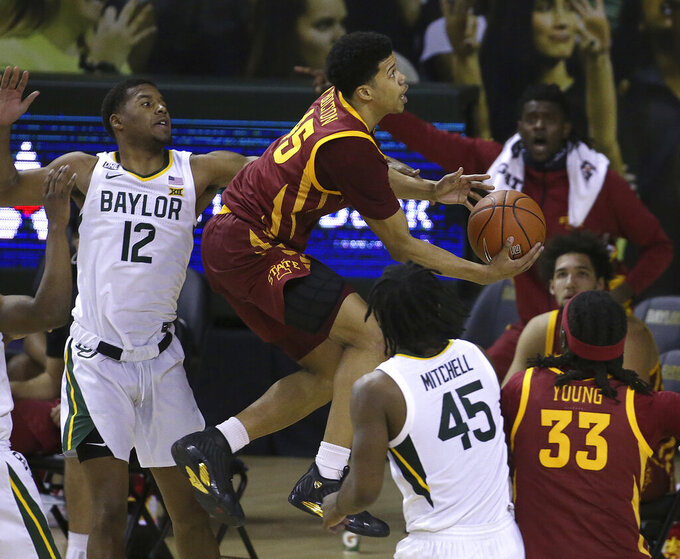 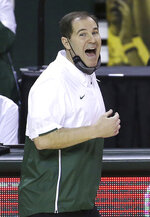 No. 2 Baylor will play fewer Big 12 games than anyone else, and can still win the conference title for the first time.

Even though the Big 12 started playing conference games in mid-December — and left an open week for makeup games before its tournament — only four of the 10 teams will have the opportunity to complete their full, 18-game round-robin conference schedules.

The undefeated Bears can max out at 14 Big 12 games. No. 7 Oklahoma, No. 10 West Virginia, and No. 14 Texas — none of them getting to play Baylor a second time — and No. 18 Texas Tech will get up up to 17 conference games. Oklahoma State, another likely NCAA Tournament team, could play all 18.

“We always tell our players control what you can control. And the same thing with us,” Baylor coach Scott Drew said. “We’re just happy to play games."

The Bears (18-0, 10-0 Big 12) had six consecutive games postponed over a three-week span because of COVID-19 issues in their program before returning with a comeback victory over Iowa State on Tuesday night. They can clinch the Big 12 title with a win at No. 17 Kansas (17-8, 11-6), the only team set to play its 18th league game Saturday, or by winning any of their three scheduled makeup games next week.

Because of the uneven number of games played, the regular-season league champion will be determined by winning percentage. That leaves West Virginia (16-6, 9-4) as the only team that could keep Baylor from winning the title. But the Mountaineers would have to win all their remaining four games, all at home, and the Bears would have to lose all theirs.

“I would feel different about it, if you kind of feel like they were able to pick and choose who they were going to play, and not play. But obviously, that didn’t happen,” West Virginia coach Bob Huggins said Friday. “So if they have the highest percentage, they should be the the league champion.”

That winning percentage has to be based on a minimum of 13 conference games. If for some reason the Bears don't reach that mark, any number of unplayed games to get there would be considered a loss but only for determining the standings, and not changing their actual league and overall record. If Baylor didn't play another game, that would translate to 10-3 and a .769 winning percentage that no team could match.

The Big 12 filled next week with 12 makeup games before the conference tournament March 10-13 in Kansas City.

Baylor is set to play Tuesday at West Virginia, after having its home game against the Mountaineers postponed twice before getting scrubbed by the Big 12 with the late schedule shuffle. The Bears then host Oklahoma State and Texas Tech. West Virginia plays Kansas State on Saturday, and also has games against TCU and Oklahoma State.

If all of the makeup games are played, the Big 12 will get in 85 of its 90 scheduled conference games, with only Baylor and TCU missing multiple games. Huggins said it would have been hard to do better than that.

“We’ve all had interruptions," K-State coach Bruce Weber said. "It's just not been normal. It’s been hard on everybody. It hasn’t been a perfect season. There’s no doubt about that.”

Baylor set a Big 12 record with its overall 23-game winning streak last season, but then lost three of its last five regular-season games before the conference and NCAA tournaments after both of those were canceled because of the coronavirus pandemic.

Guard MaCio Teague said that because of the way last season ended, the Bears aren't taking anything for granted now.

“Missing out on a few games just isn’t ideal for us," Teague said. “We want to play as many games as we can.”