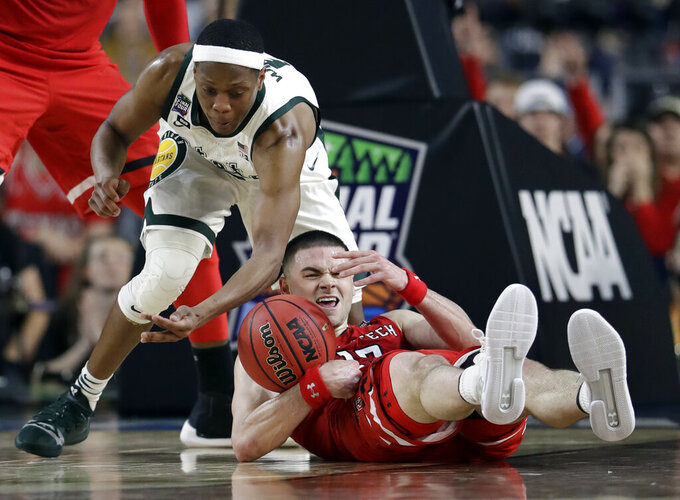 Texas Tech's Matt Mooney (13) battles for a loose ball against Michigan State's Cassius Winston (5) during the second half in the semifinals of the Final Four NCAA college basketball tournament, Saturday, April 6, 2019, in Minneapolis. (AP Photo/Jeff Roberson)

The physical play. The toughness. The attention to defense and rebounding. Everything Tom Izzo gets his players to do, that's what Beard expects from his.

Facing Michigan State with a spot in the national championship on the line, Beard and his roughneck Red Raiders out-Izzo'd Izzo.

Texas Tech took one of the nation's toughest teams head and won the battle of body blows, knocking off Michigan State 61-51 Saturday night to earn a spot in Monday's title game against Virginia.

"Very seldom in my career have we kind of got beat up," Izzo said. "Tonight was one of those nights."

The Red Raiders (31-6) have made a rapid rise to becoming the nation's most efficient defense, earning a trip to their first Elite Eight in just Beard's second season.

Texas Tech clamped down on a Big 12 regular-season title this year and smothered one opponent after the next in the NCAA Tournament, holding teams to an average of 57 points.

The Red Raiders knew it would be a rough road against Izzo and his Spartans.

Michigan State (32-7) epitomizes Big Ten brutality, bumping and bashing opponents into submission to reach the Final Four for the eighth time under its fiery coach.

Texas Tech took a similar approach, packing the lane to force teams to the perimeter while reaching its first Final Four.

The second national semifinal was expected to be the gritty side of the Final Four and certainly lived up to the billing.

The defensive dictators turned every possession into a fight for freedom in a body-blow-trading first half.

Both teams shot 30 percent and neither cracked 25 points.

"Their defense is really, really good, force you into tough situations to make plays," said Michigan State points guard Cassius Winston, who had 16 points on 4-of-16 shooting.

An offensive adjustment allowed the Red Raiders to get a little breathing room. They started finding seams in Michigan State's defense on drives to the basket, opening up the perimeter.

Izzo has a few defensive tricks up his suit sleeve, too, and the Spartans made their adjustment, cutting off the driving lanes and getting out to Mooney.

With Texas Tech still making offensive life miserable, the Spartans rallied by getting to the free throw line, using a 13-2 run to cut the lead to 52-51.

The Red Raiders stiff-armed them right out of the Final Four.

The Red Raiders held the Spartans to a season-low in points, 32 percent shooting and 7 of 24 from 3 to earn their first spot in the national title game.

"We threw a lot of punches tonight," Beard said. "We tried a lot of things on defense and most of them worked."

Coming Monday: a defensive showdown for the ages.

Virginia and its pack-line defense against the ravenous Red Raiders.