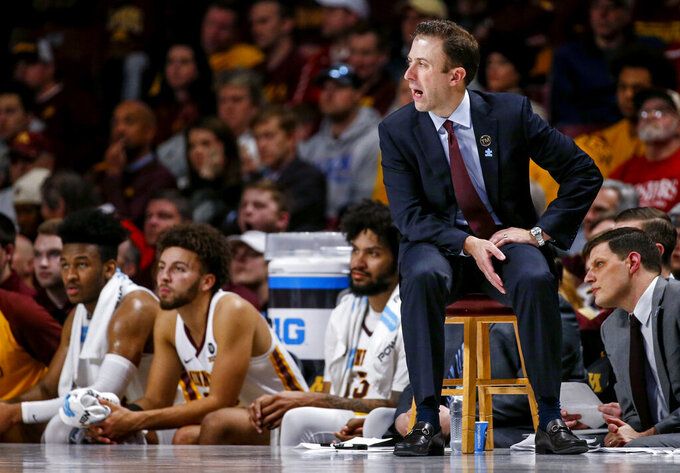 FILE - In this Feb. 16, 2019, file photo, Minnesota coach Rick Pitino watches the team play Indiana in an NCAA college basketball game in Minneapolis. Pitino has agreed to a two-year contract extension, coming off his first NCAA Tournament win in six seasons with the Gophers. The university announced the deal, subject to approval by the board of regents, on Sunday, April 7. Pitino will now be under contract until 2024. (AP Photo/Bruce Kluckhohn, File)

MINNEAPOLIS (AP) — Minnesota coach Richard Pitino has agreed to a two-year contract extension through the 2023-24 season, following his first NCAA Tournament win in six years with the Gophers.

The university announced the deal, which is subject to approval by the board of regents, on Sunday. Pitino's annual salary was increased to $2 million, up from about $1.7 million this season. Giving major-college coaches at least five years of contract runway is a common practice to help sell stability to recruits.

"I am excited for Coach Pitino to continue to lead our men's basketball program," said athletic director Mark Coyle, who came to Minnesota after Pitino's third season. "I look forward to him advancing the program further in the upcoming years."

This year, the Gophers were a No. 10 seed in the East Region, beating Louisville in the first round before losing to Michigan State two days later. Two March victories over Purdue, which shared the regular-season conference title with Michigan State and fell one game short of the Final Four, solidified an at-large bid in the tournament after a rough stretch in February.

"My family and I have loved living in the Twin Cities the last six years. We have met so many wonderful, supportive people. It's an honor to be able to continue to lead this Gopher basketball program. I enjoy working with my athletics director, Mark Coyle, every day," Pitino said in a statement that thanked Coyle and university President Eric Kaler for their support. "I look forward to continuing to move this special program forward."

The win over Louisville was just the second in the NCAA Tournament by Minnesota since an Elite Eight victory over UCLA in 1997 that was later stripped by the NCAA for an academic fraud scandal. The Gophers won a first-round game in 2013 under coach Tubby Smith, the predecessor to Pitino.