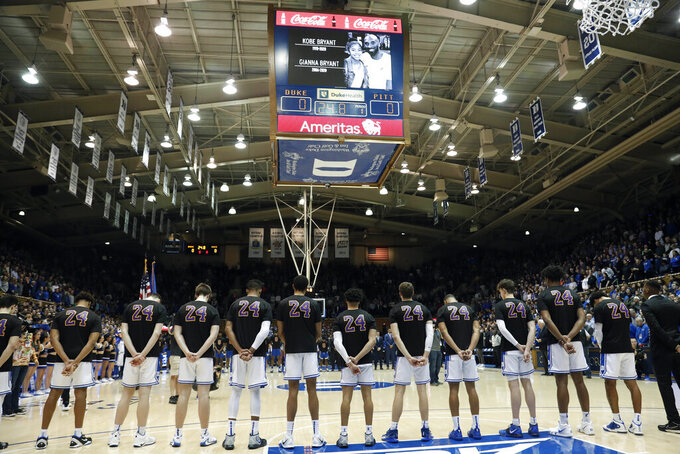 Duke players wear a Number 24 jersey during a moment of silence in memory of Kobe Bryant and his daughter Gianna Bryant prior to an NCAA college basketball game against Pittsburgh in Durham, N.C., Tuesday, Jan. 28, 2020. (AP Photo/Gerry Broome)

DURHAM, N.C. (AP) — It was a topsy-turvy night for Duke coach Mike Krzyzewski.

Freshman center Vernon Carey Jr. had 26 points and 13 rebounds in the ninth-ranked Blue Devils' 79-67 win over Pittsburgh on Tuesday night, a game that included tributes to Kobe Bryant and an outburst by Coach K at his own Cameron Crazies.

Krzyzewski admonished the Duke students at halftime after he objected to their playful chant toward Pittsburgh coach Jeff Capel, a former Blue Devil player and assistant coach. After the game, Krzyzewski apologized to the students because he misunderstood them, while still wishing aloud they had found something else to yell.

Before the game, Krzyzewski stood stoically as Bryant, who along with his daughter was one of nine people who died in a helicopter crash Sunday in California, was honored with 24.8 seconds of silence in honor of the two jersey numbers he wore for the Los Angeles Lakers.

Late in the first half, Duke students began chanting “Come sit with me” to Capel. At halftime, as the players left the floor, Krzyzewski walked over to the student section and scolded the fans, saying of Capel: “He’s one of us.”

Krzyzewski apologized later, but said he’d prefer they not chant at the coach on the opposite bench during a hard-fought game.

“It was a mistake on my part, but I’d rather make a mistake in protection of my guy,” Krzyzewski said. “I went at the end of the half and said, ‘Look, he’s our guy.’ And that’s said. So I apologize. Let’s think of a different cheer.”

Capel said he didn’t know what the students were saying. He said guard Au’Diese Toney, who led all scorers with 27 points, played his best game at Pitt. Capel was pleased with the way the Panthers (13-8, 4-6 Atlantic Coast Conference) competed and handled Duke’s pressure defense.

After trailing 60-42 early in the second half, Pittsburgh rallied to cut the deficit to three points.

“I’m proud of that, but it’s not good enough,” Capel said. “I want our program to get to a point where we’re not satisfied with being close.”

Duke (17-3, 7-2) bounced back after the Panthers made it close, scoring 11 of the final 13 points. Tre Jones scored 14 points and added eight assists with no turnovers, and Jordan Goldwire contributed 13 points, making all of his career-high three 3-pointers in the first half.

The Blue Devils made 7 of 14 3-point attempts in the opening half, and then made enough plays at the end.

Krzyzewski’s day concluded with emotional words about Bryant, who was one of the leaders of the U.S. Olympic teams that Krzyzewski coached to gold medals in 2008 and 2012. Krzyzewski reminisced about how Bryant would call his granddaughters “Princess” and kiss their hands.

“The last couple of days have been really emotional,” Krzyzewski said. “Look, Kobe was one of my players. I coached him on three teams. He was my leader. We had special moments, private and public. He was amazing with my grandkids.

“And for the other people involved, too, are you kidding me? Horrific. So very tragic.”

Pittsburgh: The Panthers are scrappy and athletic and present challenges for opponents with their defense. Pitt can take pride in the way it competed in Capel’s homecoming.

Duke: The Blue Devils’ accuracy from 3-point range in the first half was the most welcome development of the night. An intense man-to-man defense and the low-post scoring skills of Carey should give Duke a chance to win just about every game. If the rest of the cast can score from the perimeter, the Blue Devils can take their game to another level.

Before tipoff, players for Duke and Pitt honored Bryant when they warmed up in T-shirts with purple and gold numerals 8 on the front and 24 on the back. Bryant and Duke alumnus and former ACC Commissioner Gene Corrigan, who died Friday, were honored before the game. ... Toney and Justin Champagnie, who scored 13 points, both played the full 40 minutes for Pitt. ... Carey played a season-high 36 minutes, and Goldwire played 35. ... Six players made 3-pointers for Duke.