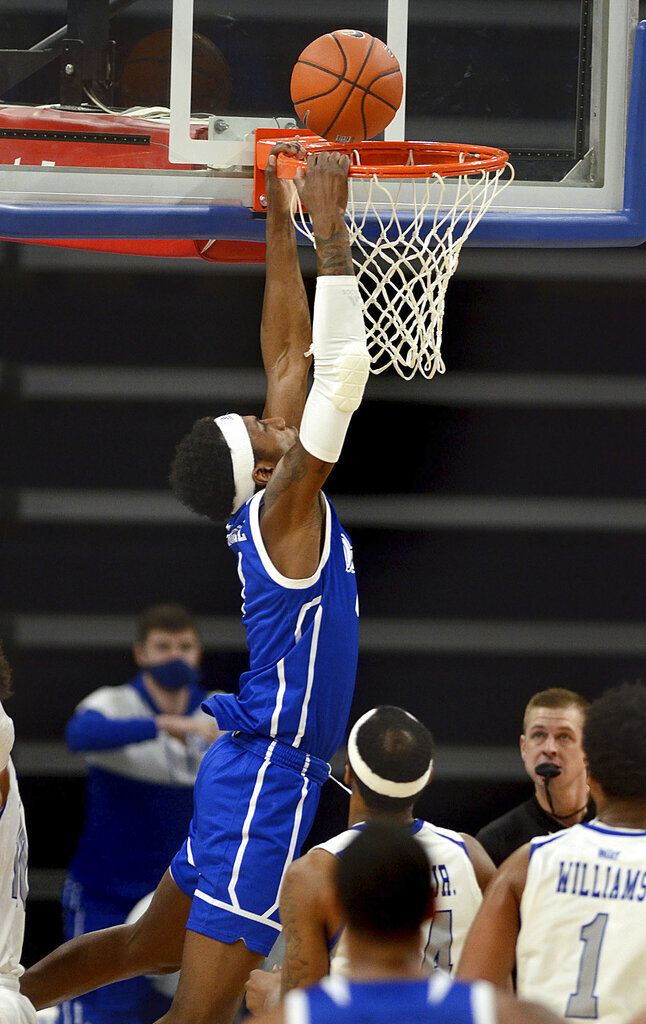 FILE - Drake's Shanquan Hemphill, top, drives to the basket against Indiana State during an NCAA college basketball game in Terre Haute, Ind., in this Sunday, Dec. 27, 2020, file photo. Drake is 15-0 for its best start in program history. Hemphill is Drake's leading scorer at 14.7 points per game.(Joseph C. Garza/The Tribune-Star via AP, File)

Reasonable people can disagree on who's hotter right now.

The Bulldogs from Des Moines, Iowa, are 15-0 and among the last unbeaten teams in the country. The megastar musician from Canada is expected to release a highly anticipated album any day.

Their paths crossed on social media this week when the rapper's fans divined a Tweet about the basketball team's point spread against against Missouri State as a sign of the album's imminent drop.

“You see Drake trending, and people think Drake the rapper is about to make music,” guard Roman Penn said. “I thought that was pretty cool."

That's not all that's cool for the Missouri Valley Conference school. The Bulldogs on Friday were No. 9 in the NET rankings, which is used to determine NCAA Tournament seedings, and moving closer to cracking The Associated Press Top 25 for the first time in 13 years.

“You go on social media and see all the big teams that are usually right there every year, and you see Drake and you’re like, ‘Wow, I’m on that team,’ ” Penn said. “It’s something you’re going to remember the rest of your life. That’s how I look at it. We’re enjoying it, having fun with it. It’s really good for the city to get the recognition, the school."

Drake's start is the best in program history, and the win streak is its longest since Keno Davis' 2007-08 team won 21 straight. The Bulldogs join Gonzaga, Winthrop and Baylor as the only unbeatens among teams that have played more than four games.

“We're all taking it in stride,” third-year coach Darian DeVries said. “”What (attention) comes our way is great and the guys are enjoying it and they’re using it the right way. They’re using it to motivate them, to want to continue it to build."

Critics point out that the Bulldogs played a soft nonconference schedule and that they've beaten only one top-100 team in the NET. Two games against the No. 25 team, Loyola-Chicago, were called off as part of Drake's five-game, 22-day COVID-19 shutdown that ended this week.

The Bulldogs make no apologies. Twelve of their 15 wins have been by double digits, and their average margin of victory of 21.6 points ranks fourth nationally.

The conductor is the 45-year-old DeVries, a longtime Creighton assistant who tried for the Drake job in 2013 and 2017 and was turned down both times. He was hired in 2018 after Niko Medved bolted for Colorado State after one season.

DeVries grew up 90 minutes northeast of Des Moines in Aplington and played at Northern Iowa. Dana Altman hired him for a graduate manager position at Creighton in 1998, and he was retained when Greg McDermott took over for Altman in 2010.

Drake's roster was depleted when DeVries arrived, but he went 24-10 and was named 2018 MVC coach of the year. The Bulldogs were 20-14 last season, and now he has them on track to make the NCAA Tournament for the first time since 2008.

“I’ve always felt like Darian is a terrific basketball coach," McDermott said, “and for him to do it as quickly as he’s done it, it’s extremely rare in our business. He connects with young people and his teams play with a lot of energy and a lot of effort."

ShanQuan Hemphill, a transfer from Green Bay, is scoring a team-leading 14.7 points per game. Penn, in his third year at Drake after transferring from Siena, is averaging 13 points and 5.2 assists. The 6-foot-10, 275-pound Darnell Brodie is in his first season since transferring from Seton Hall and averaging 7.5 rebounds.

The average age of his five starters is 23.3 and the team average is 21.5, a statistic not to be overlooked in a season played during a pandemic.

“There was a lack of practice coming off a three-week layoff, and we have veteran guys that can make those adjustments pretty quickly,” DeVries said. “You don’t have to retrain them. They didn’t forget everything they’ve learned."

Penn said he entered the season believing his team had a chance to be better than seventh place, which is where the Bulldogs were picked in the 10-team Valley.

“I knew we could accomplish a lot of things," he said. “I can’t say honestly we were going to go 15-0. I can’t say I saw it coming. We’re enjoying it. Hopefully we keep it rolling."