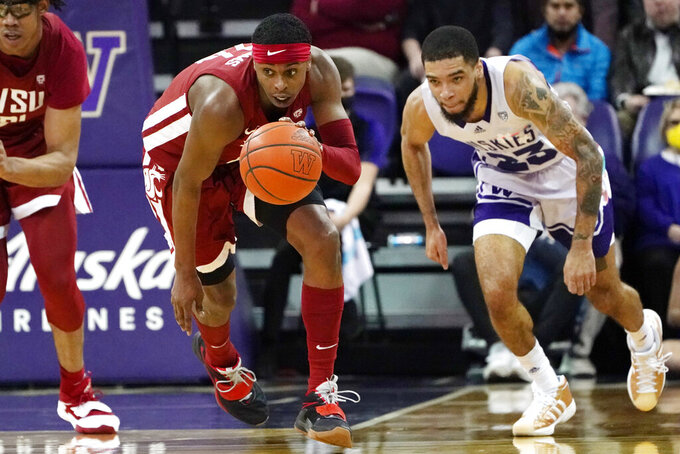 SEATTLE (AP) — For one full game earlier this week and the first half on Saturday, Washington State shut down Pac-12 scoring leader Terrell Brown Jr. as well as anyone has this season.

All Brown needed was 20 minutes to show the Cougars why he's the best scorer in the conference.

“Sometimes you just have to relax a little bit,” Brown said after scoring 21 of his 25 points in the second half to lead Washington to a 78-70 win over Washington State.

Brown erupted after an awful first half shooting performance to keep alive the Huskies (14-13, 9-8 Pac-12) slim chances of a top-four finish in the final Pac-12 regular season standings. Brown missed eight of nine shots in the first half, but was superb over the final 20 minutes.

Brown played every minute of the second half and made 7 of 12 shots and was 7 of 9 at the free-throw line. It was his 16th game this season with at least 20 points.

“I know my teammates have my back. Coaching staff believes in me. Teammates believe in me. Just relax and breathe in and know who you are as a player," Brown said.

Emmitt Matthews Jr., who missed Washington’s loss at Washington State earlier this week with a concussion, returned to add 15 points including a key dunk with 30 seconds left as Washington State tried to force a turnover. Jamal Bey added 13.

The rivals split their home games this week with the Cougars winning by the same score on their home floor on Wednesday.

“They realized that they didn’t do what we needed to do in the first half but galvanized together, we’re really ready, and we played I thought really, really tough in the second half,” Washington coach Mike Hopkins said.

Michael Flowers scored a season-high 30 to lead Washington State (15-13, 8-9) but was shut down in the second half. Flowers made five 3-pointers and had 20 points in the first half. He was stymied for much of the second half and didn’t get much scoring help.

Flowers was 7 of 12 on 3-pointers, while the rest of the Cougars combined to go 2 for 15. Mouhamed Gueye added 10 points for the Cougars. Efe Abogidi, who had 21 points on Wednesday, was held to four points and took just four shots in 19 minutes. Noah Williams, who had big games in the past against Washington, struggled badly shooting 2 of 13 and finishing with seven points.

“We kind of wilted a little bit. They took us out of our stuff and it’s tough on the road in that situation. Hopefully we can get better,” Washington State coach Kyle Smith said.

Washington started the second half on an 18-6 run, quickly erasing the six-point halftime deficit. Brown continued to find open looks difficult, but some of those difficult shots started falling. His three-point play gave Washington a 37-36 lead, its first since it was 5-3, and consecutive layups gave the Huskies a 57-51 lead with 8:23 remaining.

The Huskies lead grew to 66-57 after Bey’s two free throws with 2:41 left, but 3s from Williams, Flowers and Tyrell Roberts kept the Cougars close. Washington hit its free throws in the closing minutes, going 8 of 9 at the line to help hold off the Cougars rally.

“We guarded (Brown) as well as anybody for three halves, and he’s good player,” Smith said. “He’s going to have that and you got to be ready for it and we just didn’t whether his effort.”

Washington State: Any slim chance the Cougars had of an at-large bid for the NCAA tournament is likely done. The Cougars had excellent computer numbers, but the loss to the Huskies likely means the Pac-12 tournament is their only route to the NCAAs.

Washington: The Huskies snapped a four-game losing streak overall, but their path doesn’t get easier with home games against No. 12 UCLA and Oregon on the horizon. ... Daejon Davis returned from a shoulder injury and finished with nine points, seven rebounds and five assists.

Washington: Hosts No. 12 UCLA on Monday.