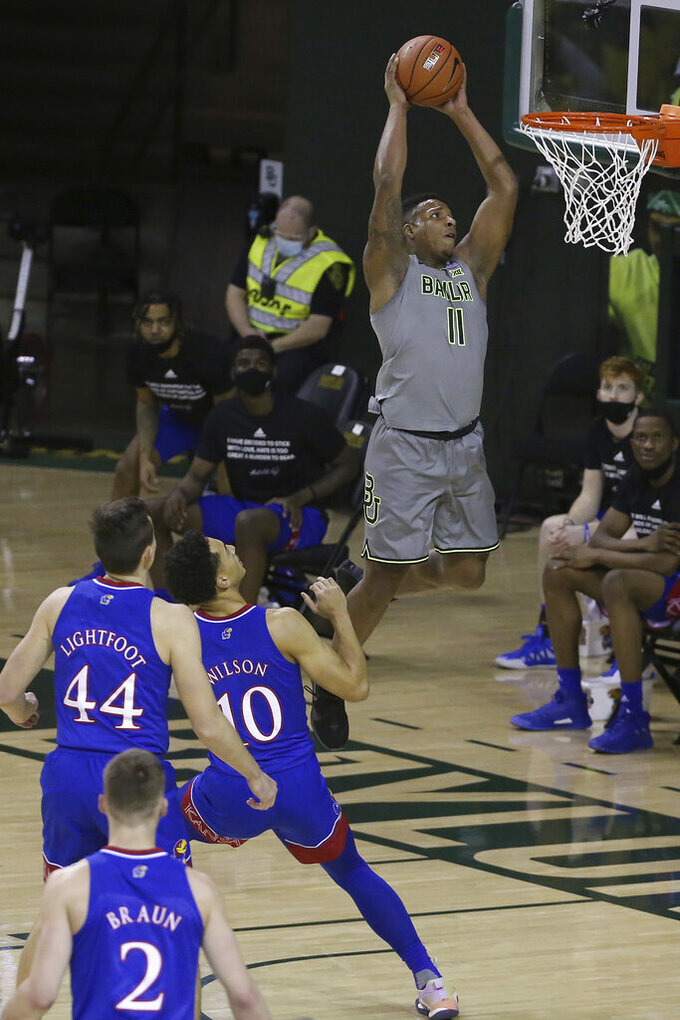 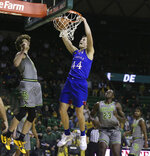 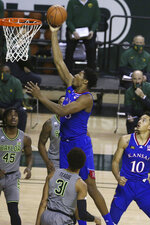 WACO, Texas (AP) — Jared Butler hit a 3-pointer on the first shot of the game and No. 2 Baylor jumped out to a big lead. The standout guard kept scoring points — and making plays when No. 9 Kansas tried to get close late.

Butler had a season-high 30 points and eight assists as the Bears remained undefeated with a 77-69 victory Monday night over No. 9 Kansas, which has lost consecutive Big 12 games for the first time in nearly eight years.

“It’s a team that wins the game. Me trying to do it all by myself, it’s never worked out that way,” Butler said, deferring some of the credit. “To win the Big 12, we’re going to need all 15 guys, we need everybody, we need the staff. I just make sure we play a team game, and I think we’re unbeatable when we play that way.”

Butler and these Bears (13-0, 6-0 Big 12) led throughout in a matchup of this season's preseason league favorite and the team that has won or shared 15 of the last 16 regular-season titles. The first of Butler's seven 3-pointers was part of their opening 11-2 spurt, and they led by as many as 16 in the first half.

“They were real focused, like we’ve been for every game,” Baylor coach Scott Drew said.

Kansas (10-4, 4-3) played for the first time since a 75-70 loss last Tuesday at Oklahoma State before the Jayhawks' scheduled game Saturday was postponed because of COVID-19 issues in Iowa State’s program.

The Jayhawks were within 65-60 with 3:18 left after Jalen Wilson drove the baseline for a slam that capped an 8-0 run. Butler then hit a 3 at the other end, and Kansas never got closer.

When Kansas had closed to 56-51 midway though the second half after a turnover by Butler led to a dunk by Ochai Agbaji, Butler responded with a pass to Mark Vital for a dunk. Butler then followed a turnover by Agbaji with a 3-pointer.

“I’m not leaving out of here mad. I’m leaving out here disappointed, without question," Self said. “Certainly they were better than us tonight.”

MaCio Teague added 13 points and Davion Mitchell 10 for the Bears. Vital had 10 rebounds, along with an impressive block on what would have been a breakaway dunk for Kansas.

Christian Braun had 14 of his 17 points for Kansas in the first half, while Agbaji had 13 of his 16 points after halftime. Marcus Garrett had nine points and eight assists, but also had five turnovers.

Butler had nine points in the game's first five minutes. That came two days after he was scoreless until scoring seven points in the final seven minutes of a 68-60 win at Texas Tech that was Baylor's first game this season decided by fewer than 10 points.

Baylor was up 37-21 following another 3 by Butler that prompted Self to call his third timeout. That came only seconds before what would have been the under-four media stoppage, but he didn't wait after the 3 that was set up when Matthew Mayer stole a bad pass by Garrett.

Kansas also played No. 1 Gonzaga this season, losing to the Bulldogs 102-90 in the season opener.

“Well, I would be shocked if there’s a third (team) that fits into that category,” Self said. “The games were actually pretty similar. ... We came back and tied Gonzaga, didn’t quite get close enough to do that today. I think they’re both terrific.”

Kansas: The Jayhawks are 98-14 following a loss under Self. Their last eight losses overall have been to Top 25 teams. ... If not for Braun's effort in the first half, when he made all four of his 3-pointers, the Jayhawks could have been in a much bigger hole. There was a stretch of just over four minutes when he outscored Baylor 11-10 on his own.

“We would have been buried if it wasn’t for CB making two or three 3s, but after that we settled in and did some good things,” Self said.

Kansas is at Oklahoma on Saturday, only two weeks after holding on at home for a 63-59 win over the Sooners.

By Ken Maguire an hour ago
By Gary B. Graves 4 hrs ago
By Hank Kurz Jr. 4 hrs ago
By John Kekis 5 hrs ago
5 hrs ago