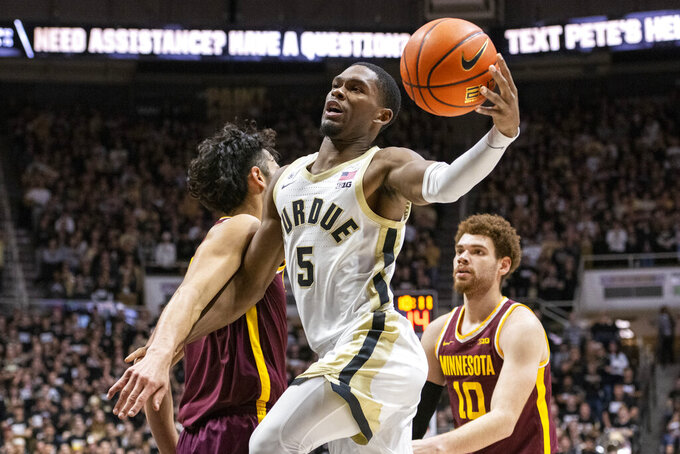 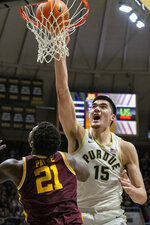 “I don’t think there’s a team in the country that has an answer,” Johnson said.

The 7-foot-4 Edey set career highs with 31 points and 22 rebounds, powering No. 5 Purdue past Minnesota 89-70 Sunday in the Big Ten opener for both teams.

“I have to guard (Edey) every day in practice, so I'm glad someone else is guarding him,” Purdue's 6-foot-9 Trey Kaufman-Renn said.

Edey started slowly, making only one of his first seven shots. The junior dominated after that, finishing 11 of 23 from the field and 9 of 10 from the foul line.

“I thought my first few misses were shots I usually take, a few rolled in and out,” Edey said. “I stuck with it and trusted my game and trusted my skills. Just kept shooting them and they eventually started falling.”

Edey has scored at least 20 points in seven straight games. That tied JaJuan Johnson, who did it in 2010-11, for longest streak in Matt Painter's 18 years as Purdue coach.

Furst started in place of Mason Gillis, who sat out with a minor back injury. Painter said Gillis injured his back lifting weights.

“With Mason out, who is such a hard player and leader for us, we needed guys to step up and Trey and Caleb did a great job with that,” Loyer said.

Loyer said he was able to score in transition.

“Zach is such a force in the middle that I just attacked the weak side and get to the rim is what I had to do to help the team win,” Loyer said.

“I thought the ball was moving more than it has, which is good," Johnsons said.

The Boilermakers used a 15-0 run to take 42-20 lead with 1:34 left in the half. Minnesota scored the final seven points before the break.

“We had a few lapses, but for the most part they were making those long contested two-pointers we wanted them to take,” Edey said of the Gophers shooting 53% in the second half.

Edey outrebounded Minnesota as a team as Purdue held a 41-21 rebounding edge. That led to Purdue's 17-2 advantage in second-chance points.

“The most impressive thing to me was his ability to go get rebounds in and around people," Painter said. “A lot of time you get bottled up and when you have that size, it's hard to have the balance and still explode and get the basketball.”

Minnesota: The Golden Gophers lost their third in a row overall. They've dropped four of their last five against Purdue.