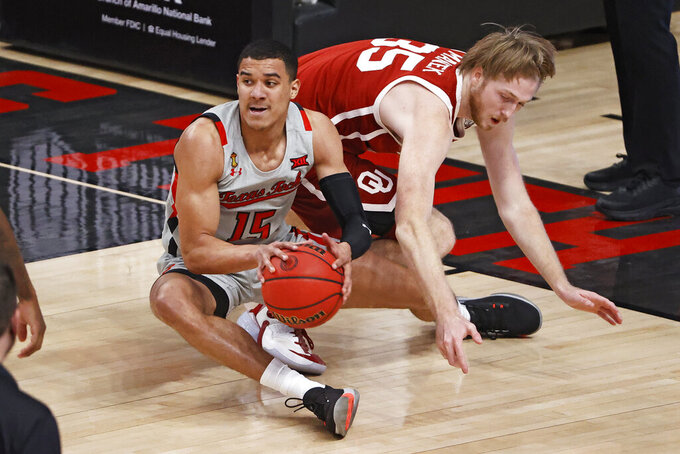 LUBBOCK, Texas (AP) — No. 13 Texas Tech put an end to an impressive streak that had quickly pushed Oklahoma into the Top 10, in an offensive struggle for both teams.

Terrence Shannon Jr. scored all 15 of his points after halftime, with four free throws in the final 39 seconds, and the Red Raiders pulled out a 57-52 victory Monday night. That ended a five-game winning streak by the No. 9 Sooners, who had won three in a row over Top-10 teams but were without two starting guards because of COVID-19 protocols.

“Kind of an ugly game in some ways, but a beautiful game in others,” Texas Tech coach Chris Beard said. “Two teams really defending at a high level. To hold to two Big 12 teams to 33 percent shooting on both side, there’s a lot of really good defense going down.”

“A big-time battle. Proud of our guys, defensively fought their tails off, just needed to helped with a little more scoring,” Sooners coach Lon Kruger said. “Tech’s good defensively too, a kind of the first one to 50 (points)-type mentality.”

Oklahoma (11-5, 6-4), which had missed 13 of its previous 15 shots, responded with seven points in a row, including Umoja Gibson stealing a ball from McCullar and making a 3-pointer with 2:18 left. Gibson, who led the Sooners with 14 points, made another 3 with 1:01 left to get within 52-50 before Shannon converted at the line.

“Just went with the flow of the game,” Shannon said. “Coach went with me a couple of times and I found my rhythm and just happened to make plays.”

Oklahoma guards Austin Reaves and Alondes Williams didn't play because of COVID-19 protocols, after both also missed Saturday’s 66-61 win at then-No. 9 Alabama in the Big 12/SEC Challenge. Reaves, fifth in the Big 12 at 15.8 points a game and third with 5.1 assists, was out because of contact tracing and Kruger expects him to be able to practice later this week. Williams is out until at least next week.

The Sooners moved up 15 spots, two weeks after not even getting a single vote, in the new AP Top 25 poll released earlier Monday. Their quick rise came after being only the third team in NCAA history to beat Top 10 teams in three consecutive games — over then-No. 9 Kansas and at then-No. 5 Texas before beating Alabama.

“That five-game winning streak was one of the best runs I’ve seen in the Big 12, and I’m sure they’ll bounce back and start another run,” Beard said.

McCullar finished with 13 points for Texas Tech. Mac McClung, who was averaging a Big 12-best 21 points in conference games, was held to six points — all on free throws, while going 0-for-7 shooting and 0-for-5 on 3s.

De’Vion Harmon had 12 points for Oklahoma, and Brady Manek scored 11.

Oklahoma shot only 26% from the field before halftime, on 7-of-27 shooting without a single assist. The Sooners were 1 of 10 on 3-pointers. The only one they made was Umoja Gibson’s banked-in 3 from the top of the key after his steal that got them within 14-13.

“Offensively, got a little bit more going in the second half, not much going in the first half for sure,” Kruger said. “But guys kept fighting.”

With the Red Raiders dropping three spots Monday and out of the Top 10, there was no longer any possibility for Oklahoma to become the first team ever to beat Top 10 teams in four consecutive regular-season games.

Oklahoma: The Sooners struggled shooting all night at 33.3% (18 of 54) in their lowest-scoring game of the season. They missed eight shots in a row over a span of more than eight minutes after halftime, when Texas Tech missed five in a row as well. Manek’s second 3-pointer of the half got them within 29-28 with 16:39 left. By time Harmon hit a jumper with 8:32 left, they were still only down 39-37.