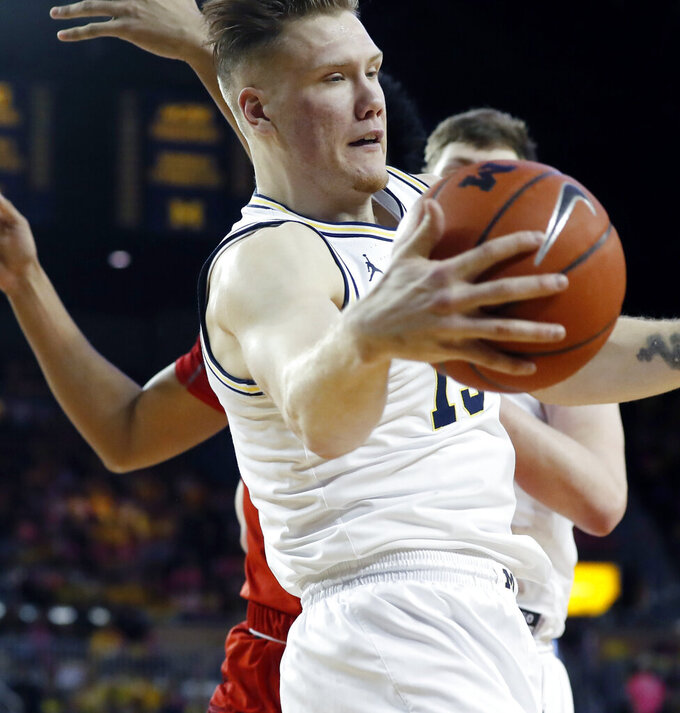 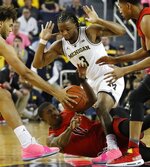 ANN ARBOR, Mich. (AP) — After a startling loss at last-place Penn State earlier in the week, Michigan coach John Beilein had a pretty good idea how his team would respond.

"I had no doubt our defense would be strong today," he said.

Charles Matthews scored 14 points and Iggy Brazdeikis added 13 to lift No. 6 Michigan to a 65-52 victory over No. 24 Maryland on Saturday. The Wolverines raced out to a 14-2 advantage and led by as much as 15 in the first half. It was a struggle for Michigan after that, but that big deficit was too much for Maryland to overcome.

"You know how we are. Usually when we lose a game, we come back swinging super hard," Michigan's Isaiah Livers said. "We played horrible at Penn State."

Michigan led 27-18 at halftime. Maryland turned the ball over 13 times in the first half. The Terrapins (19-7, 10-5 Big Ten) had only three turnovers in the second, but the damage was done.

"They got up to play and we didn't," said Anthony Cowan Jr., who scored 10 points for Maryland. "You can't have those types of starts against teams like that."

Maryland looked like the better team for much of the second, and with the Terps down five, Cowan had a chance to cut further into the lead. But he missed an easy layup, and Brazdeikis made a 3-pointer at the other end to make it 50-42.

Bruno Fernando scored all 12 of his points in the second half for Maryland.

Maryland: The Terrapins are 6-3 when trailing at halftime this season, including 5-2 in Big Ten games. But that's a tough trend to rely on against good teams on the road. Fernando was impressive early in the second half, but that wasn't enough, and Maryland missed a bunch of 3-pointers toward the end.

Michigan: This was a crucial win for the Wolverines in their chase for the Big Ten title. Michigan still has two games left against Michigan State and a rematch at Maryland. When the Wolverines defend like this, they can win in spite of poor outside shooting, but their 7-for-26 showing from 3-point range Saturday leaves plenty of room for improvement.

Jon Teske, Michigan's 7-foot-1 center, scored nine points on just 4-of-13 shooting. He went 1 of 7 from 3-point range, but the one he made gave the Wolverines a 57-46 lead. It also capped a quick seven-point spurt by Teske, who had a couple dunks before that 3.

"I think this is something that he has to do — we can't turn back and say, 'Jon, you're not shooting anymore,'" Beilein said. "We've got to find ways to score points. If a pick-and-pop 3 by a five man is one of those ways, we're going to keep going with it."

Fernando's streak of seven consecutive double-doubles ended. He played less than half the first half, even though he wasn't in foul trouble. Coach Mark Turgeon said he felt Fernando's offensive struggles were impacting his defense.

"We were playing 4-on-5 out there defensively," Turgeon said. "Bruno's been one of our best defenders, right? So that was the most disappointing thing. I can handle missing jump hooks, but you got to bring it at the other hand. ... The second half, he was terrific. He was much better."

Michigan might drop anyway because of the loss to Penn State, and Maryland may rise anyway after beating Purdue by 14 earlier in the week.

Maryland: The Terrapins play at No. 21 Iowa on Tuesday night.

Michigan: The Wolverines play at Minnesota on Thursday night. Michigan beat the Gophers last month on a buzzer-beater by Matthews.