Syracuse's Jim Boeheim hopeful for start of his 45th season 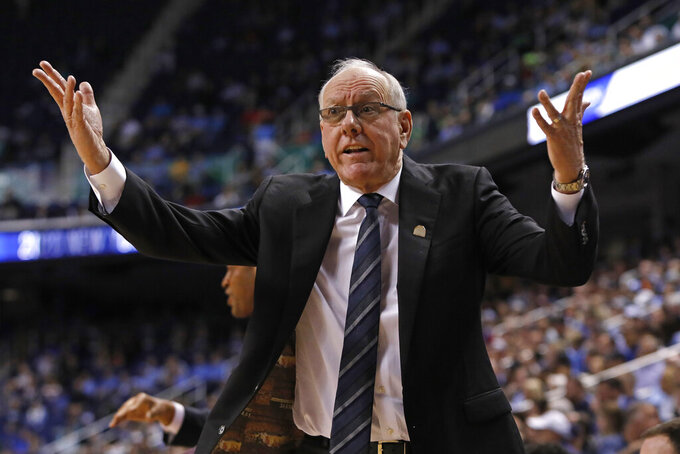 Syracuse coach Jim Boeheim is ready for his 45th season at his alma mater, albeit a different setup this time. Wary of the coronavirus, he dons a mask in practice and wears an electronic gadget that alerts him when he gets too close to somebody for too long.

“I have absolute hope that we’re not going to lose any games," said Boeheim, who turns 76 on Tuesday. “But we’ll have to adjust when it happens.”

Syracuse (18-10, 10-10) finished in the middle of the pack in the Atlantic Coast Conference last season before the pandemic halted everything in March. They're picked to finish there again.

Helping to fill that void will be 6-foot-5 swingman Alan Griffin, a transfer from Illinois. He averaged 8.9 points and 4.5 rebounds as a sophomore with the Illini and hit 41.6% (47 of 113) of his 3-point attempts. Also new to the lineup is 6-5 guard Kadary Richmond, and the coach said the freshman “is going to play.”

“Playing time kind of works itself out. The players decide who plays. I don’t,” Boeheim said.

A glaring deficiency of that team was its negative rebounding mark (minus-1.3). The good news is that all four returning starters have added muscle during the pandemic and sophomore forward Quincy Guerrier, a bruising rebounder, is almost completely recovered from an injured groin.

The 6-10 Sidibe, who led the team in blocks (44) and was second to Girard in steals (40) in the Orange's 2-3 zone, promises to be a force his senior year if he can stay out of foul trouble. He fouled out 10 times last season and had four fouls in 16 other games. But he sparkled at the end of last season, finishing with six straight games in double figures in rebounding. The versatile Dolezaj added 20 pounds to his slender frame and can move to center when needed. Sophomore Jesse Edwards and freshman Frank Anselem are the backups.

Buddy Boeheim averaged 15.4 points in a breakout sophomore season and figures to have a bigger role as a leader. He said the long layoff has helped his game.

“I knew I had a lot of time to get better so I could work on different things every day," Buddy said. "I think my shot's quicker. I think I'm getting to my spots faster and more effectively ... making it harder to locate me.”

“I think he’s probably the most high-motor player I’ve seen in a while,” Boeheim said. “I haven’t seen that many perimeter players that have that kind of motor. He’s in a lot of stuff. He gets involved in a lot of different things.”

Girard was a leader in high school in Glens Falls, New York and graduated as the state's all-time leading scorer. Boeheim made him the starter at point guard and he had a solid freshman year, averaging 33 minutes and 12.4 points and posting a team-high 113 assists with 60 turnovers. Accustomed to the spotlight in high school, Girard easily adapted to the bigger stage. He expects to take on a bigger role this year.

“Freshman year I was still trying to be a leader," Girard said. “This year I'll be a little bit more vocal. Last year we had older guys, veterans who could help me out with that.”

The Orange still haven't completed their non-conference schedule but do know they will open the season Nov. 27 at home against Bryant and will play three of their first four ACC games on the road, starting with Boston College on Dec. 12. The ACC schedule also includes road games against Duke, North Carolina, Louisville, and Virginia. Also on the docket is a home game against Georgetown in January and a road contest against Rutgers in early December as part of the ACC/Big Ten Challenge. Basketball tickets in the Carrier Dome are not available at this time.