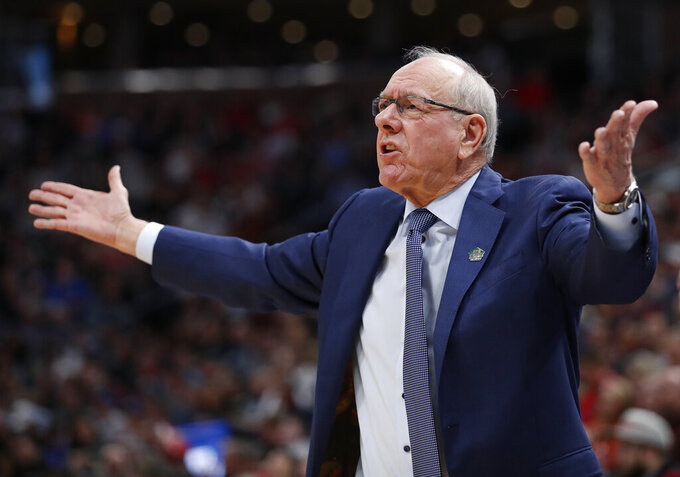 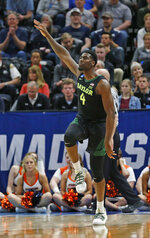 SALT LAKE CITY (AP) — Baylor heard all week about Syracuse's vaunted zone, how long the Orange are, how difficult it is to find openings.

The Bears solved it by going over the top — after getting it inside.

Creating open shots through the high post and kick-outs off drives, Baylor set a school NCAA Tournament record with 16 3-pointers to beat Syracuse 78-68 Thursday night in the West Region.

"The fact that we play zone helped us in this game, being able to go against that and practice every day with our guys flying around," said Baylor's Makai Mason, who had 22 points. "We are used to those shots, kick-out 3s."

The ninth-seeded Bears (20-13) do play a zone, but Syracuse's is much different and the Orange have taller players, so there's been a learning curve for the Bears since Selection Sunday.

Baylor found the gaps in Syracuse's 2-3 zone anyway. The Bears nearly matched the school tournament record of 11 3-pointers in the first half (10) and made 16 of 34 overall.

Baylor shot 54 percent and slowed Syracuse's 3-point barrage in the second half to earn a shot at top-seeded Gonzaga on Saturday.

Mason and Jared Butler (14 points) each hit four 3-pointers in a game that had the most 3s (28) in a non-overtime NCAA Tournament game.

"We thought we could get looks if we executed and it was important we knocked down shots," Baylor coach Scott Drew said. "We made shots and that's what makes an offense work a lot better against the zone."

No. 8 seed Syracuse (20-14) matched the Bears nearly 3 for 3 in a stellar first half before bogging down in the second.

Elijah Hughes had 25 points and hit seven of the Orange's 12 3-pointers. Tyus Battle scored 16 points after missing both of Syracuse's ACC Tournament games with a bruised back.

"They're a smart team, they play a zone," Syracuse coach Jim Boeheim said. "We just didn't cover as well as we needed to."

The Orange have the nation's tallest team — topped by 7-foot-2 Pascal Chukwu — and a history of success in March. The defensive scheme helped Syracuse reach at least the third round of the NCAA Tournament in its eight previous trips, and it made the Final Four as a 10 seed in 2016.

But the zone does have its flaws, as Virginia showed while hitting a school-record 18 3-pointers in the Orange's regular-season home finale.

The Bears hit six 3s in the first six minutes a variety of ways: drive and kicks, after offensive rebounds, extra deep, even a banked-in one by Mark Vital.

Not wanting to be left out of the 3-or-nothing party, Syracuse dotted the shot chart along the arc, hitting nine 3-pointers of its own — one for a four-point play by Battle.

Hughes had 18 points by halftime and looked at Drew after dropping in his fifth 3-pointer of the half.

The trey spigot remained open in the second half — at least for Baylor.

The Bears opened 6 for 13 from the arc and Syracuse had a stretch of nearly five minutes without a field goal as the Bears stretched their lead to 68-59.

The Orange trimmed the lead to three, but Baylor kept hitting shots to keep them at arm's length.

"We didn't stop them," Syracuse forward Marek Dolezaj said. "That was the difference in the game."

Syracuse tried to match Baylor shot for shot, but came up short in its first opening-round NCAA Tournament loss since 2006.

The Bears caught fire at just the right time, ending a four-game losing streak to advance in the bracket.

The Orange had some offensive success, but couldn't sustain it, finishing with 12 assists and 13 turnovers without Howard running the show.

"Obviously, we missed him. He's our point guard," Boeheim said. "I'm not going to sit here and make excuses. He isn't here."

The combined 3-pointers made by Baylor and Syracuse were behind only Drake-Western Kentucky with 30 in 2008 and West Virginia-Louisville with 29 in 2005.