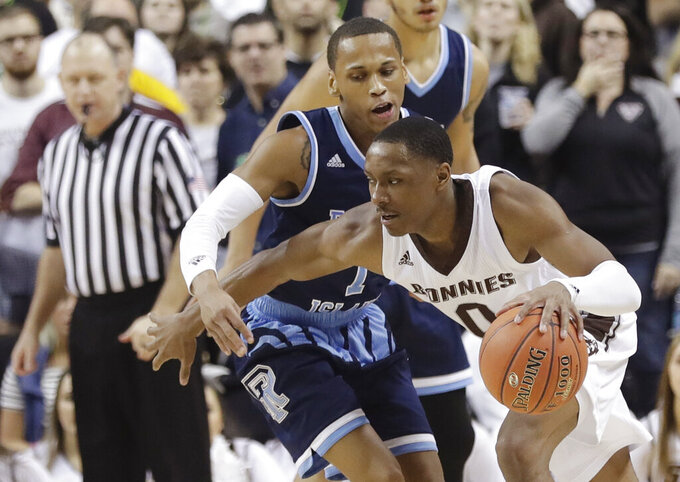 St. Bonaventure's Kyle Lofton (0) protects the ball from Rhode Island's Fatts Russell (1) during the second half of an NCAA college basketball game in the semifinal round of the Atlantic 10 men's tournament Saturday, March 16, 2019, in New York. St. Bonaventure won 68-51. (AP Photo) 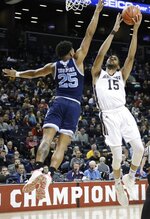 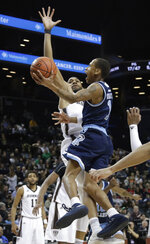 Fourth-seeded St. Bonaventure reached the championship game for the first time since 2012, when the Bonnies beat Xavier 67-56.

Dominick Welch and LaDarien Griffin each added 13 for the Bonnies (18-15). Osun Osunniyi added 10 points and 11 rebounds.

"It was a microcosm of our whole year. We were down. We were struggling. But the kids, they believed," St. Bonaventure coach Mark Schmidt said. "The last five minutes of the first half were crucial."

Griffin's dunk and free throw gave St. Bonaventure a 48-42 lead, and Lofton's floater as the shot clock expired moments later made it 50-44. St. Bonaventure put the game away with a 16-1 run spanning 4:26 late in the second half.

"I told my teammates we just got to worry about defense," Lofton said. "I knew at some point the shots would fall."

"They were tired today and to be honest, so was I," Rhode Island coach David Cox said. "I didn't have the juice. There was a part of me that was frustrated that I couldn't provide the juice they needed."