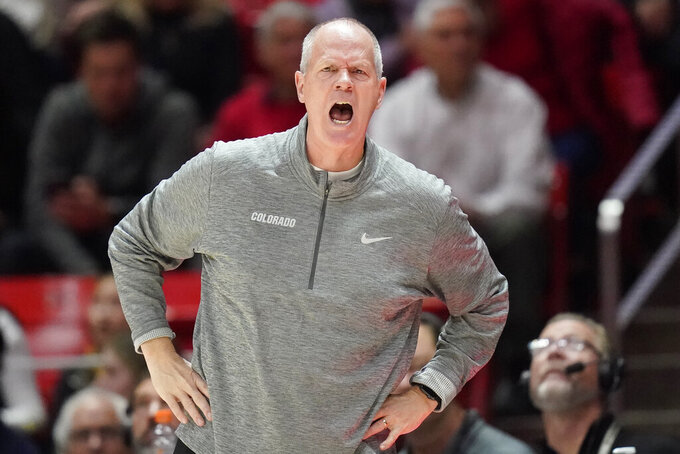 FILE - Colorado head coach Tad Boyle shouts to the team during the second half of an NCAA college basketball game against Utah on Saturday, March 5, 2022, in Salt Lake City. Boyle has amassed a 254-155 record at Colorado as he enters his 13th season. (AP Photo/Rick Bowmer, File)

BOULDER, Colo. (AP) — Not that long ago, Colorado forward Tristan da Silva was a trumpet player in an orchestra.

That talent will come in handy given his next assignment: Get the Buffaloes to march to the same tune. With leaders Evan Battey and Jabari Walker gone, it’s up to da Silva to be one of the leaders of this band.

“The leadership role that I’m taking is showing guys the ropes, making sure people are in the right spot every time,” said da Silva, who averaged 9.4 points and 3.5 rebounds last season. “Just making sure that we, as a team, stay together and have the right energy every day at practice and are locked in mentally.”

It won’t be easy replacing the influence of Battey, the do-it-all forward who had a knack for bonding the Buffaloes. Da Silva will have plenty of help steering the undersized squad, with Nique Clifford and KJ Simpson, who made the league's all-freshman squad a season ago, chipping in.

“That’s the biggest question mark with this team as I look forward, is where will the leadership come from when the waters get rough,” said coach Tad Boyle, whose team finished 21-12 last season, losing to St. Bonaventure in the first round of the NIT Tournament. “Because we know they will at some point. But I’ve got a lot of confidence in our players."

Da Silva is a 6-foot-9 scorer hailing from Munich, Germany. His brother, Oscar, was an All-Pac-12 forward at Stanford (2017-21). Growing up, Tristan da Silva was a standout trumpet player before making the decision to pick basketball over band.

And while his trumpet isn’t with him in Boulder, he’s hoping to orchestrate another NCAA appearance for the Buffaloes, who’ve been to the tournament five times under Boyle. Da Silva spent the offseason in the weight room so he could shoulder all the extra responsibilities.

“It translates,” da Silva said. “Being faster, being stronger, being quicker, jumping higher — all that helps you in your game.”

Boyle has amassed a 254-155 record at Colorado and is close to surpassing Sox Walseth (261) for most wins in program history. What’s more, Boyle has nine of Colorado’s 13 seasons with 20 or more wins.

“I really like this team coming up," Boyle said. “It’s going to be a fun team to coach.”

Jalen Gabbidon and Ethan Wright were once fierce Ivy League rivals — Gabbidon as a guard with Yale and Wright as a guard for Princeton. Now, the graduate transfers are teammates, roommates and leaders on the floor for the Buffaloes.

“As much as Ethan and I used to hate each other, we joke, ‘That’s my brother now,’ Gabbidon cracked.

Gabbidon helped Yale to a pair of NCAA Tournament appearances. Wright was an All-Ivy second-team pick, shooting 40% from 3-point range.

“Both are really smart players and really good kids," Boyle said. "I don’t know if the leadership is going to come so much from, ‘Hey, this is how we’ve done things in the past,’ as it is, ‘This is what you need to do to be successful at this level.’ They’ve got to believe that because I believe in them.”

The highly touted Colorado recruiting class of 2021 is rounding back to health. Simpson and Julian Hammond III made an impression last season as freshmen, while big man Lawson Lovering played limited minutes before being sidelined by a knee injury. Quincy Allen and Javon Ruffin were redshirted as they dealt with injuries.

“We have a lot of guys who can push and exert themselves for however long we need,” Simpson said. "Then another guy who is just as fast — if not faster — can come in for just a little, which is really dangerous.”

The Buffaloes are trying to replace Walker, who led the team in scoring (14.6), rebounding (9.4) and double-doubles (17). Walker was a second-round pick by Portland.

The team also will be without guard Keeshawn Barthelemy after he transferred to Oregon. Barthelemy led the team in 3-pointers made and free throw percentage. In addition, guard Elijah Parquet left for UNLV.

Colorado opens the season by hosting UC Riverside on Nov. 7. The Buffaloes will play Tennessee on the road, along with taking part in the Myrtle Beach Invitational. Among the nonconference games will be Yale — Gabbidon’s former team.