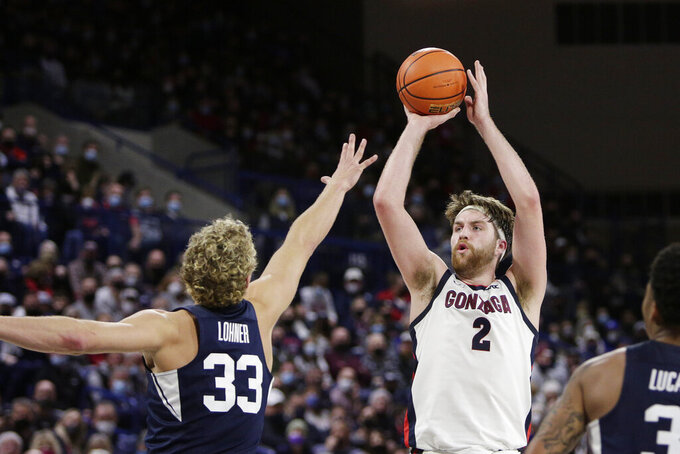 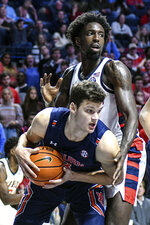 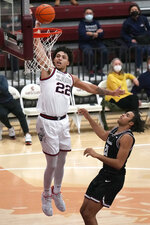 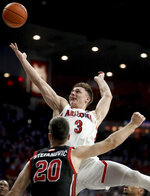 A wild week of upsets led to big changes in the AP Top 25. Amid the chaos, a familiar team returned to the top.

Preseason No. 1 Gonzaga climbed back atop The Associated Press men's college basketball poll on Monday, ending Baylor's five-week run. The Bulldogs had 25 first-place votes, 11 fewer than No. 2 Auburn, but edged the Tigers in overall points to take the top spot.

Auburn has its highest ranking since reaching No. 2 in 1999-2000 after moving up two spots. Arizona, Purdue and Baylor rounded out the top five.

Gonzaga (14-2, 3-0 West Coast) continued its roll since losing to Alabama on Dec. 4, stretching its winning streak to seven games with blowouts over BYU and Santa Clara last week.

The rest of the AP Top 25 didn't fare quite as well, with 13 teams losing, including nine on Saturday. Eight teams fell to unranked opponents.

Baylor's tenure at the top ended with losses to No. 18 Texas Tech and Oklahoma State. It was the first time the Bears lost consecutive home games in nearly six years and ended the reigning national champions' winning streak at 21 games.

No. 16 Southern California also saw its undefeated season come to a crashing end with losses to Stanford and Oregon sandwiched around a win over Oregon State. Seton Hall dropped out of the poll from No. 20 after losing to DePaul and Marquette.

Neither are UCLA's. The Bruins climbed to No. 3 in last week's poll and dropped six spots this week after losing 84-81 to Oregon in overtime. The win was the 700th of Ducks coach Dana Altman's career and dropped UCLA six spots to No. 9 in this week's poll.

“You’re either humbled and hungry like they were trying to pull off the so-called upset, or you’re arrogant without cause because we’ve won nothing,” an incensed UCLA coach Mick Cronin said.

Arizona wasn't expected to be among the Pac-12's elite in its first season under coach Tommy Lloyd, picked to finish tied for fourth in the preseason poll.

The Wildcats (14-1, 4-0 Pac-12) have surpassed those expectations and put themselves among the nation's top teams with a free-flowing offense that can beat teams in multiple ways.

The nation's highest-scoring team shot 51% and had 20 assists on 29 field goals in a 76-55 win over Colorado last Thursday. The Wildcats then overpowered Utah inside, outscoring the Utes 56-28 in the paint during an 82-64 win on Saturday.

Arizona climbed three spots in this week's poll to No. 3, its highest ranking since reaching No. 2 in 2017-18.

No. 16 USC had the biggest drop, losing 11 places and UCLA was next at six.

No. 22 Loyola Chicago moved into the poll for the first time this season following wins over Valparaiso and Indiana State. UConn moved back into the poll at No. 25 after beating St. John's 86-78.

Alabama dropped out from No. 24 with losses to Auburn and Mississippi State. Seton Hall didn't receive a single vote following its two losses to unranked opponents.

The Big Ten and Big 12 had five ranked teams each, followed by the SEC and Big East with four each. The Pac-12 had three ranked teams, with the ACC, American Athletic, West Coast and Missouri Valley notching one each.