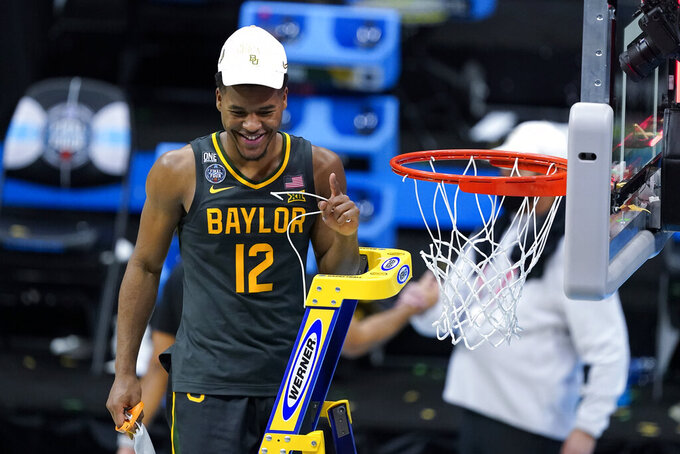 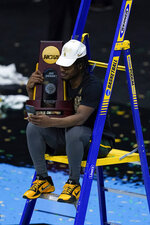 Becoming national champion was a far-fetched dream when Scott Drew first uttered that possibility during his introduction as Baylor’s coach after taking over a decimated and scandal-plagued program nearly 18 years ago.

Yet a title felt oh-so-reachable for All-American guard Jared Butler and his backcourt mates MaCio Teague and Davion Mitchell last season, after the Bears set a Big 12 record with 23 consecutive wins while spending five weeks as the nation's No. 1 team. Their championship opportunity, however, got instantaneously wiped out by the pandemic and the cancellation of the NCAA Tournament.

So they all came back for another season together — and will leave Baylor as national champs.

“When you have a goal for that long, we all knew the goal, everybody knew the mission,” said Butler, the Final Four's most outstanding player. "Everybody sacrificed for it, and I think that’s why we’re here today. And just, whew, so glad that everybody came back. We got the band back (together) and we won.”

Butler and Teague had both entered their names in the NBA draft last April, but ultimately decided to return with Mitchell for another season with a chance to be the best team ever at Baylor.

Led by that dynamic and selfless trio of guards, arguably the best in the country, the Bears wrapped a championship season with a dominating 86-70 win over Gonzaga. Baylor had an 11-1 lead at the first media timeout and maintained a double-digit margin for all but a couple of minutes the rest of Monday night's title game.

“Coaching is like being a parent, and Christmastime you see the kids opening up presents. You see them excited, you're excited,” Drew said afterward, the championship net draped around his neck. “And the guys that have sacrificed for 18 years leading up to this, and these guys were able to take it home.”

The Bears have been to nine NCAA tourneys under Drew, twice making the Elite Eight but losing those regional finals to eventual national champs Duke in 2010 and Kentucky in 2012. There were also tourney-opening losses to 14th-seeded Georgia State in 2015 and 12th-seeded Yale the next year.

While every college basketball player is being allowed to retain this season of eligibility because of the pandemic, there is no expectation that junior Butler or senior Teague will bypass the NBA this time. Mitchell, a third-team All-American and the national defensive player of the year, strongly indicated last month that he too would leave after this, his junior season.

Fifth-year senior Mark Vital, the undersized big man who set a school record being part of 45 Big 12 wins, has no plans to return for a sixth season.

Baylor was 54-6 overall the past two seasons since former transfers Teague (from UNC Asheville) and Mitchell (from Auburn) became eligible to play after having spent a redshirt season together on the campus of the world's largest Baptist university in Waco, Texas.

When the Bears open defense of their national title next season, they should have back half of the eight-deep rotation of regulars used primarily in the NCAA tourney.

Interchangeable big men Flo Thamba and Jonathan Tchamwa Tchatchoua are expected to return after both were in foul trouble in the title game. So are high-motor junior forward/guard Matthew Mayer, an outside shooter who will also drive hard inside, and sophomore guard Adam Flagler, the former Presbyterian transfer who averaged 9.1 points while playing about 23 minutes a game.

With Butler, Teague and Mitchell gone, there will be more playing opportunities for freshman guards like LJ Cryer.

“We just try to set a great example for guys like LJ,” Mitchell said during the NCAA tourney run. “It’s definitely hard for him to play just because we’re older guys. We just try to make him better in practice. And I’ll bet next year he’s going to be one of those players just like us. He’s going to be taking over the guard situation.”

The Bears also have 7-foot forward Zach Loveday and redshirted 6-9 Dain Dainja coming back, along with three prep standouts signed in November that make up their highest-ranked recruiting class in program history.

The roster will change, but not that “culture of joy” that has become so ingrained in the program.

“Our joy is Jesus, others, yourself. It's so tough to put other people in front of you. And teams that do that are obviously more successful,” Drew said. “Our guys, their love for each other ... they deserve all that they're getting.”