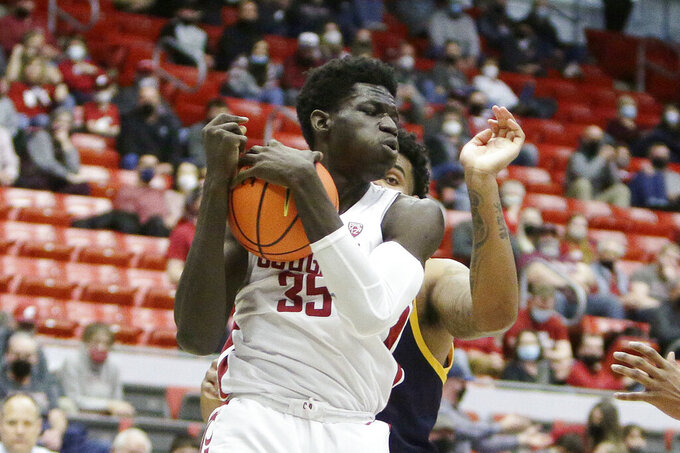 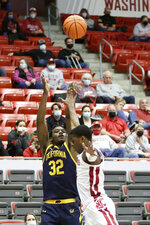 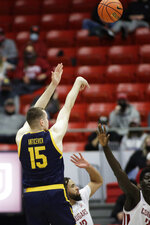 PULLMAN, Wash. (AP) — Sophomore Andrej Jakimovski came off the bench to hit four 3-pointers on his way to a season-high 16 points and Washington State turned back California 65-57 in Pac-12 Conference play on Saturday.

Jakimovski sank 6 of 11 shots — 4 of 7 from beyond the arc — while his teammates made just 2 of 15 tries. Jakimovski also grabbed seven rebounds for the Cougars (10-7, 3-3) in a game that saw 11 lead changes. Michael Flowers added 13 points and five boards.

The Golden Bears (9-9, 2-5), whose largest lead all game was two points, led 29-27 at halftime. TJ Bamba sank a 3-pointer to open the second half for WSU and neither team took a two-possession lead until Noah Williams' rebound bucket put the Cougars up 51-47 with 7:06 remaining in the game. Jordan Shepherd hit a jumper to pull Cal within two, but Mouhamed Gueye, a 50% free-throw shooter, made a pair and Jakimovski buried a 3 to extend the Cougars' lead to 56-49 with 5:02 left to play.

Cal answered with an Andre Kelly layup and a 3-pointer by Jalen Celestine to close to within 56-54 with 3:55 to go. Michael Flowers missed the front end of a 1-and-1 for WSU, but Jakimovski grabbed the rebound and fed Flowers for his only 3-pointer of the game — in six tries — and the Golden Bears never got closer than five from there.

Shepherd tallied 17 points to pace Cal. Kelly totaled 12 points and 14 rebounds for his eighth double-double of the season before fouling out.

WSU travels to play Oregon on Thursday. California, which has lost four straight, will entertain No. 6 Arizona on Jan. 23.