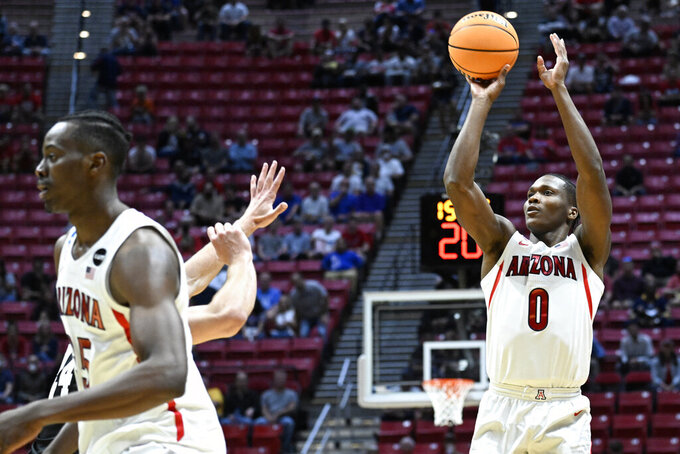 SAN DIEGO (AP) — Christian Koloko scored 17 points, grabbed 13 rebounds and keyed a second-half surge for top-seeded Arizona, which beat No. 16 Wright State 87-70 in the first round of the NCAA Tournament on Friday night.

Bennedict Mathurin scored 18 points and Dalen Terry had 16 for the Wildcats (32-3), who were cheered on by thousands of red-clad fans who made the drive from Tucson. Arizona won its seventh straight game and earned its first NCAA Tournament win since beating Saint Mary's in the second round in 2017.

First-year coach Tommy Lloyd has Arizona in the NCAAs for the first time since 2018. While he has plenty of NCAA Tournament experience after working on Gonzaga's staff from 2001-21, this was the March Madness debut for his players.

“It feels amazing,” said Koloko, who also had six assists and five blocked shots. “You come to Arizona to play in the NCAA Tournament. This is my third year. And this is my first time playing in this tournament. I hope we'll get the win on Sunday, too.”

Arizona advanced to the second round on Sunday to face No. 9 seed TCU, which beat No. 8 seed Seton Hall 69-42.

While the Wildcats certainly noticed the large contingent of their fans, Lloyd said it also felt “like a pretty calm atmosphere. As you get further into this tournament you feel more like you're playing a home or a road game, which is what we're used to. It felt a little like a neutral environment in there today. Just having these guys get a good feel for that is a good deal and a good experience going forward.”

Grant Basile scored 21 points and Trey Calvin had 16 for Wright State (22-14), which beat Bryant 93-82 in a First Four game not far from its campus in Dayton, Ohio, on Wednesday night. The Raiders took a redeye flight to San Diego after their first NCAA Tournament victory.

Arizona led by 16 points late in the first half and was up 42-31 at halftime before the undersized Raiders — a 21 1/2-point underdog, according to FanDuel Sportsbook — pulled within 49-42 on a 3-pointer and a three-point play from Basile.

That woke up the Wildcats, who responded with a 15-2 run keyed by Koloko. The 7-foot-1 center from Cameroon had seven points in the run, including an alley-oop dunk, a hook shot and three free throws. Koloko, who had only four points in the first half, had two dunks in the final minutes of the game.

“I thought we came out well,” Lloyd said. “I was on them all week to come out aggressive, let it rip. Have some fun. First open 3, shoot it to make it. But then after that initial wave, maybe that first emotional hit, you kind of hit a little bit of a lull and they wake up a little bit and you end up in a ballgame.”

“In terms of our defense we had to be tight,” Wright State coach Scott Nagy said. “We forced them into a lot of turnovers. We had to hope they'd miss more shots. And they shot the ball well.”

Kriisa suffered a nasty sprained ankle when he collided with Koloko in the final minute against Stanford in the Pac-12 Tournament quarterfinals on March 10. He was helped off the court and was in a wheelchair when the team headed to the bus.

Wright State also got 15 points from Tim Finke. Tanner Holden was held to 12 points after scoring 37 points and clearing 11 rebounds in the First Four game.

Arizona was back in action for the first time since an impressive run through the Pac-12 Tournament, capped by a big comeback win over UCLA. Arizona also won the regular-season title.