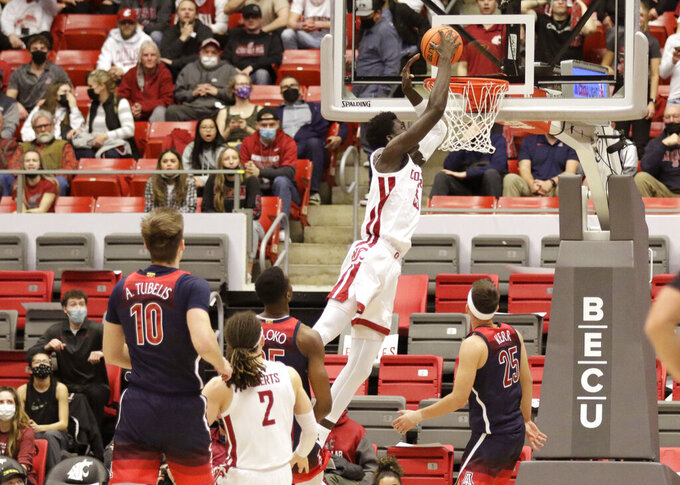 PULLMAN, Wash. (AP) — Bennedict Mathurin scored 20 points, Azuolas Tubelis added 15, and No. 4 Arizona pulled away in the second half for a 72-60 win over Washington State.

Arizona (21-2, 11-1 Pac-12) won its fifth straight and is off to its best start since the 2016-17 season. The Wildcats have won 16 of the last 17 against Washington State and used a big surge midway through the second half after the Cougars threatened.

Arizona shot 49% for the game, but had a key stretch making seven straight shots that saw a four-point lead balloon to 22 in a hurry. Mathurin had all 12 of his second-half points during Arizona's decisive run.

“They’re a really good defensive team, but I thought we did a good job moving them and breaking down some of that pressure they bring,” Arizona coach Tommy Lloyd said. “But I think we could’ve shot even better. We definitely rushed some finishes there.”

Michael Flowers led the Cougars with 16 points, but shot just 7 of 19. Noah Williams came off the bench to score 10 points.

Arizona led by as many as 17 in the first half thanks to an early 13-0 run. But it was Arizona's second-half run that finally put away the Cougars.

“We wanted to guard the 3 today,” Lloyd said. “I felt like if we could make it a two-point, slash and free-throw type of game we’d be in good shape.”

But the Cougars started knocking down some perimeter shots early in the second half and pulled within 39-35. T.J. Bamba missed a layup attempt in transition that would have trimmed the deficit to two, and instead became the start of Arizona's big run.

“They really make you work in a lot of different ways and create a lot of momentum shifters throughout the game,” Flowers said. "We had a chance to cut it to two and they shot it back up, but hats off to them for that.”

Arizona made its next seven shots as part of a 15-4 run. Mathurin later added consecutive 3-pointers and his breakaway dunk with 7:51 left gave the Wildcats a 64-42 lead.

“We practice that — staying calm and poised no matter what the environment is,” Mathurin said. “My teammates are always pushing, so I’m grateful for them.”

"We’ve got to play better. Simple as that,” Washington State coach Kyle Smith said. “We've got to make shots. You’re not going to beat a team that good shooting the way we did.”

Washington State's Mouhamed Gueye exited with 7:13 left after suffering a left ankle injury. The freshman finished with nine points and five rebounds. Smith did not have an update about the severity of the injury afterward.

Arizona: For the Wildcats, the final stretch doesn’t feature a ranked opponent and it will include four of the last seven games on their home floor. They’ll be looking to secure the Pac-12 regular-season title and gain momentum heading into the conference tournament.

Washington State: The Cougars are still seeking a big victory that will help their NCAA tournament resume. They'll have chances down the stretch with road matchups games remaining against Oregon, No. 12 UCLA, and No. 21 USC.

Arizona: At Washington on Saturday.