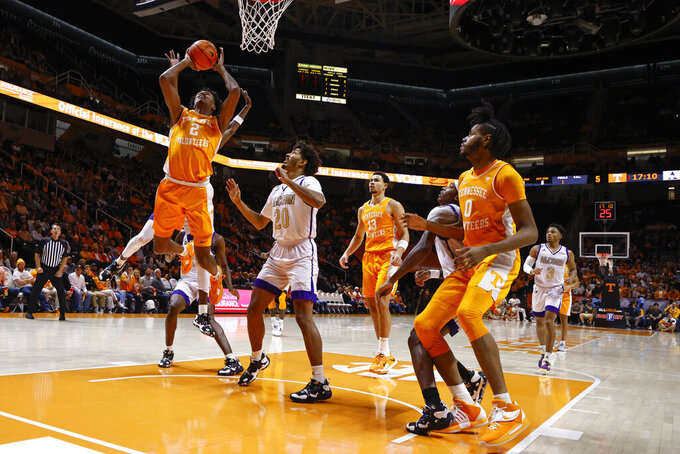 KNOXVILLE, Tenn. (AP) — Olivier Nkamhoua scored 20 points and No. 13 Tennessee flexed its defensive muscles in a 94-40 victory over Alcorn State on Sunday night.

“We had 27 assists on 33 baskets,” said Tennessee coach Rick Barnes. “That's when we're at our best.”

“Our offense starts with coming off screens,” said Nkamhoua, who was the leader with six assists. “There are a lot of cuts in them.”

“We want to get a team-full of guys who want to be the Defensive Player of the Year,” said Barnes.

“(Brewton) did a good job getting downhill,” said Braves coach Landon Bussie. “It was hard shooting over the bigger guys.”

“(Tennessee is) a good basketball team that is physical, big and strong,” said Bussie. “They do a good job contesting shots.”

Teams around the country dread playing Tennessee because of the suffocating defense the Vols play. In the specialty measurement for defenses, the Vols lead the country by yielding 83.1 points per 100 possessions. Six times this season, Tennessee has held its opponents to 50 or fewer points. They did it five times all last season. The Vols have yet to trail at halftime this season.

Alcorn State: An upset win at Wichita State and a coming back from a 30-point deficit before ultimately falling against Grand Canyon have proven that the Braves are capable of impressive performances.

Tennessee: With Josiah-Jordan James out with knee soreness the past four games, Santiago Vescovi has taken a leadership role. He was the MVP at the Battle 4 Atlantis and came into this game 12 points shy of being the 54th player to score 1,000 for the Vols. Vescovi ranks sixth in the Southeastern Conference and 22nd nationally with 2.57 steals a game. James played limited minutes while Vescovi sat out with a shoulder injury from the McNeese game.

Alcorn State: The Braves will have nearly a week off before they return to action on the road against Southern Illinois on Saturday.

Tennessee: The Vols have one more game at home — Wednesday against Eastern Kentucky — before they have two huge battles against Maryland (in the Hall of Fame Classic in New York Dec. 11) then at Arizona (Dec. 17).