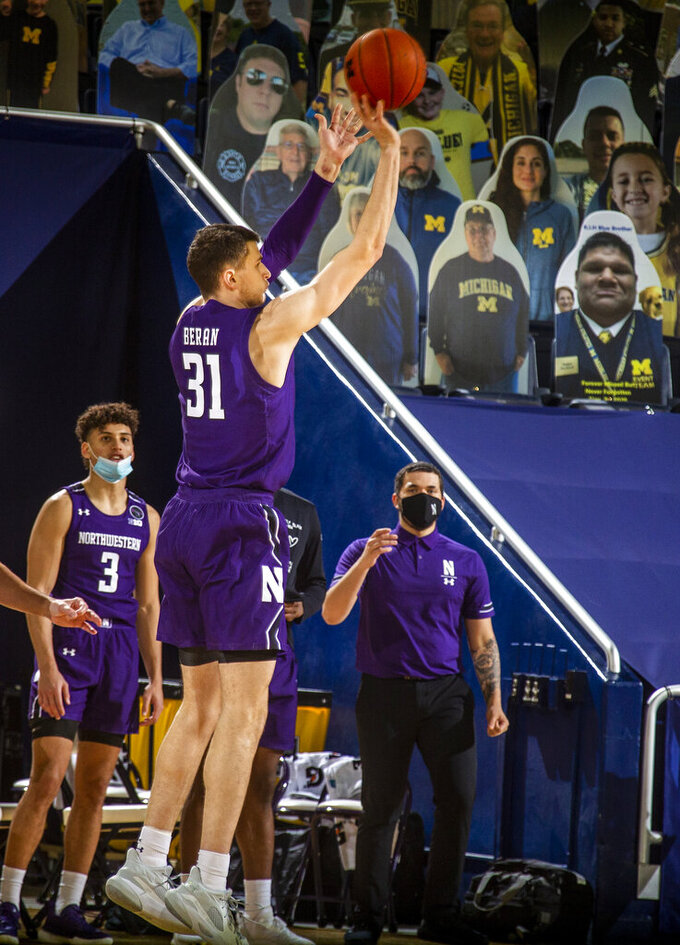 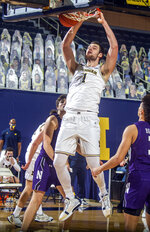 Dickinson scored 15 of his 19 points in the second half, and the 16th-ranked Wolverines routed No. 19 Northwestern 85-66 on Sunday night.

This was the first time these teams had ever met while both were ranked in the Top 25 — but this game was no contest after Michigan scored the last nine points of the first half.

Wagner, Chaundee Brown and Eli Brooks scored 14 points apiece for the Wolverines (9-0, 4-0). They are the Big Ten's last remaining team without a loss.

“I think we just have so many different weapons," Brooks said. "They guard the first action well, we have three elite talents on the other side.”

There were nine Big Ten teams in the most recent AP Top 25, and four of them were ahead of Michigan despite the Wolverines' unblemished record, but this performance against a ranked opponent should resonate. Michigan took control toward the end of the first half and then quickly extended its lead early in the second.

Robbie Beran scored 14 points for Northwestern (6-3, 3-2). The Wildcats have dropped two in a row after a promising start.

Michigan led 34-29 near the end of the first half when the Wolverines made three 3-pointers to go up 43-29 at the break. Brooks had two of them and Wagner made the other.

“We tried to make a push at the end of the first half," Northwestern coach Chris Collins said. "We cut it to five, and then they hit three 3s. I thought that was kind of the key moment of the game.”

Then Michigan really pulled away in the second. An alley-oop dunk by Brooks made it 58-38, and it was 63-40 after a 3-pointer by Isaiah Livers. The Wolverines led by as many as 29 points.

Northwestern guard Boo Buie was hurt in the first half on a play when he lost the ball near midcourt and Brown went the other way for a dunk that made it 34-24. Buie remained down on the court and appeared to be holding his right knee, and he had to be helped slowly to the sideline.

He was able to return but finished scoreless on 0-of-6 shooting.

Northwestern: This was an ugly loss for the Wildcats, who looked like they were punching above their weight. They also lost by 15 to Iowa earlier in the week.

“Michigan just had their way with us tonight," Collins said. "We really haven’t seen that kind of size and physicality and length.”

Michigan: The Wolverines roll on. This was an impressive, balanced effort in which five Michigan players reached double figures in scoring. Three Michigan players had at least five assists, and coach Juwan Howard talked afterward about his players' trust in each other.

“They see it in practice. They see the work that guys put in," Howard said. "They also know within our culture ... we always talk about sharing the game.”

Michigan allowed 13 3-pointers in its previous game against Maryland, and that was a point of emphasis in this game. Northwestern was just 5 of 18 from long distance.

“This was an inspiring game to watch in how we guarded the 3-point line," Howard said. "Our job was to make sure that we did not lose them. Keep our head on a swivel.”

Northwestern seems likely to fall out of the Top 25 after the losses to Iowa and Michigan.

Michigan: The Wolverines host No. 21 Minnesota on Wednesday night, although the Golden Gophers might not be ranked anymore after losing to Wisconsin this past week.