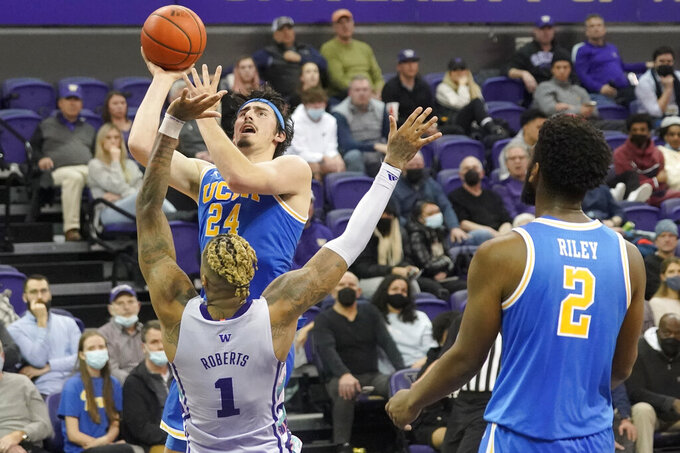 No. 16 Southern California at No. 17 UCLA. The rematch of this rivalry will affect seeding in next week's Pac-12 tournament in Las Vegas. The Trojans and Bruins have already locked up top-four spots and a first-round bye for next week, but are jockeying for position behind No. 2 Arizona. The Wildcats rolled over USC 91-71 to win the Pac-12 regular-season title Monday night while dropping the Trojans into a tie for second with UCLA at 14-5 in conference play. USC won the first meeting 67-64 on Feb. 11 after Drew Peterson scored a career-high 27 points and had 12 rebounds. The winner Saturday gets the No. 2 seed in Las Vegas.

No.2 Arizona, USC and UCLA have locked up top-4 seeds in the Pac-12 tournament, which comes with a coveted first-round bye. The last bye will come down to Oregon or Colorado. The Ducks (18-11, 11-7) play Washington on Thursday, and Washington State on Saturday. Win those and they'll get the first-round bye. The Buffaloes (19-10, 11-8) have one game left, against Utah on Saturday. Oregon and Colorado split the season series, so the tiebreaker would come down to the record against the highest finishing common Pac-12 opponent. That's Arizona, which Colorado beat and Oregon lost to.

Arizona's Bennedict Mathurin and UCLA's Johnny Juzang were named two of the five finalists for the Jerry West Award, given to the nation's top shooting guard. ... Washington Terrell Brown Jr. is one week away from leading the Pac-12 in scoring. The Arizona transfer is ninth nationally with 21.5 points per game, more than four points ahead of Mathurin. ... Oregon's N'Faly Dante is second nationally in shooting percentage at 67.1.

The Pac-12 tournament starts Wednesday in Las Vegas. No. 2 Stanford, No. 14 Arizona, Oregon and Washington State earned byes into Thursday's quarterfinals. The championship game is Sunday. ... Stanford's Haley Jones was named Pac-12 player of the year and Tara VanDerveer was coach of the year. Jones, reigning Finals most outstanding player, averaged 12.5 points, 7.9 rebounds and 3.6 assists. Stanford's Cameron Brink was the conference defensive player of the year and Utah's Gianna Kneepkens was freshman of the year.