No. 19 Iowa State plays with surprise ranking in 6-0 start 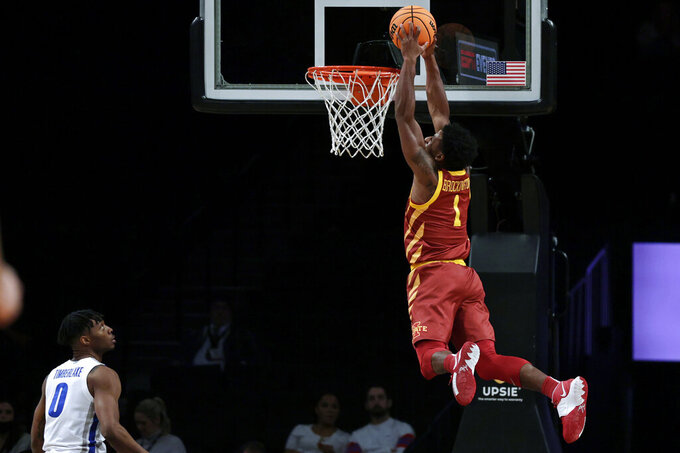 No one expected much from Iowa State as T.J. Otzelberger started his coaching tenure with the Cyclones.

Things have changed less than a month into the season. Iowa State hosts Arkansas Pine-Bluff on Wednesday and visits Creighton on Saturday carrying a No. 19 ranking in the AP Top 25 after a surprisingly strong start.

“I mean we knew what we had,” senior guard Izaiah Brockington said. “But to really see it come to fruition like this and see in the ways we’re doing it -- we’re doing it by defense and we’re doing it by sticking to our principles. I’m really proud of the guys for sticking with it like this. We knew we could play, but we just had to go out and show it every night.”

Iowa State (6-0) was coming off a 2-22 season that included going 0-18 in the Big 12, leading to the departure of Steve Prohm and the hiring of Otzelberger — a former Cyclones assistant coach — away from UNLV. The Cyclones were picked to finish last in the Big 12 in a preseason poll of the league’s coaches.

Yet Iowa State is coming off back-to-back wins against ranked Xavier and Memphis teams to win the NIT Season Tip-Off in New York. The Cyclones are holding opponents to 39% shooting, including 26% from 3-point range, and Brockington (15.5) leads an offense with three double-figure scorers.

Otzelberger hopes this is the start of a long-term climb.

“We reiterated the necessity to have those habits every single day,” he said. “And the intensity and effort has to be consistent. You’re not going to play better in the game than you practice. So we need to practice at such a high level that when we get to the game, we know only one way to do things.”

Gonzaga gets another tough nonconference test this week when it faces No. 16 Alabama in Seattle on Saturday night. The Zags beat UCLA by 20 points in a 1-vs-2 matchup before falling to Duke, which dropped the Zags out of the top spot to check in at No. 3.

That Gonzaga-Alabama game is the only one featuring two AP Top 25 teams this week.

Duke’s win against Gonzaga has propelled the Blue Devils back to No. 1 in their final season under Hall of Fame coach Mike Krzyzewski. The first test with that ranking comes Tuesday night at Ohio State in the ACC/Big Ten Challenge.

The game will mark Duke’s 255th game as a top-ranked team under Krzyzewski, compared with 161 games as an unranked team. The Blue Devils (7-0) then have an extended break before hosting South Carolina State on Dec. 14.

Illinois and St. Bonaventure were the top two vote-getters outside the poll after falling out from last week at No. 14 and No. 16, respectively. The Illini beat Notre Dame 82-72 on Monday night in the ACC/Big Ten Challenge, and next host Rutgers in Big Ten play on Friday.

The Bonnies return home to play Coppin State on Wednesday and Buffalo on Saturday.

LSU and Ohio State are next up, with the Tigers hosting Ohio on Wednesday, while the Buckeyes follow their visit from Duke by hosting Penn State on Sunday in Big Ten play.