No. 2 Baylor, AP All-American Butler get another shot at top 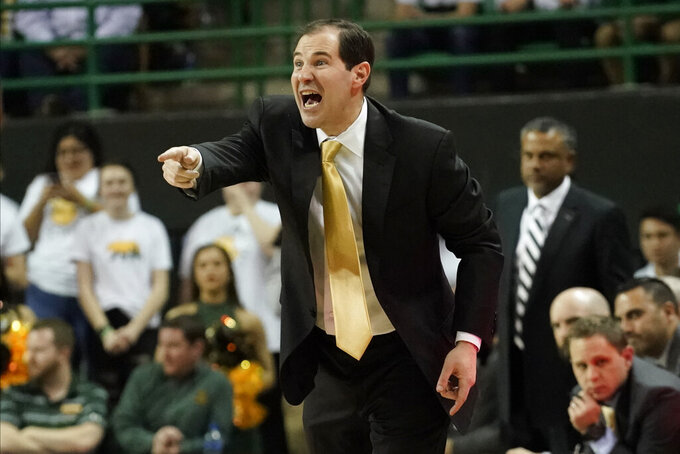 Jared Butler insists he didn't spend a lot of time pondering what-ifs after the sudden end to maybe Baylor's best season, though the preseason AP All-American had a definitive answer to the biggest question.

“Do I think we could have won the national championship? Yes, without a doubt,” Butler said.

Butler and the No. 2 Bears now get another chance.

The junior guard and preseason Big 12 player of the year is one of four returning starters and seven lettermen back from a 26-4 team that set a Big 12 record with 23 consecutive wins and spent five weeks at No. 1. But there was no NCAA Tournament after the pandemic shut down sports in March.

Baylor opens this season only one poll point behind top-ranked Gonzaga in in the AP Top 25. The Bulldogs are one of four top-20 teams the Bears could play in their first five games, all away from home.

“It's a great recognition and accomplishment for what the guys and previous players in the program have been able to achieve, and what people think of the status of our program,” said Scott Drew, going into his 18th season at Baylor. “At the same time, we all know what made us successful last year, that whatever you’re ranked, it doesn’t matter. At the end of the season is the ranking that matters."

Baylor's prospects for this season improved exponentially when top scorers Butler (16.0 points per game) and senior guard MaCio Teague (13.9 ppg) both decided to return after considering early entry in the NBA draft.

“Jared is one of the best guards in the country. We all saw it, we all witnessed it,” said junior guard Davion Mitchell. “Even during the quarantine, he worked really hard. ... I feel like us as a unit, we make him a lot better too. Because we feed off him, seeing him play great and work hard, we work hard too.”

Butler, Teague and Mitchell make up one of the nation's best backcourts, and returning starting forward/guard Mark Vital is a top defender.

“It has a huge impact, not only on the court but what they provide in the locker room chemistry-wise," Drew said of Butler and Teague returning. “Two guys that really work hard and are very well respected and bring energy."

The only players gone who played significant minutes are starting forward Freddie Gillespie and guard Devonte Bandoo after exhausting their eligibility. At the same time, the Bears get two former transfers on the court after they redshirted last season.

Senior forward Tristan Clark is healthy after two injury-plagued seasons. The 6-foot-10 forward was leading the nation at 73.7% in field goal shooting and averaging 14.6 points per game before a season-ending knee injury only a week into Big 12 play as a sophomore two seasons ago. He was still hampered by knee issues last season, when the preseason All-Big 12 pick started only six of his 22 games, and averaged 4.0 points a game.

“First and foremost, Tristan’s body is in a lot better situation than it was last year. He’s probably 20 pounds lighter, and because of that it does take some wear and tear off his knee. It does give him more mobility,” Drew said. “Tristan’s a skilled player, and his touch and feel for the game is still there.”

LJ Cryer is a true freshman guard from Katy, Texas, who could make an early impact for the Bears, who also added 7-foot forward Zach Loveday from Ohio and 6-9 post Dain Dainja from Minnesota.

This is definitely the toughest opening five-game stretch ever for Baylor, and maybe for any team. And those games will all be played over an 11-day stretch in three different places. The Bears open against No. 18 Arizona State on Nov. 25, and the next day on Thanksgiving likely play No. 3 Villanova (or Boston College) at Mohegan Sun in Connecticut. They then go to Newark, New Jersey, to play Seton Hall as part of the Big 12/Big East Battle, before going to Indianapolis for games against No. 8 Illinois and then No. 1 Gonzaga. Baylor's Big 12 opener is at home Dec. 13 against No. 19 Texas.