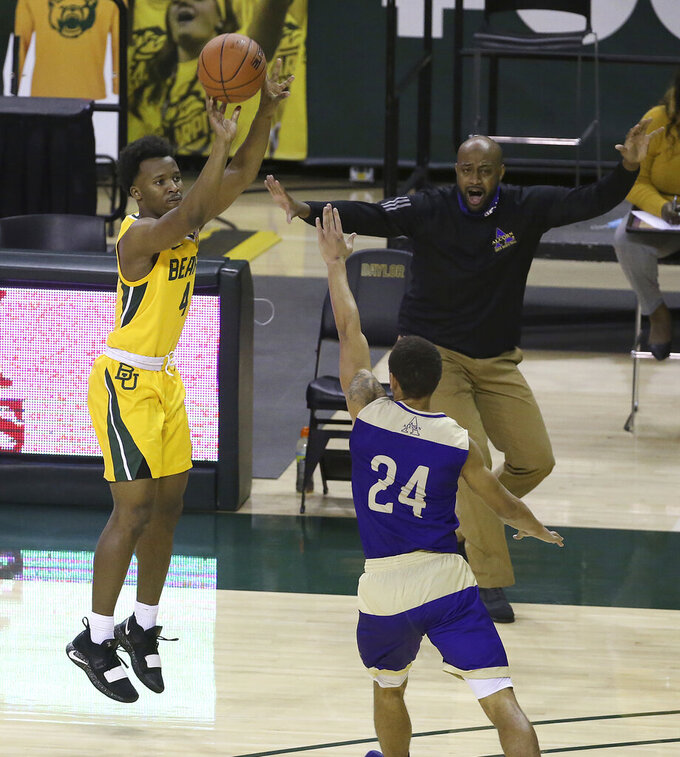 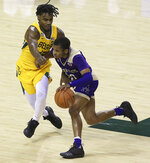 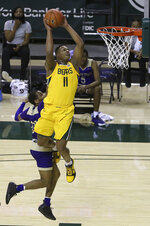 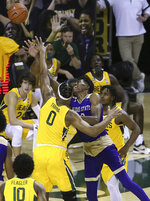 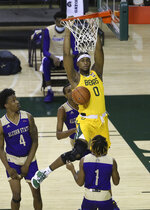 WACO, Texas (AP) — Baylor coach Scott Drew knows given a choice, his players would rather being playing games. They won two in 23 hours.

“Coming back from break, you're either practicing or playing,” Drew said. “I know guys would rather play a game than be in practice for two or three hours."

MaCio Teague had 18 points to lead six players scoring in double figures the Bears in a 105-76 victory Wednesday over Alcorn State, just a day after a 37-point win over Central Arkansas.

Baylor (8-0), the only Big 12 team without a loss, returned from its Christmas break with back-to-back midweek afternoon games. They were the last games for the preseason conference favorites before resuming Big 12 play this weekend, with the Alcorn game a late add after some earlier changes to the schedule.

“You schedule two (games) in hopes that you definitely get one in. And we were able to be blessed to play two games, and it allowed us to try some things we use in conference, and be able to do that against people besides ourselves," Drew said. “We were able to give some guys some playing experience, and all of that stuff bodes well and helps you down the line because you never know when your number’s going to be called.”

Corbett had six early points, including back-to-back jumpers that tied it at 12 about six minutes in after Teague’s second 3-pointer.

Baylor responded with a 17-2 run in less than five minutes, going ahead 29-14 when Butler had a steal that he converted into a fastbreak layup.

“I thought Alcorn did a good job coming in and being excited to play and made some shots. Tried to hold it, and not let the game get too up and down, and credit them and their coach for a good game plan,” Drew said. “I thought our guys did a better job of ... settling down and getting stops. And then once we were able to get in a rhythm and a routine, obviously we were able to pull away.”

The Bears got their next basket when Mayer had a steal and got the ball to Butler, who made an alley-oop pass to Mark Vital for a slam. Mitchell then had a steal, and after a media timeout hit a 3-pointer.

Vital later had a steal before his fastbreak dunk made it 49-24.

Alcorn State had 14 turnovers in the first half. Baylor turned those into 26 points, only one fewer than the Braves scored overall while going down 59-27 at the break. The Braves had only four turnovers after halftime, when they outscored Baylor 49-46.

Alcorn State: The Braves, who were without leading scorer Troymain Crosby (18.7 ppg), get an extra couple of days before their SWAC opener. Texas Southern, their scheduled opponent Saturday, had to postpone its first two conference games because of a positive COVID-19 test and contact tracing.

Baylor: The Bears again showed their depth, with their bench scoring at least 33 points — like in every game this season. ... The Bears have scored 80 points in all eight games, their longest streak since 11 in a row to start the 1984-85 season. They tied a school record with their eight double-digit win in a row, last done to start the 2011-12 season.