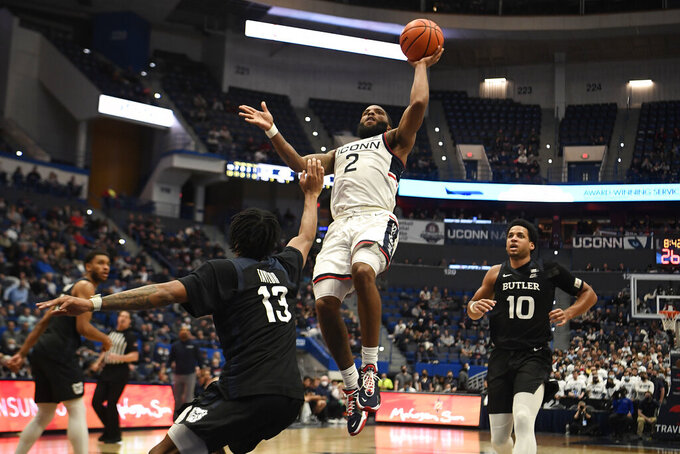 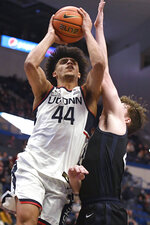 The 6-foot-9 sophomore scored 13 points and grabbed 15 rebounds on Tuesday in the No. 25 Huskies' 76-59 win over Butler, the first of two games this week between the programs. But Sanogo made just six of his 14 shots and missed several layups.

It was the third straight double-double for Sanogo. He was joined by Andre Jackson, who had his first career double-double, scoring 12 points and grabbing 10 rebounds for Connecticut (12-4, 3-2 Big East), which returned to the rankings this week for the first time since mid-December.

R.J. Cole had 17 points to lead UConn in scoring, while Jordan Hawkins had 14 points off the bench and Tyler Polley chipped in with 10.

“It's good to see guys come in and play well to back up the guys who started the game,” Cole said. “And that's the strength of our team. We've been talking about depth all year and so finally, it's starting to click for us.”

UConn led by 15 points at halftime and Sanogo scored four points after the break to push the lead to 43-24. Butler cut it to 47-36 on a 3-pointer from Lukosius, but that was as close as the Bulldogs would get.

This game was originally scheduled for Jan. 1, but was postponed because UConn was dealing with COVID-19 issues.

Butler: This was the second of four straight games for the the Bulldogs against ranked teams. They lost 82-42 to No. 11 Villanova on Sunday and must face the Huskies again on Thursday in Indianapolis, then travel to No. 21 Providence next Sunday.

Lukosius said that makes the next two games very important.

UConn: The Huskies have not played the same opponent in two consecutive games since 1996, when they beat Seton Hall in the regular-season finale and again in the Big East tournament. The last time they played the same team back-to-back in the regular season was in February 1992, losing twice to Georgetown.

UConn missed its first four shots and didn’t score until Sanogo hit a short turnaround in the lane, 3 minutes into the game. It started a 10-0 run.

Cole had five of those points and scored his first eight from the foul line before taking and making his first official shot from the floor.

“To have him attacking the rim like that and getting to the foul line, it really helped us get going,” Jackson said.

Butler coach LaVall Jordan said he's never been in a situation where his team has played the same team twice in a row in such a short span of time and he wasn't sure if it will help his team or hurt it.

“I asked Danny if they wanted to hop in the plane with us, but he turned that down,” he joked. “We'll just turn around and make some adjustments and get ready to battle,” he said.