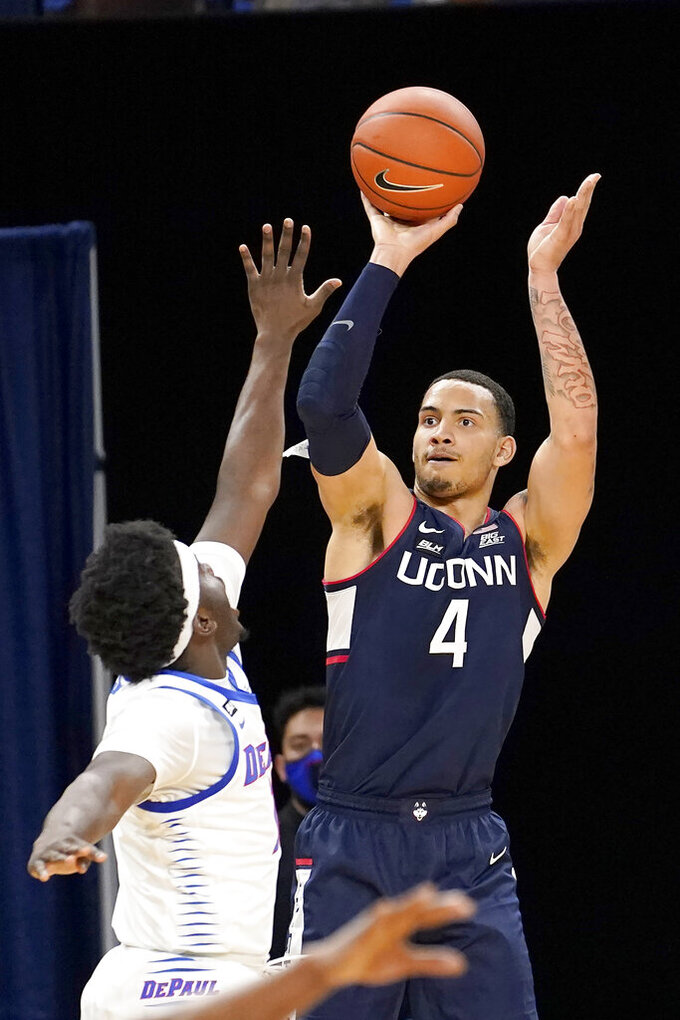 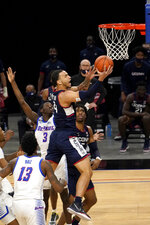 The Huskies (7-1, 4-1 Big East) cracked the Top 25 for the first time since they were ranked 18th in the 2016-17 preseason poll, then got all they could handle from a struggling DePaul squad before pulling out their fourth straight win.

Connecticut scored the final eight points despite some shaky free throw shooting down the stretch, and improved to 12-1 against the Blue Demons (1-4, 0-4).

Tyler Polley and R.J. Cole each added 12 points for the Huskies. Cole hit a 3-pointer to start the game-ending run, and the Huskies came out on top despite shooting 5 of 18 from beyond the arc. Leading scorer James Bouknight missed his second consecutive game with an elbow injury.

DePaul lost its fourth straight since beating Western Illinois late last month in an opener delayed by COVID-19 issues. Darious Hall was the only Blue Demons player in double digits with 10 points.

UConn, which routed DePaul by 21 last month, trailed by four before Cole nailed a 3 and Martin made a layup to put the Huskies on top 52-51 with just under five minutes remaining.

After DePaul's Nick Ongenda dunked, UConn's Brendan Adams tied it by hitting 1 of 2 from the foul line. Adams then got blocked from behind on a fast break by Javon Freeman-Liberty before Martin and Polley each hit 1 of 2 at the line to put the Huskies on top 55-53.

Martin scored on a putback and drove for a layup to make it a six-point game with just over a minute remaining. Cole went 1 for 2 at the line with 26 seconds left to finish the scoring.

UConn, playing its third game in seven days, looked as though it might roll to an easy win when it jumped out to a 17-6 lead. But the Blue Demons got right back into the game.

Hall drained a 3 to cut it to 31-30 with 45 seconds left in the first half. Martin missed a 3 and a layup on the final possession before hitting two free throws with less than a second remaining.

UConn: The Huskies are back in familiar territory, in the Big East again after seven seasons in the American Athletic Conference and with a spot in the Top 25.

DePaul: The Blue Demons hung in until the closing minutes. But the result was a familiar one.

UConn: The Huskies host St. John's next Monday. They were scheduled to play No. 3 Villanova on Friday, but that game got postponed because of COVID-19 issues within the Wildcats' program.

DePaul: The Blue Demons will try to stop their skid when they visit Georgetown on Wednesday.