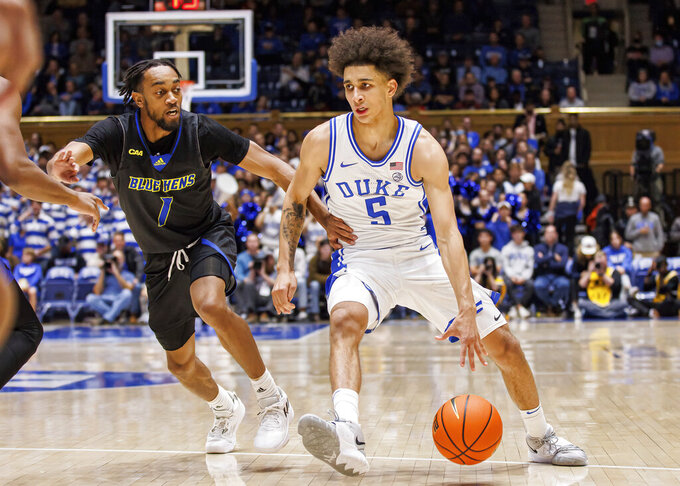 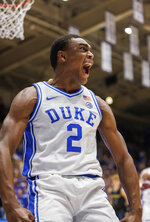 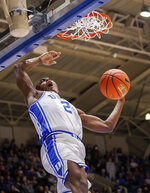 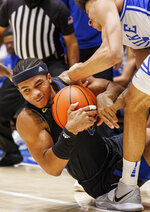 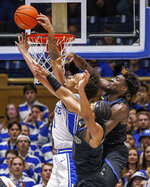 Filipowski made 7 of 13 shots and had eight rebounds for the Blue Devils (3-1). Tyrese Proctor added 13 points and 10 rebounds for his first career double-double, while Mark Mitchell had 12 points and Jacob Grandison added 10 for Duke.

“I’m really proud of the effort we had tonight and thought it was a great response,” Duke coach Jon Scheyer said. “Delaware really tested us. We knew they had two really good players in Nelson and Davis, and the job we did on them was terrific. I just loved our defense, our energy, our effort that we came out with in the second half.”

After Delaware scored the opening basket on a 3-pointer from Davis, the Blue Devils broke off an 18-7 run to take the lead. Duke was effective in the early portion of the game largely because of the play of Proctor, who had nine points in his first 11 minutes on the floor.

“We were right there,” Delaware coach Martin Ingelsby said. “For us to be able to come down here and compete for about 30 minutes on a big stage and in a really tough road environment gives us a reference point moving forward.”

The Blue Hens trimmed the deficit to seven points with about 12 minutes to play in the second half, but after a media timeout, the Blue Devils responded with a 22-2 run to take a 27-point advantage. That stretch from Duke was highlighted by a fast break one-handed dunk by Jaylen Blakes.

"It was a great moment to get that dunk with the crowd behind you," Blakes said.

Duke’s win saw the debut of highly-touted freshman Dariq Whitehead. The 6-foot-7 wing came off the bench and had six points in 15 minutes. Whitehead missed Duke’s first three games while recovering from surgery to repair a fracture in his right foot.

Duke: The Blue Devils bounced back from a neutral site loss to No. 6 Kansas in a big way. Poor shooting from deep and 18 turnovers hounded Duke in its loss to the Jayhawks. Against Delaware, the Blue Devils flipped the script in those areas, shooting 42.9% from behind the arc and nearly cutting their turnovers in half.

Delaware: Before falling far behind late in the second half, the Blue Hens trailed by just six points at intermission. If the effort that Delaware displayed in the first half is replicable, it should make the Blue Hens competitive in the Colonial Athletic Association again.

Duke’s size presented a big problem for Delaware as the game wore on. The Blue Devils had a noticeable advantage in rebounding, winning the battle on the boards 47-25, and 16 of those Duke rebounds were on the offensive end. The Blue Devils turned those into 24 second-chance points.

The Blue Devils outscored the Blue Hens in the paint 46-26. Duke has five players on its roster listed at 6-foot-10 or taller.

It was the first start of the season for Duke’s Dereck Lively Jr., who fouled out after notching five points and four assists in 15 minutes. … Delaware has never beaten a ranked opponent in program history and is now 0-36 against Top 25 teams.

Delaware: Next Friday in Philadelphia, the Blue Hens face Colgate in the Cathedral Classic.