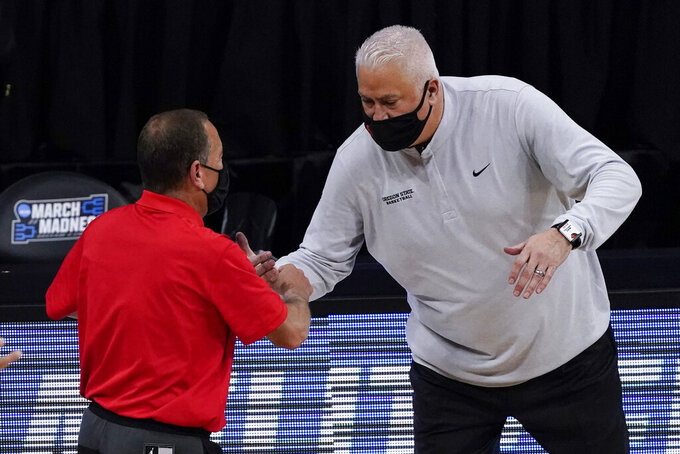 After Houston beat Oregon State to reach the Final Four, the coach and his wife, Karen, walked over and waved to Cougars fans. Then he celebrated his second Final Four trip by hugging his son and assistant coach, Kellen. His daughter, Lauren, is the team's director of external affairs.

Finally, he took a few moments to reflect on the man who would have enjoyed the game even more than him or Oregon State coach Wayne Tinkle — the late national-championship winning coach Jud Heathcote of Michigan State.

“My two kids were born in Montana. I coached in Montana, and Wayne was a great player at the University of Montana," Sampson said after his 1,000th career game as a head coach. “When I talked to Wayne before the game, I said, ‘You know who would love to watch this game tonight was Jud Heathcote.' Jud gave me my start at Michigan State, and Wayne and I are both part of Jud’s coaching tree, so I was thinking about Jud tonight."

Heathcote hired the then-22-year-old Sampson as a graduate assistant at Michigan State in the late 1970s. Later, he helped Sampson get jobs at Montana Tech and the Washington State job, which led Sampson to Oklahoma — where he made his first and only other Final Four appearance in 2002.

Sampson fell short of the national championship year and when it looked like he might make it back in 2008 with Indiana, was forced out before the end of the season because of NCAA violations. Now, 13 years later and a short stroll from the governing body that nearly ended his career, Sampson made it back with some of the same lessons he learned from Heathcote all those years ago.

“Jud was unique, he was a hard worker, he came from humble beginnings," Sampson said, noting that Heathcote's top student, Magic Johnson, texted him Monday. “His greatest strength was his ability to get the most out of people. But the guy that influenced me the most that I would give the most credit to was my father, John W. Sampson. I wish he and my mother were here tonight to see this."

Conventional wisdom might suggest the pressure should be increasing as the finish line draws nearer. Not a chance with this team.

“There’s a looseness about them because you’ve got Drew Timme on your team, for one, and Joel Ayayi has just an infectious enthusiasm about him," Few said. “Heck, Jalen’s 19 years old. This is his first time through. He doesn’t know any different. So he’s having a great time."

There may be another reason things haven't gotten too hairy for the Zags (29-0) yet — Timme's handlebar mustache.

NO SLEEP TILL INDY

After arriving at the hotel about 1 a.m. Monday, Enfield spent the next three hours watching video of the Trojans' opponent in the West Region final, top-seeded Gonzaga. The wake-up call came at 11:15 a.m. and then it was off to the NCAA's mandated news conference and an early practice at Lucas Oil Stadium.

“It is a quick turnaround time, especially when you played a late game and your players get to bed at 3 in the morning,” Enfield said. “So we’ll to do our best to get rested, take a nap this afternoon and then be up be ready to go Tuesday night.”

USC will have several hours less rest than Gonzaga before the game. The Zags played the first of Sunday's four regional semifinals. USC played in the final game of the day.

The Trojans won't complain after reaching the Elite Eight for the first time in 20 years.

“This is what it is. It’s March Madness," USC guard Tahj Eaddy said. “It’s been a crazy year all year due to COVID-19. This is really no surprise. We’re going to make the most of it.”

Through their long history as crosstown foes, there’s one place USC and UCLA have never met: the NCAA Tournament.

It could happen next weekend, though it would take two upsets. First, the Trojans would have to knock off unbeaten Gonzaga. Then, if the 11th-seeded Bruins beat No. 1 seed Michigan in the East Region championship game, the crosstown rivals would finally meet in the NCAA tourney.

That matchup would also assure the Pac-12 of having a team in the title game after the conference has outplayed the rest of the Power Five in the tourney.

While UCLA has a record 11 championship banners, it hasn't played in the Final Four since 2008. USC has never made it and this is the first time the two Los Angeles schools have ever made the Elite Eight in the same season.