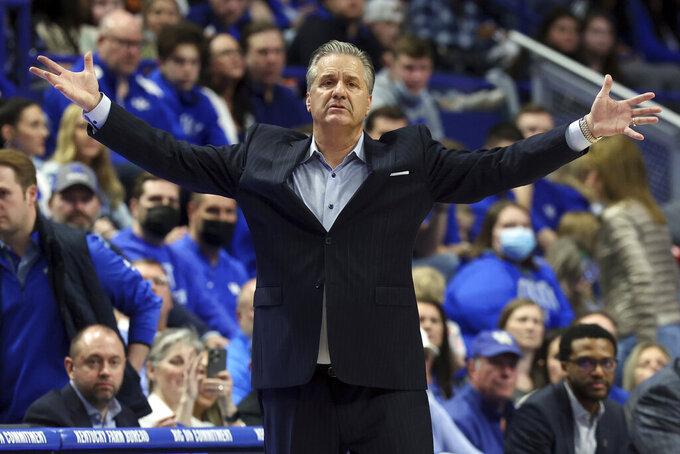 Kentucky coach John Calipari reacts to a call during the second half of the team's NCAA college basketball game against Mississippi in Lexington, Ky., Tuesday, March 1, 2022. (AP Photo/James Crisp) 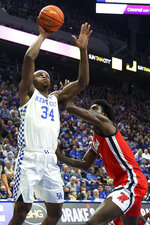 TAMPA, Fla. (AP) — Auburn spent a good portion of this season ranked No. 1. Kentucky is an eight-time national champion with expectations of contending for another title, and Tennessee and Arkansas may be capable of making deep runs in the NCAA Tournament, too.

With those teams perched among the best in the nation, plus three or four others needing a victory or two in the Southeastern Conference Tournament bolster their resumes, the SEC arguably has never been stronger from top to bottom.

“Our league is at an all-time high. It’s just incredible the level of competitiveness, the home-court advantages, the facilities, the exposure,” said Florida coach Mike White, whose Gators own a last-season upset of Auburn and need a good showing here to strengthen their case for a spot in the NCAA field.

“It’s a big-time league, arguably the best league in the country. There’s a bunch of pros in this league, a bunch of really good coaches, a bunch of proud fan bases,” White added. “It is incredibly competitive, and I think that will be showcased in this tournament and again in the NCAA Tournament.”

The Missouri-Ole Miss winner advances to play fifth-seeded LSU (21-10) on Thursday, while the Vandy-Georgia survivor continues against sixth-seeded Alabama (19-12).

“There’s not another 8-9 game in college basketball anywhere near the caliber the 8-9 game between A&M and Florida. Not even close,” Auburn coach Bruce Pearl said.

“Both of these teams are probably a win or two away from being in the tournament, particularly a win against us. So, they’ll both be playing with their hair on fire, whichever one gets there,” Pearl added. “Both really well coached. We played very well at home against both teams and struggled at Florida. So regardless of who comes out of this one, it’ll be a really challenging contest.”

Auburn last won the league tourney in 2019, ending a four-year reign by Kentucky. Tennessee hasn’t won the SEC Tournament since 1979, and Arkansas last did it in 2000.

“We’re trying to win it, obviously, but we’re also trying to make sure we know what we’re doing to get ready for the NCAA Tournament," Kentucky guard Sahvir Wheeler said. “You know, playing for seeding, making sure we can be the highest seed that we can. Making sure we’re starting to get better as a team.

Kentucky forward and SEC player of the year Oscar Tshiebwe said he is taking a nothing is going to be easy mentality into the tournament.

Auburn coach Bruce Pearl believes more than half the 14-teams in the SEC will get strong consideration for an NCAA tourney bid.

“I think a lot is going to depend on how the tournament plays out, and then of course how many upsets there are around college basketball,” the Auburn coach. “I think there are six locks and there are potential for seven or eight teams to be able to get in.”

BACK IN THE SUNSHINE STATE

The men’s conference tournament is being played in Florida for only the third time. Orlando hosted the event in 1990 and Tampa was the site in 2009.

Four of the past six SEC Tournaments were played in Nashville, Tennessee, where it is scheduled to return for at least the next several years.

Amalie Arena is about two hours south of Florida’s campus in Gainesville.

“Obviously it’s in Florida so it’s easier for us to get over there pretty quick and get ready. For these other teams, being out of state or maybe if they’re in a colder state, coming to Florida is probably awesome for them,” Gators forward Colin Castleton said. “It’s definitely a great experience. ... At the end of the day you’ve got to enjoy it but also really lock in and focus on what the goal is, and that’s to win the games.”