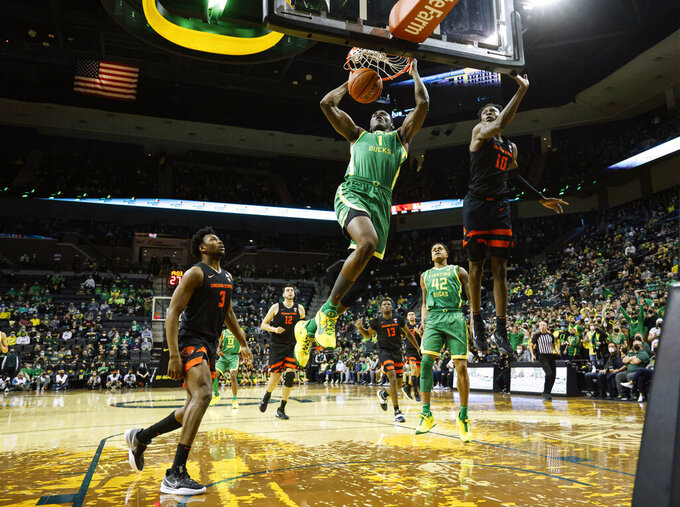 Will Richardson added 15 points while Eric Williams Jr. and De’Vion Harmon each scored 14 points as Oregon (13-7, 6-3 Pac-12) swept the season series against its in-state rival for the first time since 2016-17. The Ducks shot 55.4% from the field while outrebounding Oregon State 40-37.

“It feels good going into February,” Young said. “We are ready to get back into the lab, we are not done yet. We have a lot of work to do. We still have to win a lot more games. This is just the beginning.”

“I thought our energy level was good and our bigs set the tone inside, not allowing them to get to the rim,” Oregon coach Dana Altman said. “That’s why their shooting percentage was not good and we outscored them 40-18 in the paint, that was a big difference.”

Oregon shot 54.5% from the field in the first half to take a 44-25 halftime lead after Williams beat the buzzer with a 60-foot shot.

Oregon State led 17-16 after Maurice Calloo hit a 3-pointer, but Young followed with five straight points before Williams scored to put the Ducks ahead 23-17.

“I was trying to raise the tempo and energy of my team,” Young said. “We had a nice crowd that got us going so I was trying to pick up the energy for my teammates to get them going and get the outcome we got tonight.”

Young scored again and Harmon hit a 3-pointer to cap a run of 11 straight points that put Oregon up 28-17.

Young pushed the lead to 37-22 on a 3-pointer before the Ducks closed out the half with seven straight points, including five from Williams, who led UO with 12 points in the half.

Harmon scored the first seven points of the second half to push Oregon ahead 51-32 before the Ducks went up 57-36 on a layup by Rivaldo Soares.

Oregon State: The Beavers lost all five games they played in January to fall into 11th place in the conference. … OSU has not been able to capitalize on the momentum of last year’s run to the Elite Eight of the NCAA Tournament. OSU’s 15 losses are already more than last year and it’s 1-7 conference mark comes after a 10-10 finish last year.

Oregon: The Ducks bounced back from an 82-78 loss to Colorado on Tuesday that likely cost them a chance to return to the Top 25 on Monday. … Oregon is tied for fourth in the Pac-12 as it prepares to go on the road for four of its next six games.