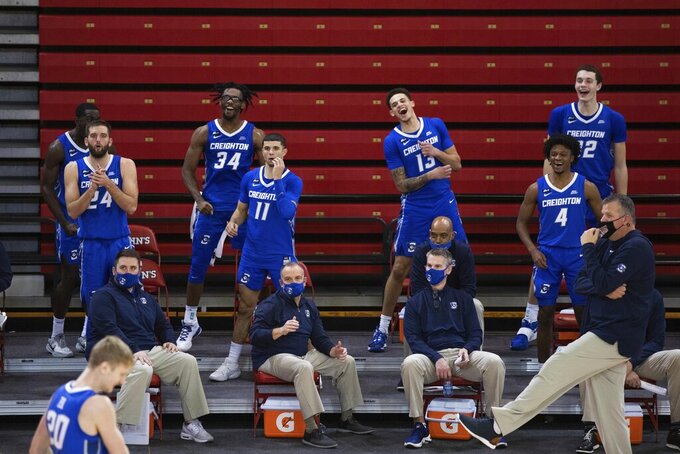 The Creighton bench cheers at the end of second half of an NCAA college basketball game against St. John's, Thursday, Dec. 17, 2020, in New York. (AP Photo/Kevin Hagen) 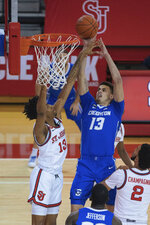 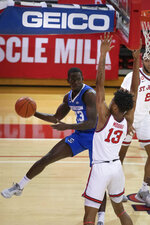 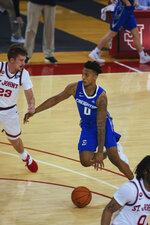 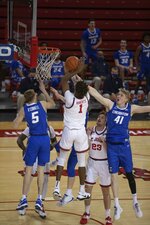 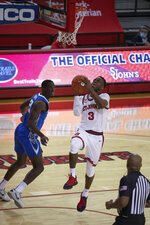 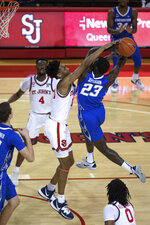 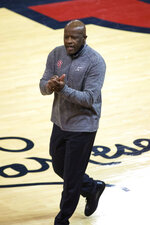 NEW YORK (AP) — Clicking on offense all night, No. 9 Creighton had little trouble putting its recent loss in the rearview mirror.

Marcus Zegarowski scored 20 points, shooting 6 for 7 from 3-point range, and the Bluejays cruised to a 94-76 victory over St. John's on Thursday.

Denzel Mahoney had 16 points and freshman center Ryan Kalkbrenner added a season-best 15 off the bench to help Creighton (5-2, 1-1 Big East) bounce back from a home defeat in its conference opener Monday night.

“When you come off a loss like we did against Marquette, you hope your team will respond,” coach Greg McDermott said. “I felt like we responded in practice and obviously that preparation carried over to the start of the game.”

Damien Jefferson had 10 points, 10 rebounds and eight assists, and Christian Bishop added 11 points and 10 rebounds — becoming the first pair of Creighton players to have a double-double in the same game since Martin Krampelj and Ronnie Harrell Jr. against Nebraska in December 2017.

“I know that on this team I'm not going to be the guy that scores 30 every night, but I can also be the guy who gets defensive stops and gets multiple rebounds and just encourages my teammates the best way I can,” Jefferson said. “I try to be the best teammate I can.”

“I feel like we’re still trying to get to know each other, as far as playing with each other," Dunn said.

St. John's had whittled an early 16-point deficit to two in the second half when the 7-foot Kalkbrenner strung together four baskets down low to spark a 22-4 run that put Creighton firmly in control again. Mahoney's 3 made it 74-54 with a little more than 6 1/2 minutes left.

Zegarowski, the Big East preseason player of the year, was 0 for 7 from beyond the arc in the loss to Marquette. But he was right on target this time, draining consecutive 3s to make it 80-58 with under five minutes remaining.

It was a bit of payback for the Bluejays, who led wire-to-wire at a nearly empty Carnesecca Arena on the St. John’s campus. Creighton was ranked No. 10 in the country when it got blown out 91-71 by the Red Storm in the same building last March.

In fact, St. John’s had won three of the previous four meetings — each by at least 15 points.

“We are still trying to get the `blue collar’ out of our basketball team,” second-year St. John’s coach Mike Anderson said. “Our guys last year, they took pride in their defense.”

The last time these teams were on the court together was March 12 for a Big East Tournament quarterfinal at Madison Square Garden. St. John's led top-seeded Creighton 38-35 at halftime when the rest of the tournament was canceled because of the coronavirus outbreak — nullifying the first-half statistics.

Turned out, Creighton and St. John's were the last two schools to start a game in the 2019-20 season. By the end of the day, the NCAA Tournament had been scrapped.

Duke transfer Alex O’Connell scored six points in 12 minutes off the bench in his Creighton debut. He missed an open layup early in the game.

“I thought he was really nervous,” McDermott said. “He’s got a lot to learn about our system.”

O’Connell just became available to play Wednesday when the NCAA granted all Division I transfers immediate eligibility this season.

Creighton: With balanced scoring from its veteran lineup, the Bluejays easily handled the Red Storm's pressure defense and rebounded nicely from their 89-84 loss to Marquette. Throw in a big bounce-back performance from Kalkbrenner, scoreless in five ineffective minutes against the Golden Eagles, and Creighton looked much more like a top-10 team that was picked second in the league's preseason poll and lost by only one at No. 5 Kansas last week.

St. John's: After opening 5-1 out of conference, St. John's has dropped its first three Big East games and is struggling on defense. With no fans permitted in the arena, the Red Storm were outrebounded 44-26 and handed a lopsided defeat in their first league home game.

“We have just got to get better,” Anderson said. "We have to watch film and get better.”

Creighton: Stays on the East Coast to play Sunday at Connecticut (3-0) in the Huskies' first Big East game since 2013. UConn has been dealing with COVID-19 issues and hasn't played since Dec. 3 after several games were canceled or postponed.

St. John’s: Will host Georgetown on Sunday night, the second meeting in eight days between the old rivals due to Big East schedule changes forced by the coronavirus. After leading by seven with under three minutes left in regulation at McDonough Arena last weekend, the Red Storm lost 97-94 in overtime. The rematch will mark the Hoyas’ first visit to Carnesecca Arena in Queens since the 1980-81 season — the year before Patrick Ewing arrived at Georgetown and Chris Mullin at St. John's. The programs have played at Madison Square Garden ever since.