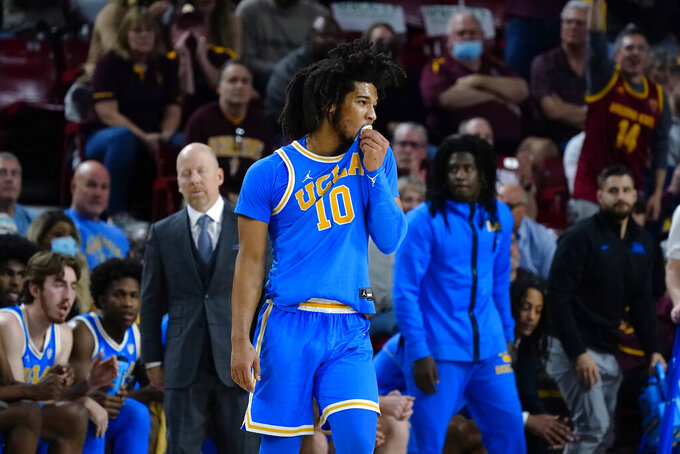 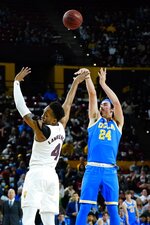 TEMPE, Ariz. (AP) — The announcements came at the end of regulation and each of the first two overtimes, telling fans not to rush the court.

When the time finally came, after Arizona State picked up one of its biggest wins under coach Bobby Hurley, the students waited behind a rope while UCLA's players left the court.

Once the rope came down, chaos ensued.

The Sun Devils set off a wild late-night court storming, outlasting No. 3 UCLA 87-84 in triple overtime Saturday for their third win over a top-3 opponent in 41 years.

“What all of us have been through for two years, it's good for everyone to enjoy a good moment,” Hurley said. “It was exciting to see that.”

UCLA rallied to force overtime, withstood Jackson’s 3-pointer at the end of the first extra period and DJ Horne’s corner 3 at the buzzer of the second.

Arizona State seemed to have the game put away, going up 84-78, but UCLA still had life. Jaime Jaquez Jr. scored on a layup with 16 seconds left and, after a Sun Devils turnover, Tyger Campbell hit a difficult layup with 7.2 seconds left to make it 86-84.

Jackson hit one of two free throws and Arizona State fouled Jaquez with 2.2 seconds left. Jaquez missed the first free throw and, after intentionally missing the second, Peyton Watson missed a wild 3-pointer at the buzzer to set off the delayed celebration.

“I've played in a lot of games in great atmospheres, but beating the No. 3 team in the country, I don't think it gets any better than that,” said guard Marreon Jackson, who led Arizona State with 24 points.

UCLA had its second straight shaky offensive performance after shooting 38% in a 76-66 loss to No. 7 Arizona on Thursday.

The Bruins struggled offensively for good chunks of the night, hitting one field goal in an 11 1/2-minute stretch spanning halftime and going through another six-minute span without making a shot. UCLA shot 37% overall, went 5 for 22 from 3-point range and got swept by the Pac-12's desert schools.

“There's a great responsibility when you play for UCLA and you're coming off a Final Four,” Bruins coach Mick Cronin said. “Teams can't wait to play you and we weren't ready for that this week.”

The Bruins looked as though they were back on track offensively against Arizona State. They turned to Jaquez early and the 6-foot-7 junior delivered, scoring 11 points in the first nine minutes as UCLA's offense flowed into a six-point lead.

The Sun Devils tightened up defensively after that and good looks were harder to come by. UCLA had a stretch of 6 1/2 minutes without a field goal and Arizona State closed the first half on a 13-4 run to lead 34-32. The Bruins made one field goal over the final 8:24.

“Their activity, their excitement to be in this game far exceeded ours for the first 25-30 minutes,” Cronin said. “Their energy, effort was off the charts.”

UCLA kept missing to open the second half — six straight — and Arizona State continued its run, pushing the lead to 42-32.

The Bruins later had a six-minute stretch without a field goal, but started piling up the fouls and free throws to keep Arizona State within reach. UCLA then hit four straight shots to go up 58-56 and the teams went back and forth over the final 2 1/2 minutes of regulation.

UCLA ran into a defensive wall in the desert, struggling to hit shots in both games. The Bruins could see a big drop in next week's AP Top 25.

Arizona State grinded down another opponent with its defense. The Sun Devils finally got rewarded for it with their biggest win of the season.

UCLA: Plays at Stanford on Tuesday.