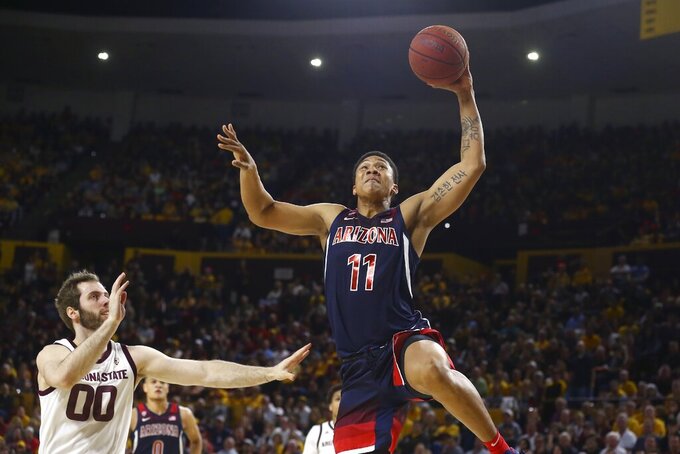 Arizona forward Ira Lee (11) goes in for a dunk as he gets past Arizona State forward Mickey Mitchell (00) during the first half of an NCAA college basketball game Saturday, Jan. 25, 2020, in Tempe, Ariz. (AP Photo/Ross D. Franklin)

TEMPE, Ariz. (AP) — Arizona State dug a deep early hole against its biggest rival. When the Sun Devils tried to shoot their way back into it, things only got worse.

Facing a second straight desert decimation against Arizona, the Sun Devils dug down defensively and got the ball into Alonzo Verge Jr.'s hands with the game on the line.

Verge Jr. delivered, scoring on a layup with 10.9 seconds left after Remy Martin led Arizona State's comeback, lifting the Sun Devils to a 66-65 victory over No. 22 Arizona on Saturday night.

“It was a pretty special night out there,” Arizona State coach Bobby Hurley said. “It wasn't shaping up that way early, but it shows a lot of heart. We've been in a lot of tough games and we showed our will, determination and grit.”

The Wildcats (13-6, 3-3 Pac-12) won the first meeting in a rout and shook off a shaky start in the rematch with a massive run, building a 22-point lead midway through the first half.

The Sun Devils instead became the aggressor, storming back with a 16-0 run spanning halftime to put a charge into an already-lit-up home crowd.

The rivals traded blows and baskets the rest of the way, neither able to pull away until Arizona State got the ball to Verge. Getting the ball after Rob Edwards couldn't get a shot, the junior college transfer saw Arizona's defense open up, drove to the basket and, with a flick of the wrist, spun the ball off the glass.

Arizona got a final look, but Josh Green was bumped and couldn't get a shot to the rim.

Martin finished with 24 points, Edwards 15 and Verge added 13 — none bigger than his final two.

“It's at the highest level of basketball against our biggest rival — it's a good feeling,” Verge said.

Arizona dominated most of the the first half, but let the Sun Devils keep within striking distance with their late first-half run. The Wildcats' offense labored in the second half — 22 points — and the ball-screen defensive success they had in the first half struggled in the second.

Zeke Nnaji had 21 points and 10 rebounds, and Nico Mannion added 16 points for Arizona.

“We're not a confident group,” Arizona coach Sean Miller said. “It's about performance. You have to grade our team, me as a coach and our players on how we do, not what we're supposed to do.”

Arizona won the first meeting by 28 points by utilizing its size inside to score more points in the paint (50) than Arizona State had total (47).

The rematch shot off the line like a drag race, both teams playing at a breakneck pace.

The speed-up caused the turnovers to pile up; seven combined in the first 4 1/2 minutes. The shooting wasn't great, either, the rivals combining to miss 14 of their first 21 shots.

Arizona settled down after that, Arizona State became frazzled.

The Wildcats kicked their free-flowing offense and transition game into another gear, going on a 22-1 run to go up 34-13. Nnaji had eight points and Mannion a pair of 3-pointers during the run.

Arizona State went 6 1/2 minutes without a field goal, but, with a couple of short runs, cut Arizona's lead to 43-30 at halftime.

The Sun Devils scored the first seven points of the second half — completing a 16-0 run — to pull within three.

What surely seemed headed toward another rout suddenly turned into a game. The Sun Devils made the biggest plays when it mattered most, picking up a marquee victory while keeping their rival winless on the road.

“We could have put it to bed in the second half, but we failed to make those plays,” said Arizona's Dylan Smith, who had 10 points. "We've got to grow up and that's how college basketball is.

Arizona went flat after building its big league, allowing the Sun Devils get to back in the game and a split in the season series.

Arizona State bounced back from its letdown in Tucson, rallying from a huge deficit to pick up one of its biggest wins of the season.

Arizona State had no answer for Mannion in the first half, allowing the freshman point guard to hit four 3-pointers and score 12 points.

Led by Martin, the Sun Devils held Mannion to four points and had him in foul trouble in the second half.

“He has great confidence in himself,” Miller said of Martin. “He was the difference between the two teams tonight.”