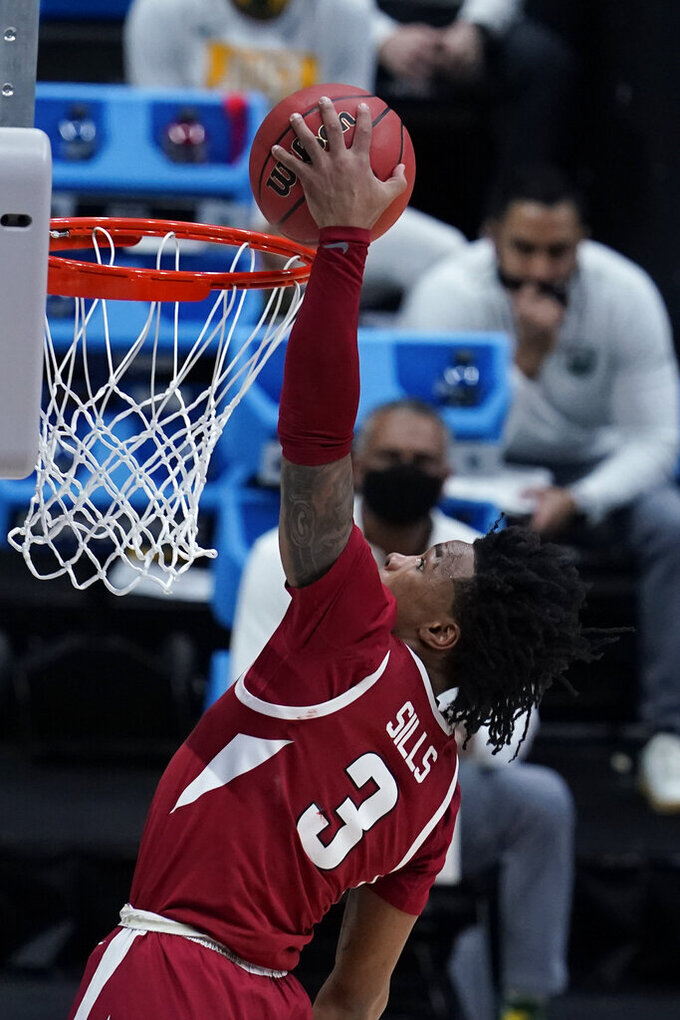 Arkansas guard Desi Sills (3) dunks against Baylor during the first half of an Elite 8 game in the NCAA men's college basketball tournament at Lucas Oil Stadium, Monday, March 29, 2021, in Indianapolis. (AP Photo/Michael Conroy)

For once, the comeback kids from Arkansas didn’t have an answer. Pulling off yet another double-digit rally wasn’t going to happen against top-seeded Baylor.

Arkansas’ NCAA Tournament run ended with an 81-72 loss to Baylor in the South Region final on Monday night.

The Razorbacks were overwhelmed by early pressure from the Bears, finding themselves facing another big deficit. After pulling within four midway through the second half, Arkansas went cold from the field, missing 12 straight shots and going more than eight minutes without a made basket.

The wait to see the ‘Hogs back in the Final Four will continue.

“Just want to give Baylor a ton of credit. I thought that they played phenomenal tonight, especially offensively,” Arkansas coach Eric Musselman said. “Our locker room gave us all they could, came up empty. We’ve had a great two months, played at a very high level, but tonight just have to give Baylor credit.”

The Razorbacks (25-7) had lived on the edge of elimination throughout the NCAAs. They trailed Colgate by 14 in the opening round. They fell behind by 10 to Texas Tech in the second round and trailed Oral Roberts by 12 early in the second half in the Sweet 16.

Being comfortable playing from behind was a foundational block created by Musselman in his second season. The Razorbacks had seven games during the season where they trailed by 10 or more and came back to win, then did it three times to start the NCAAs.

But the Bears were too talented and disruptive to allow the Razorbacks yet another comeback victory.

“We’ve been doing that all year. I’m not sure why it happens, but it’s really hard to come back, especially from down 18,” Arkansas guard Jalen Tate said. “I didn’t even know we were down that much at one point in the game, but it just shows the resiliency of this group.”

JD Notae led the Razorbacks with 14 points, providing a needed spark off the bench in the first half to keep Arkansas close. But Notae fouled out with more than 13 minutes remaining after picking up two fouls in 20 seconds.

Davonte Davis had 14 points and Tate added 13, but leading scorer Moses Moody was held to just 11 points on 2-of-10 shooting. The Razorbacks shot just 37% in the second half and didn’t make a 3-point attempt in the final 20 minutes.

“We played extremely hard but lacked some scoring at times,” Musselman said.

Arkansas was trying to return to the Final Four for the first time since 1995 when the Razorbacks chances at back-to-back titles was stymied by UCLA in the national championship game. Getting into a regional final in just the second year under Musselman was a remarkably quick turnaround for the Razorbacks, which two years ago went just 18-16 and had not played on the second weekend the NCAAs since 1996.

The onslaught by Baylor was immediate and unrelenting. It took the Bears less than four minutes to build an 11-point lead and the deficit was 18 midway through the first half.

The Razorbacks pulled within 53-48 early in the second half, but the Bears quickly pushed the lead back to 12 and the risky decision by Musselman to leave Notae on the floor with four fouls backfired.

Notae picked up two fouls in 20 seconds, the last one on a charge call with 13:38 left for his fifth foul. The spark that kept the Razorbacks within range in the first half angrily became a spectator the rest of the night.

Even without Notae, the Razorbacks refused to fold. Moody’s layup in transition with 9:34 left pulled Arkansas within 62-58, the closest it had been since the opening minutes.

But the Razorbacks could never inch closer. Arkansas missed 12 straight shots after Moody’s layup and while Baylor didn’t run away, MaCio Teague’s consecutive 3-pointers with less than five minutes left were the final hammers in the Razorbacks’ hopes.

“You can’t say enough about this team," Tate said. "Obviously we want the outcome of the night to go different, but I think this team, when we get back and give us some time to heal a little bit you’ll remember everything we did.”