Baylor back from pause, resumes bid for undefeated season 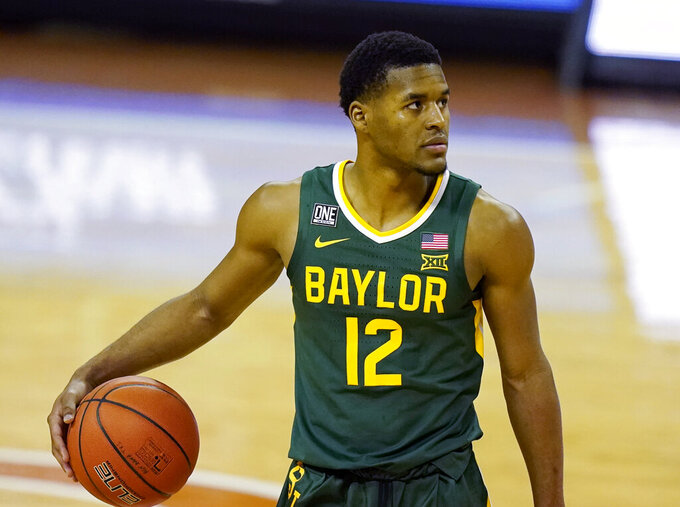 FILE - In this Feb. 2, 2021, file photo, Baylor guard Jared Butler controls the ball during an NCAA college basketball game against Texas in Austin, Texas. Butler and still-undefeated No. 2 Baylor are ready to get back to playing games after a three-week break because of COVID-19 issues in the program. (AP Photo/Eric Gay, File)

Baylor is back in its bid for an undefeated season.

It won't be an easy return.

The No. 2 Bears return from a lengthy COVID-19 pause this week with three games in five days.

Baylor returns to the court for the first time in three weeks Tuesday against Iowa State. The Bears have a day to get ready for No. 10 West Virginia, and play again two days later at No. 17 Kansas.

“I’d like to believe that we’re going to pick up where we left off,” Baylor junior guard Jared Butler said. “It’s going to be a little hard in the first few minutes just to get our wind back, but I think ultimately, we’re going to get back in our groove.”

The opening game against Iowa State should allow the Bears to ease back into the flow of live games. The Hawkeyes are 2-16 and 0-13 in Big 12 games.

It gets a whole lot tougher after that.

West Virginia moved back into the top 10 this after beating Texas last week and is one of the hardest-playing teams in college basketball.

The Bears then have to play in one of the game's toughest road venues, Allen Fieldhouse.

They're also catching the Jayhawks at a bad time. After struggling last month to drop out of the AP Top 25 for the first time in 232 weeks, Kansas has has won five straight, including over No. 18 Texas Tech and then-No. 23 Oklahoma State.

The Jayhawks will be coming off a game against No. 14 Texas on Thursday.

“Seeing everybody else play, I kind of feel like I’ve been missing out,” Butler said. “What do you call it when your parents punish you and you can’t go outside and play with your friends? That’s what it’s been feeling like.”

No. 3 Michigan and No. 4 Ohio State played one of the season's best games on Saturday, a 92-87 Wolverines' win.

Both teams have another top-10 game this week, against the same opponent no less.

Michigan (16-1, 11-1 Big Ten) faces No. 9 Iowa on Thursday in what's sure to be another high-level game. The Wolverines also face Indiana on Saturday.

The Buckeyes play struggling Michigan State on Thursday, then host the Hawkeyes on Sunday.

Both will be must-watch games.

No. 9 Alabama has a chance this week to do something it hasn't accomplished in 19 years: clinch the Southeastern Conference regular-season title.

The Crimson Tide can clinch at least a share of the title Wednesday at No. 20 Arkansas. The Razorbacks have been on a roll lately, moving up four spots in this week's poll after stretching their winning streak to four games.

Alabama then plays at Mississippi State on Saturday in the rematch of an eight-point Crimson Tide win earlier this season.

Gonzaga's bid for an undefeated season could close this week, barring any additions to the schedule.

The West Coast Conference tournament is scheduled to start March 4 in Las Vegas. Gonzaga will be the top seed, so it won't start until the semifinals on March 8.