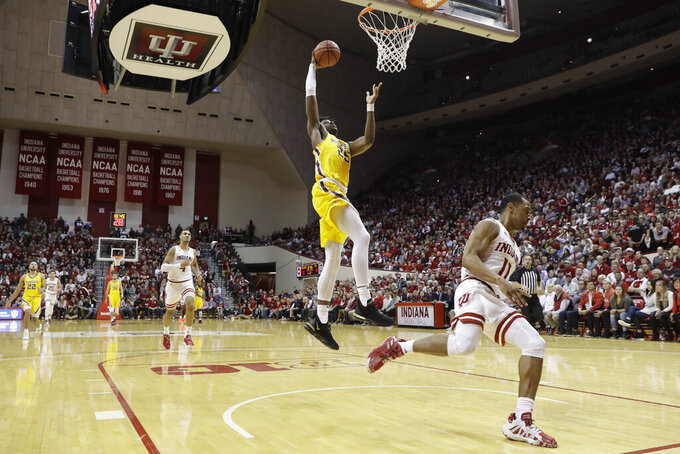 Minnesota's Daniel Oturu (25) goes up for a dunk against Indiana's Devonte Green (11) during the first half of an NCAA college basketball game, Wednesday, March 4, 2020, in Bloomington, Ind. Indiana defeated Minnesota 72-67. (AP Photo/Darron Cummings)

MINNEAPOLIS (AP) — All those late-game lapses over the past month pushed Minnesota way off the NCAA Tournament bubble, forcing the Gophers to win five games in five days this week just to get in.

This last-chance challenge at the Big Ten Tournament stretches beyond a postseason bid, too. Star sophomore Daniel Oturu has developed into NBA first-round draft stock, with the possibility he will turn pro this summer. Then there's the status of seventh-year coach Richard Pitino, whose record in regular-season conference play is 48-82.

Pitino has taken the scrutiny in stride, exhibiting no tension when the subject of his job security has been raised by reporters, but the two-year contract extension he received after his first NCAA Tournament victory last season hardly guarantees his return for 2020-21.

“We are business as usual. We’ve got a young team, and we played a tough schedule. Guys are giving me their all,” Pitino said last week.

The Gophers, who finished 12th in the Big Ten, face Northwestern in Indianapolis on Wednesday. They lost six of their last eight games, with an average margin of defeat of 4.8 points in that stretch. Whether due to a lack of depth or a shaken confidence or some other factor, the Gophers just weren't able to stop their late-season slide.

“We believe we can play with anybody,” point guard Marcus Carr said on Tuesday. “I know we didn’t get enough wins, but if you were watching any of our games, in most of our games you could tell that we were right there.”

The tournament draw for the Gophers, at least, makes the task look a little less daunting.

They beat Northwestern handily twice, and they would advance to face No. 5 seed Iowa with a win. The Gophers lost to the Hawkeyes twice, but they were outscored 11-0 over the final 5:25 of a 58-55 loss on Feb. 16. The Hawkeyes have lost three of their last four games.

The opponent in the quarterfinals would be No. 4 seed Illinois, against whom the Gophers trailed by one point with 90 seconds to go in an eventual defeat on Jan. 30. Then the bracket would match them up with No. 1 seed Wisconsin, if the Badgers were to win their opening game. The Gophers beat them 70-52 at home last month. More recently on the road, they led until 30 seconds remained before falling 71-69.

So what about the NIT? Minnesota won the event in 2014, Pitino's first year, after all.

Well, the Gophers (14-16) must reach the Big Ten semifinals on Saturday to avoid a losing record, which once prohibited a team from being selected by the NIT.

Since the NCAA assumed control in 2006 of the consolation tournament, there has been no minimum-.500 policy. Though a losing team has yet to be selected, if the Gophers were to win two games in Indianapolis and finish 16-17, they have the profile to at least warrant consideration for a bid to become the first. Last year, both Butler and Texas were picked for the 32-team NIT with 16-16 records.

Minnesota is 29th in the KenPom ratings, with the fourth-worst luck in the nation based on deviation from actual winning percentage to expected results through analyst Ken Pomeroy's various metrics. That's the highest the Gophers have been under Pitino. They're 33rd in ESPN's Basketball Power Index, with the second-strongest schedule in the country by the BPI's measure.

“The beauty of sports is you just never know, so you embrace that opportunity,” Pitino said.