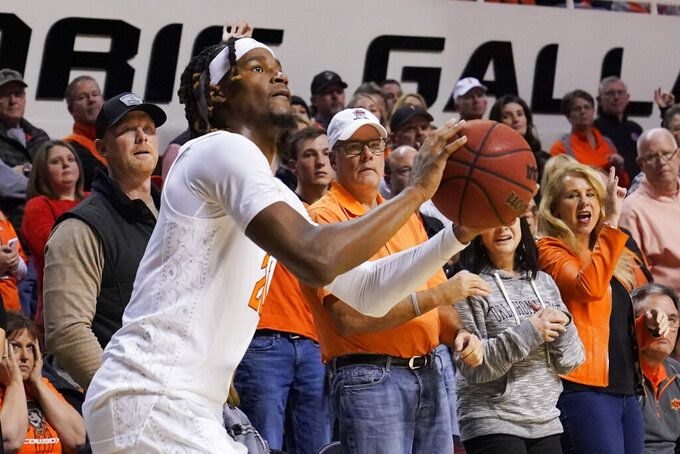 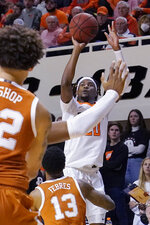 STILLWATER, Okla. (AP) — Keylan Boone came off the bench and scored a career-high 17 points, shooting 5 for 7 on 3-pointers and sending Oklahoma State past No. 14 Texas 64-51 Saturday.

It was a nice bounce back for Oklahoma State, which was battling close with No. 6 Kansas on Tuesday before the Jayhawks pulled away late to win 74-63.

“I’m really proud of our kids,” Cowboys coach Mike Boynton said. “Tuesday was really hard for us. We just let go of the rope a little bit in the second half the other night. Tonight was different. We gave ourselves a chance because we kept defending. Our defense got better and then we did a much better job of taking care of the basketball and taking quality looks. I’m proud of their response.”

Boone scored 11 points in the first half, then connected on two crucial 3-pointers in the final 2:40, including a shot with 1:26 remaining to give the Cowboys their biggest lead of the game to that point, 62-51. He also had six rebounds.

“Just taking full advantage of what I can get,” said Boone, who hadn’t hit double-digit points since scoring 11 on Nov. 16 in an 80-58 victory over UMass-Lowell.

“It all goes back to my teammates. They trust me. I’m not making plays off the dribble, I know my role. They were just believing me and getting me shots, I just have to get to the areas where I’m used to shooting," he said.

“Offensively, we just couldn’t get into a rhythm,” coach Chris Beard said. “We fell in love with the 3-point shot we couldn’t get to the free throw line. You got to give them credit. Obviously, there’s some things that we’ve got to do better.”

Allen’s basket with 4:05 remaining pulled the Longhorns within 51-49, but Oklahoma State closed on a 13-2 run.

Oklahoma State held Texas star guard Marcus Carr, who had averaged 19.5 points in his two previous games, to just four points on 1-for-6 shooting, as Williams guarded him closely. Overall, Texas shot 50 percent (12 for 24) in the first half, but just 29.6 percent (8 for 27) in the second.

“I thought Marcus played hard tonight, he was dialed in,” Beard said. “He took great shots. You know, maybe if one or two of those go, it’s a different game but that’s basketball. Us winning or losing tonight isn’t all Marcus. It’s on everybody.”

Minus Carr's production, the Cowboys were in charge.

“We just wanted to limit any of his playmaking and make somebody else make the play,” Boone said of containing Carr. “We just had Bryce on him the whole time and he was doing his thing. We trusted in him and we see how that went.”

Texas: For the second straight game, the Longhorns trailed at halftime (after facing a deficit at the break just once in their first 13 contests), but this time, their second half comeback attempt fell short. Texas never once held the lead. Only once did they even get to within one point, when Courtney Ramey’s 3-pointer with 8:50 left in the first half pulled them within 13-12.

Oklahoma State: The Cowboys led for the entire first half, jumping out to early leads of 6-0, 11-5 and then pushing their advantage to 26-17 when Boone connected on his third 3-pointer in a three-minute span with 5:33 left in the opening half. But Texas closed the half by outscoring Oklahoma State 11-4 to pull to within 30-28 at halftime. The Cowboys got just 13 points combined from their five starters in the first half and were outrebounded 17-12. They did much better in both categories in the second half with 25 points and beating the Longhorns 24-16 on the boards.

Allen became just the sixth active Division I player to surpass 1,500 points, 600 rebounds and 300 assists for his career. He entered the day nine points and two assists shy of the mark and came through with 10 and three, respectively, along with six rebounds and three steals. Overall, he now has 1,501 points, 637 rebounds and 201 assists.

For the second straight game, Texas did not attempt a free throw in the first half. In their previous outing, a 70-57 win over Kansas State, they shot 13 of 18 from the line in the second half. In this one, they went 5 for 7 from the line after halftime. … Oklahoma State committed just nine turnovers while forcing Texas into 14. The Longhorns entered the day ranking third in the nation with a + 7.0 turnover margin and 22nd with 17.43 turnovers forced per game.